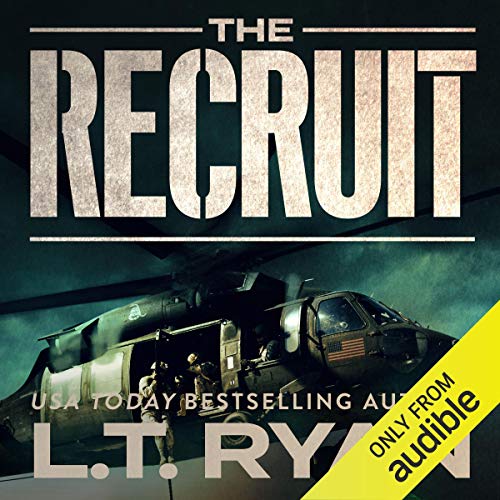 In late summer of 1994, Jack Noble, a former All-American quarterback, is in the middle of the toughest event he's ever taken part in: marine corps recruit training. After eight weeks he's managed to make enemies of every drill instructor and every recruit in his platoon. Then on one particularly humid South Carolina day, an odd sequence of events changes everything. Contains an excerpt of Noble Intentions: Episode 1.

What listeners say about The Recruit

This is my first intro to this group of books by Ryan and I have immediately lined up the entire series into my wish list. Can’t wait to get started.

Although this was a short story it was still worth a listen to as it starts the rest of the stories of.

Title of review says it all, it needs a follow-up book. The ending seemed a bit like a cop out but appart from that it was well written and had a good structure and story to it.

A Short... really short story. This is Jack Noble as a marine recruit. The DI's give him a really hard time, they get Bear to fight him, Bear loses and the DI's go after Bear. Jack goes to help Bear and that is how they meet. This is the beginning. The very beginning... very short beginning.

It wasn't a bad short, just really extremely short. It could have been expanded a bit I think. Narration was not bad.
#Military #ShortStory #Prequel #Tagsgiving #Sweepstakes

This short story is set in US Marine boot camp where Jack Noble meets Riley "Bear" Logan for the first time. It is not Book 12 in the series as Audible lists it.

I've listened to the whole Jack Noble series, and this short story sets the perfect tone for the rest of the series. Wonderful/Amazing author and the narrator is a bad ass. Keep up the great work you two.

Good but too short

I like the story and the narrator did a great job. I just wish there had been more to it. I'm looking forward to the rest of the series.

I love to listen to this character and storyline. But so shocked and saddened at the fact it was a short story!!!! Amazon, Kindle, and Audiobooks should state its a short story. So that when you purchase your not heart broken at the sudden ending. It’s literally like someone tore the last chapter from the book. 🥴

I wasted my credit for what should have been free. Cute story great for a comic book. Audible should be embarrassed!

Narration was spot on.

Noble is in boot camp. Has a Drill Instructor, Koslowsky, with a grudge against him. He puts "Bear", the biggest man in the camp against Noble. When Bear loses the fight, the officer decides to further harass Bear. Noble comes to Bear's aid. A partnership is born....Becoming Noble begins

Great, but too short

I wish this had been a complete book in the 9 to 12 hours range.

I wasted a credit on a 30 minute story, and it pisses me off. This flashback could of been in any of the other books. I feel cheated by this short story. I have listened to every book in this series, and it sucks to end it this way. Very disappointed!!

Interesting intro to the series. Full of intrigue and excitement. Also, the hazing was very apparent