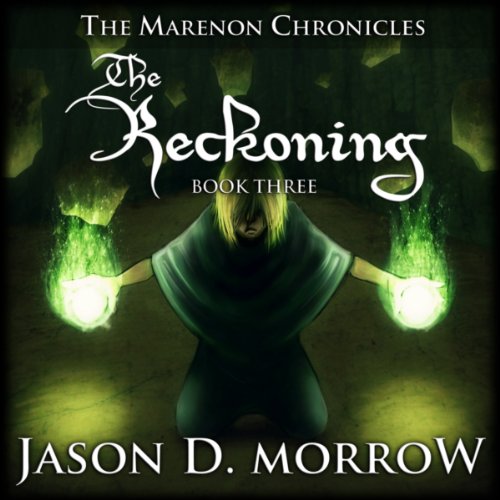 Held in a dark cell in the heart of Mudavé, Silas Ainsley, the Deliverer of Marenon, meets a new enemy: the Possessor. Silas knows it won't be long before the Stühocs try to kill him, or worse, turn him into an enemy against the very people he is meant to help.

Julian Hobbes has left the throne in Farlaweer in search of the last two medallions of power, knowing that once he has all six, he will be able to use the ultimate weapon against the Stühocs.

With three of the Dunarian council members dead, the Stühoc king, Anithistor, has charged Alric Thirsk with the task of finally destroying the Dunarians for good by killing their leader, Kaden Osric. If Alric fails, his friends will suffer a most torturous fate.

Though the Stuhocs are winning the war, Silas has a dream about a man in Mudavé who claims he can help Silas defeat Anithistor and the Possessor. That man also claims to be Silas' father.

What disappointed you about The Reckoning?

All three books have the same Narrator, who has a fine voice. However, his interpretation of some of the characters is not very good. And the repeats of lines is horrible! All it would have taken is some editing to fix these and I would have given him a 3. But, since so many lines or parts of lines were repeated, several instances come up where he cleared his voice. I finally had to revert to reading a large portion of it. I plan to get my money back on these because its not worth keeping these in my library!

What was one of the most memorable moments of The Reckoning?

Great story overall. I really enjoyed the end. It was well done.

What character would you cut from The Reckoning?