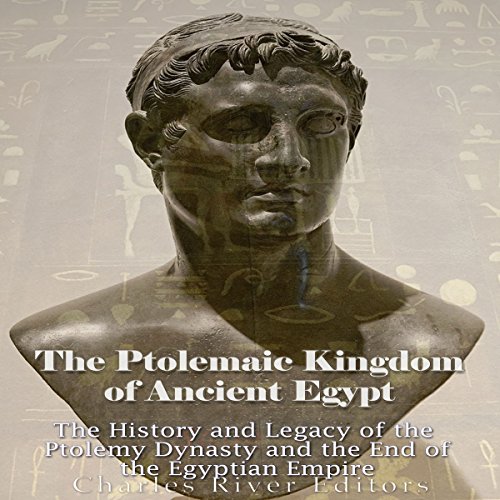 The Ptolemaic Kingdom of Ancient Egypt

The History and Legacy of the Ptolemy Dynasty and the End of the Egyptian Empire
By: Charles River Editors
Narrated by: Scott Clem
Length: 1 hr and 32 mins
Categories: History, Ancient
2.5 out of 5 stars 2.5 (2 ratings)

The Ptolemaic Kingdom of Ancient Egypt

Among all the periods in ancient Egyptian history, the Ptolemaic Kingdom and its most famous ruler, Cleopatra, may be the most well-known today. By the 4th century BCE, it appeared as though ancient Egypt was in its final death throes. It had long ceased to be an influential kingdom in the Near East and Mediterranean regions, and it had been ruled over by a succession of foreign peoples including Libyans, Nubians, Assyrians, and Persians. But just when Egypt seemed was doomed to pass forever into obscurity, it was reinvigorated by outsiders, most notably Alexander the Great. While in the process of campaigning to destroy the Achaemenid Persian Empire and conquer the world in 331 BCE, he made a pit stop in Egypt that forever changed the course of Egyptian history. Although his understanding of ancient Egyptian chronology and religion was minimal, Alexander was intrigued by ancient pharaonic culture, knowing, as the 5th century BCE Greek historian Herodotus once wrote, “Egypt is the gift of the Nile.” As a result, Alexander endeavored to incorporate the land of the pharaohs into Hellenic Civilization.

Although Alexander never lived to rule over Egypt, one of his generals, Ptolemy I, did, and it was he who established the last great pharaonic dynasty in Egypt, known as the Ptolemaic Dynasty. The Ptolemies gave ancient Egypt an injection of vitality that had not been seen in the Nile Valley for centuries, preserving many aspects of native Egyptian culture while adding their own layer of Hellenic culture. The first few Ptolemaic rulers proved as able as any of their Egyptian predecessors as they worked to make Egypt a first-rate power in the world once again. Unfortunately, these able rulers were followed by a succession of corrupt and greedy kings, more concerned with personal wealth and power than the stability and greatness of their kingdom. Eventually, Ptolemaic Egypt collapsed due to weak rulers, internal social problems, and the rising power of Rome, but before the Ptolemaic Dynasty was extinguished, it proved to be one of the most impressive royal houses in ancient Egyptian history.

The end of the Ptolemies also happened to coincide with the most famous period of Roman history. In the latter 1st century BCE, men like Julius Caesar, Mark Antony, and Octavian participated in two civil wars that would spell the end of the Roman Republic and determine who would become the Roman emperor. In the middle of it all was history’s most famous woman, Cleopatra, who famously seduced both Caesar and Antony and thereby positioned herself as one of the most influential people in a world of powerful men.

a fine overview of the individual kings and queens, not a great narrator, a lot of incorrect pronounciation and muddled words.