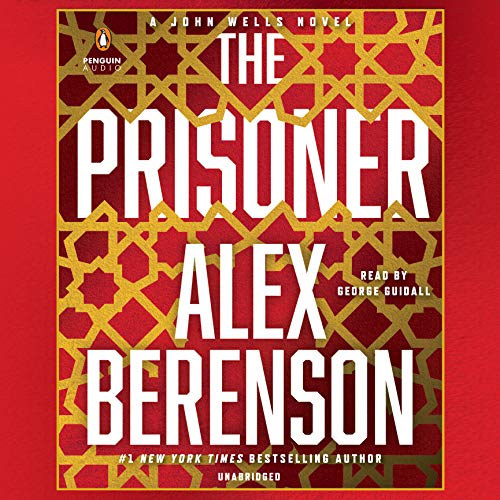 By: Alex Berenson
Narrated by: George Guidall
Try for £0.00

To unmask a CIA mole, John Wells must resume his old undercover identity as an al Qaeda jihadi - and hope he can survive it - in the new cutting-edge novel from the best-selling author.

It is the most dangerous mission of John Wells' career.

Evidence is mounting that someone high up in the CIA is doing the unthinkable - passing messages to ISIS, alerting them to planned operations. Finding out the mole's identity without alerting him, however, will be very hard, and to accomplish it Wells will have to do something he thought he'd left behind forever. He will have to reassume his former identity as an al Qaeda jihadi, get captured, and go undercover to befriend an ISIS prisoner in a secret Bulgarian prison.

Many years before, Wells was the only American agent ever to penetrate al Qaeda, but times have changed drastically. The terrorist organizations have multiplied: gotten bigger, crueler, more ambitious, and powerful. Wells knows it may well be his death sentence. But there is no one else.

"The Prisoner reinforces Berenson’s status as one of today’s steadiest practitioners of quality spy fiction...The action culminates smartly [and] Wells is an appealing combination of brains and brawn.” (Publishers Weekly)

What listeners say about The Prisoner

A belter of a thriller

Gripping,full of suspense and intrigue
Clever storytelling with good characters
I thoroughly enjoyed this audio book and would put it in the same category as "I am Pilgrim" and "Nomad"
I am now looking into more form this author

Another Winner from Berenson

If you love thrillers, than you have probably already discovered Alex Berenson’s John Wells series, and you already know Well’s backstory. If not, I recommend that you start at the beginning of this series, with “The Faithful Spy,” and, ideally, listen to all the prior episodes in this series before beginning “The Prisoner.” Otherwise, this audiobook might seem to move a bit quickly.

Like most thrillers, “The Prisoner” tells a fantastic story involving a super-human protagonist in an impossible situation. Berenson enriches this recipe with his encyclopedic knowledge of history, government, geo-politics, current events, and geography. He seasons the pot with more than a dash of cynicism and good writing skills. All his descriptions of locales — which, by the way, span the globe in this series — convey spot-on detail and accuracy, conjuring up a vivid movie in the listener’s mind’s eye.

In “The Prisoner,” we get to know the identity of the CIA mole almost from the beginning of the story, while John Wells and Ellis Shafer must struggle against the clock for the rest of the book, trying to track the traitor down. Berenson gives us some understanding of the mole’s motives for betraying his country — if not for his methods — by describing the horrors that he witnessed the CIA perpetrating in Iraq and Afghanistan. (“Buy off anyone who is for sale, and kill the rest.”) We also get disturbingly vivid descriptions of the even worse horrors that the Islamist jihadists are perpetrating on those who hold opinions or ideologies that differ from their own. (We can clearly see the source of Berenson’s cynicism.)

As always, masterful George Guidall delivers an excellent performance of “The Prisoner,” with his beautiful, mature voice, perfect timing, and subtle inflections.

All of the John Wells novels are high entertainment, as is this one. However, the end of this story (no spoilers) took took the path of least resistance, which is quite unlike the previous Wells novels that leave the listener at the edge of their earbuds to the last paragraph. Stuff was just too easy for Wells in the end, even to the point of finding the bad guys in a city of millions by chance...feh!

I smell a rat! This is what happened to Craig Johnson novels before his books went into television syndication. Johnson either got lazy or his TV editors starting working him over in a back alley. Berenson is starting to show signs of heavy-handed editing, as if his creative juice sputters out when the publisher says, "Hey, Alex, your year is up!...where's my script!!"

Prediction...expect a TV Series or Film in the next year.

I give this novel one Makarov up and one down.

Not as good as some of the earlier ones.

Where there was obvious suspense, it didn't grip me or make me feel it. I could put it down and did for a certain amount of political news. I really like the character of John Welles and George Guidall as a reader - I didn't feel Alex Berenson gave them as interesting a plot or others I've read. ISIS was in there but there was more stylization than depth. Cute - Puma as the code name of the lead ISIS cell - and of course linked with a sneaker store - etc. I'll read the next Berenson (probably) but without the same certainty that I jumped for this one.

Loved it Berenson is funny and writes a thrilling book akin to Greaney's Gray Man. Read them all and this was top 20, top 2-3 in series.

The Prisoner is the 11th novel in Alex Berenson's John Wells espionage series. Earlier books in the series have dealt to a limited degree with Wells' personal life (specifically his ex-wife and his teenage son and his on and off conversion to Islam), but in this one for two years Wells becomes thoroughly domesticated with essentially a common law wife and their newborn daughter as he becomes a full time dad. He and his "wife" are even discussing making their daughter a little brother. But then his old CIA handler Ellis Shafer calls saying his country needs him for a job only he can do (Wells is fluent in Arabic and has physical features that appear to be Arabic). And the new president replacing Barack Obama is is an old CIA Director Vinny Duto with whom Shafer and Wells have bad relationships.

Earlier in his career Wells went undercover as an al Qaeda operative for a long period. He takes that name again and attempts to join ISIS in Afghanistan. There is known to be an ISIS mole in the CIA but his identity is unknown. The plan is for Wells to get arrested and sent to a secret Bulgarian prison which is also a CIA black site. Wells becomes the prisoner in the title.

The Prisoner has lots of ISIS terrorist activities including the planned use of sarin nerve agent for an attack at a state funeral in France where many foreign leaders are present. But what is different about this novel is the portrayal of the more human side of John Wells. Action and suspense are present in large amounts. Narration is by George Guidall as usual and it is stellar. The Prisoner has my highest recommendation.

Not one of his better books. Found myself regularly loosing interest. Don’t think I will listen to anymore John wells series

Whilst the danger was totally plausible, the plot was not!

Suffice to say that the book’s cliffhanger is dependent on French security services being unlikely to believe a tip-off from the CIA about an imminent threat.. so whilst the danger was totally plausible, the plot was not!
But I’m so invested in this series, I have no choice but to go onto the next book!!

Another great adventure for John Wells

John Wells is back! He is, in fact, the title character in this book. And he volunteered for it. Oh, John.

As usual, Wells jumps right in when needed. It's good to know he still has Ellis watching his back, especially now that Vinnie Dutto is President. Yeah, that Vinnie! There's a mole in the CIA and it takes John back to Afghanistan, Bulgaria, and Paris (after a short trip or two to London) to figure it out. In the meantime, Ellis is doing his own investigation. And will they find out in time to stop a pretty well organized terror attack?

I liked the book. I've always liked Anne and I hope she's around a lot more. There's added incentive for John to make that happen. This was a great read (listen) and I look forward, as always, to the next book. The narrator, George Guidall, is brilliant as usual!

What does George Guidall bring to the story that you wouldn’t experience if you just read the book?

His ability to make all the characters come to life. Outstanding

The birth of his daughter

The Prisoner keeps John Wells in the action and makes you wonder just how much longer he will really keep doing this. He long ago left the job that brought him back into this situation, where long time readers first saw him. John is back under cover trying to stop the destruction of America by taking down jihadis from within. George Guidall's narration was as good as the plot. John has been a long lasting, good character, but it is coming time for a new hero.