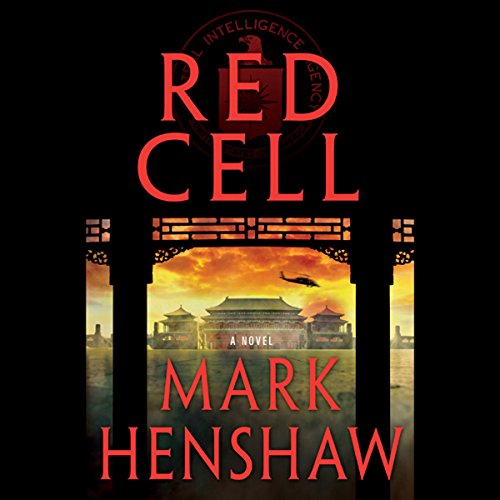 Red Cell follows Kyra Stryker and Jonathan Burke, two outcasts in the Agency who are brought together in the Red Cell, the agency’s out-of-the-box think tank. Stryker is a young and beautiful agent who’s struggling to recover from a job gone bad during her first assignment in Venezuela, while Burke is a straight-laced analyst who’s pissed off all his colleagues with his knack for always being right, political consequences be damned.

When a raid on Chinese spies in Taiwan ends in a shootout, CIA Director Cooke turns to the Red Cell to figure out why China is ready to invade the island nation without any fear of reprisal from the U.S. Navy. Stryker and Burke’s only lead is the top CIA informant in China, codenamed Pioneer, and they’re tasked with extracting him before the Chinese can get to him.

From the White House to a Navy battleship in the South China Sea, Henshaw takes listeners on a whirlwind race against time as Stryker and Burke try to save Pioneer and discover the hidden threat to America’s power and keeping the peace, China’s top secret weapon, the Assassin’s Mace.

Buy the Book Not the Audio

The story was good and I wish I had read the book. The narrator was in such a hurry and he didn't vary the voices or the narrated portions at all. I can't remember the last audio book that was this poorly narrated. I'm spoiled by all the other great narrators and I'll remember to avoid ones Rob Patterson does unless he improves. The story was pretty good, however.

I've been an Audible member for over ten years (607 downloads) and I'm hard pressed to think of a worse read than this one. Every conversation sounded the same, whether deciding what to eat for dinner or staring down an incoming missile. Men, women, Americans, Chinese, all sounded the same. This was particularly frustrating when men and women were talking because you had to listen especially hard to figure out who was who.

I don't know who Rob Patterson is and what he's done before, but it's as if they pulled some random guy off the street and said, "here, read this novel." "Never done it before?" "No problem."

The biggest shame is that the story is actually quite good. Put in the hands of even a competent reader, and it would have been fabulous. As it was, I put this down three or four times and had to push myself to finish it.

The book was quite good. Interesting subject, the story seemed well researched and therefore very plausible.

But, this is one of the few times I have been very disappointed with the reader of an Audible book. It was read in a monotone, almost computer like way, lacking any kind of understanding of what was being read. Especially dialogues were very difficult to follow. My apologies to the reader, but it just was very distracting.

not enough for me

I stopped after giving this a good try. The moment I realized that the narrator was not even attempting to change his voice for the different characters, I'd had enough. The story seemed adequate, but not enough to override the 'reading' rather than 'acting' of the narrator. Makes me appreciate even more the excellence of so many narrators. When I first started audiobooks, I was surprised to hear the words 'performed' used to what I thought was just being 'read'. But I see the better ones truly are doing exactly that and making the audio experience as good as or better than reading the same book yourself.

Yes - An engaging story with interesting characters that are satisfying my Alias, La Femme Nikita, Person Of Interest withdrawls.

But I'd also give them a heads up about the narration style.

I almost put down the book several times due to the narrator's stilted, robotic reading. Really distracting. However, the story hooked me; every time I was ready to put it down, I just gritted my teeth (or sped up the recording to 'chipmunk mode') because I wanted to hear more about Kyra and Jon.

Red Cell marks the evolution of the spy novel from Soviet / cold war era through terrorism to now China as the major threat. "Red" teams are typically structured as sparing partners for war gaming. Here, the "red cell" consists of a CIA intellectual renegade and a rookie covert operative on the losing end of poorly planned (but not executed) mission. Together they piece together a series of disparate clues that point to a far more organized and complex Chinese attempt to takeover Taiwan with geopolitical ramifications.

The pacing is excellent with a back and forth between covert operations and analytic breakthroughs. Both main characters also get opportunities to perform beyond their assigned roles. There are no real surprises, but the action is nonstop, especially in the second half. Perhaps the only criticism is the scene shifting within chapters that comes off as a cinematic attempt at parallel editing, but results mostly in a disjointed delivery.

The narration is excellent with a quite respectable range of voices, especially for the Chinese characters.

As many have said the narration isn't the best but not bad enough not to listen. The narrator didn't handle dialog well; ok he sucked at dialog sections, but luckily there isn't much back and forth dialog. While this isn't the strongest book it is a good start and I can see potential. I have listened to the second in the series and the author has tightened up his writing and there is a different narrator. While you don't need to listen to this book before the second book, I do recommend it.

This is my first book by Mark Henshaw. This book starts out as a spy story in Venezuela when CIA agent Kyra Stryker escapes a trap but is wounded. On her return to Washington D.C. she is assigned to the Red Cell an out of the box analyst group headed by Jonathan Burke. They are busy with a problem in Taiwan and China trying to discover what secret weapon the Chinese have developed. They discover the Assassin's Mace and while trying to find out what it is they have to meet and bring out one of the CIA asset in China called Pioneer. The first half of the book is spies and suspense the second half of the book is naval ship and air action. Lots of excitment and a fast pace story. Rob Patterson does a great job with the narration. Henshaw does a great job in tying up the story at the end of the book, so many authors leave us readers hanging.

Feel bad for the narrator of this one... he is clearly in the wrong business. It's a tribute to the quality of the story that it compelled me to endure the reader's tonally flat (except for a couple of oddly incongruous moments) and choppy delivery. Why would... anyone ... think... that ... it makes .... sense to... read... sentences... like ... this?
Given how good the sequel is, I think it would be worth exploring a new audio production of Red Cell. Haven't read the third book yet, but this shows signs of being a strong series.(Book 2 has a different narrator.)

Red Cell is Mark Henshaw's first novel and it's excellent. The story bounces around a bit at the beginning, not in a distracting way, but in a way that compels you to stay engaged and pay attention. I liistened to the book in my car during the 30' drives to and from work. There were times duing the second half of the book that I took the long route just to be able to listen longer! The characters have lots of depth and the story is wonderfully detailed. The narration by Rob Patterson was well done and complemented the excellent story. I'm definitely a Henshaw fan and will look forward to upcoming novels.