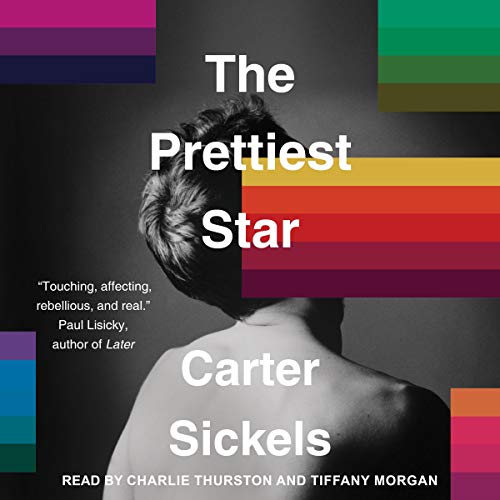 By: Carter Sickels
Narrated by: Tiffany Morgan,Charlie Thurston
Try for £0.00

Small-town Appalachia doesn't have a lot going for it, but it's where Brian is from, where his family is, and where he's chosen to return to die.

At 18, Brian, like so many other promising young gay men, arrived in New York City without much more than a love for the freedom and release from his past that it promised. But within six short years, AIDS would claim his lover, his friends, and his future. With nothing left in New York but memories of death, Brian decides to write his mother a letter asking to come back to the place, and family, he was once so desperate to escape.

Set in 1986, a year after Rock Hudson's death shifted the public consciousness of the epidemic and brought the news of AIDS into living rooms and kitchens across America, The Prettiest Star is part Dog Years by Mark Doty and part Tell the Wolves I'm Home by Carol Rifka Brunt. But it is also an urgent story now: It a novel about the politics and fragility of the body; it is a novel about sex and shame. And it is a novel that speaks to the question of what home and family means when we try to forge a life for ourselves in a world that can be harsh and unpredictable.

What listeners say about The Prettiest Star

If you only ever listen to one book about AIDS make sure it’s this one
Listening to the different points of view gave this book a depth that you don’t often find
It’s beautifully narrated and keeps you coming back for more
The very real emotions around gay people and AIDS in the 1980’s are front and foremost in this book making it a must read
.

The performance has spots where the location or time or the story changes from one sentence to the next without pause or warning; not terrible, but it is distracting. The story itself is a hard one, so much bigotry and pain and ignorance during the AIDS crisis in the mid-80s and it's all here. There are few heroes in this book and lots of moments where hindsight grants the reader the opportunity to be judgmental. As the blurbs say, it's the story of one young man and his family and the small town he goes back to to die, but I think it's also important to remember the response of Ronald Reagan and his supporters: ignore the crisis, deny it's a crisis, blame the victims, invoke god's punishment, people die.

This is a book that will open hearts and raise consciousness. A beautiful meditation on the meaning of home, the tension between sorrow and rage, and what it means to be queer at a time when having a virus made you less than human. This book asks us to "Don't forget. Say their names."

The narrators do justice to the story as well. Highly recommend!

Pretty accurate description of what happened to many a gay man who left families in small towns to live in NYC and then contracted HIV and AIDS. Going home meant confronting all the homophobia of small town America, especially for a disease that was feared and reviled. A bit "cookie cutter" in its characters and a bit long for what is served up, but a good reminder of a history not that long ago.

A heart wrenching tale about a young gay man in the 80's told from 3 different perspectives. He leaves his small town home for New York so he can finally live his true life. While living his truth, he finds love, friendships, and death. He loses his soul mate to AIDS and is diagnosed with the disease himself. He decides to move back to his hometown to face the reality of what is ahead. You will hear the story of an unwelcoming small town and the struggles of this young gay man as he lives out his final days.

Four stars! Be prepared to be sad, angry, simply broken-hearted. A great book!

I loved this story. I loved the writing. I didn't love the performance. The same woman voiced the mother and the daughter which was hard to follow. The voices were not distinct enough so I had to keep looking at who was speaking, which fortunately it displays since the chapters are divided.

I was completely absorbed and could not stop listening. I'm certain that this book is going to win prizes.