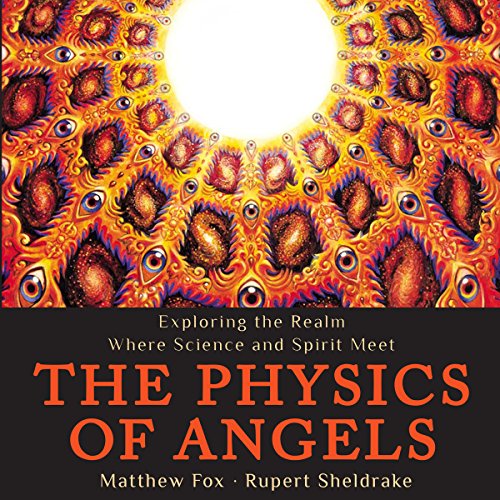 The Physics of Angels

What are angels? Many people believe in angels, but few can define these enigmatic spirits. Now visionary theologian Matthew Fox and acclaimed biologist Rupert Sheldrake - pioneers in modern religious thinking and scientific theory - launch a groundbreaking exploration into the ancient concept of the angel and restore dignity, meaning, and joy to the time-honored belief in these heavenly beings.

Angels constitute one of the most fundamental themes in human spiritual and religious experience. All cultures acknowledge the existence of spirits at levels beyond the human. In the West, we call them angels, but they go under different names in other traditions.

We are entering a new phase of both science and theology. Fox and Sheldrake explore many significant questions raised by both traditions about the existence and role of consciousness beyond the human level.

This dialog between Fox and Sheldrake concentrates on three giants of the Western tradition whose treatment of angels is particularly broad, deep, and influential. They are Dionysius the Areopagite, a Syrian monk whose classic work, The Celestial Hierarchies, was written in the sixth century; Hildegard of Bingen, a German abbess of the 12th century; and St. Thomas Aquinas, a philosopher-theologian of the 13th century.

Fox and Sheldrake have selected their most important and relevant passages about angels, and each is followed by a discussion exploring their meaning from both a theological and a scientific perspective.

What listeners say about The Physics of Angels

Loved how they presented this book, very well considered. Clever interpretation of physics, which creates a believable argument. A must read for anyone who has read The Field by linda mctaggart and anyone interested in the idea of god and angels.

The guy reading this thinks he can do a good English accent, but he cannot. He sounds like a drunk Patrick Stewart who hasn't learned some fairly basic vocabulary, and is winging it. Also, he needs to be able to pronounce the old names for things, which he hasn't bothered to do. This distracts from the otherwise marvellous and intriguing content, which I can't fault at all.

Rupert Sheldrake is phenomenally knowledgeable and raises questions from both a scientific and spiritual view point
The content is easy to follow regardless of knowledge on biology, quantum physics, mystics and traditions

After being impressed by Sheldrake's measured, well-thought-out book 'The Science Delusion' I thought I'd give this a go. What a mistake. Pseudo-religious claptrap batted back and forth, most of it making no sense whatsoever, all couched in a framework of unconditional belief in the unutterably absurd. This book has no redeeming aspects whatsoever, it is appalling.

Recommended reading for the exploration of a new cosmology where science and spirituality take a grounded and practical expression on human behavior and vision nature.

I am a big fan of Rupert Sheldrake, just wish the excerpts from historical sources were not so long.

Certainly kept my attention, though the title is a bit misleading

This book is a general discussion of angels from the perspective of Fox and Sheldrake, both fascinating figures considered heretics in their fields. They draw mainly on the works of Dionysius the aeriopogite, Thomas Aquinas and Hildegard of Bingen. Some anecdotes about the traditions of native America s, Hindus, Buddhists and other traditions are thrown in. Science is discussed in general anecdotal terms, either when it is relevant to the general discussion, or when there are symbolic parallels between it and medieval ideas about angels. I did not find it especially convincing from a scientific point of view, but I did find it to be a fascinating discussion of theology and learned a bit of science along the way. Overall, it’s worth listening to, but I wouldn’t expect anything mindblowing as far as the science goes. Belief in angels is still very much a matter of personal experience and/or faith.

I don't fully have the words to describe how deeply moved I am by this coming together of Dr. Rupert Sheldrake and Rev. Dr. Matthew Fox. Angels have been an extraordinary part of my life since birth, and I'm certain that my grandmother and her mother (Italian Third Order Franciscans) helped open that door for me. To give these lovely beings the credit and the dignity and clarity that they deserve is such a precious gift and I will be always grateful for the insights gained here. THANK YOU!!!