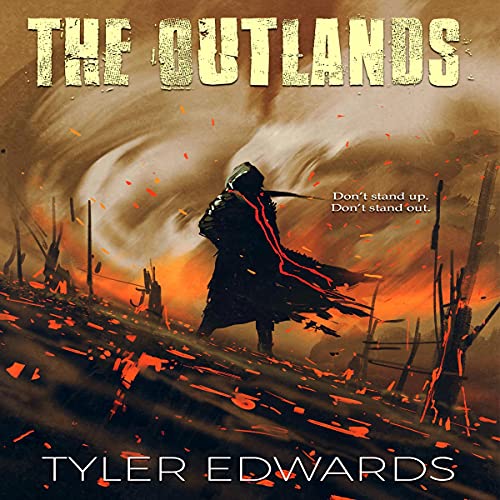 By: Tyler Edwards
Narrated by: Robert Grindley
Try for £0.00

In the ruins of the world that was, lies the city of Dios, a haven protected from the hostile environment known as The Outlands. Ruled by an oppressive patriarch, the people of Dios are conditioned in fear. The smallest infraction could result in banishment to the Outlands, a fate worse than death.

With his makeshift family of “Undesirables”, Jett Lasting struggles to find his place in a world where drawing attention to yourself can get you killed. His very existence is considered a crime. To survive, he must avoid guards, beggar gangs, and an ever-growing tension that could drag the whole city into chaos.

Jett unwittingly becomes entwined in a plot to overthrow the government where his choices could lead to freedom or the death of everyone he’s ever known or cared about.

What listeners say about The Outlands

The Outlands, written by Tyler Edwards, is a decent dystopian/post-apocalyptic story set in the future where humans now live in giant walled cities under a protective dome to keep out the toxins and the other nasties outside their walls. Only a handful exist, like the megacities idea in Judge Dredd, and each apparently specialising in something (kind of like Hunger Games), although we spend all of the book inside Dios.

Jett Lasting doesn't fit into the structured, class-based society. He's an undesirable, the lowest of the classes. No good for anything except stealing and taking up space. He runs with a makeshift family, avoiding beggar gangs and the tyrannical Patriarch, just trying to stay alive.

Eventually, of course, this life gets to him, and slowly the seeds of rebellion are sewn, kicking off some fast-paced action where it's impossible to know who to trust.

I'll admit, it took me a few chapters to really get into this. It started a little slow, but I'm glad I stuck with it though because as the story went on, I began to connect with characters and care about their struggles.

Narration by Robert Grindley was... okay. Not great, but okay. I wasn't a fan of a few of the vocal choices he made for some of the characters, but others were excellent. There was a lot of extraneous noise throughout, small clicks and background noises like that, plus the narrator constantly sounded like he had a dry mouth. A glass of water and maybe some more time spent cleaning up the background noises could have improved the quality immensely.

Overall, not a bad story and one I enjoyed getting to experience. Plenty of action, along with twists and turns to keep you wondering who to trust.

This book reminds me of a couple of other series I really like (red rising and hunger games). I had a hard time setting this down and ended up finishing it in a weekend. I wasn’t expecting much from this book as this is one of the first books by this author but the reviews on goodreads sucked me in! I ended up putting this in my top 10 series list at #8. Hopefully the rest of the books end up as entertaining to me as this and it remains in my top ten.

There was a small mistake in the location for a supporting character. He was supposedly captured but the next scene he was still with the group as though he never was captured. I had to listen to it twice before I realized I didn’t miss anything it was just a mistake. I just overlooked it and moved on… it didn’t really change the outcome of the story at all.

The Outlands was written by Tyler Edwards and narrated by Robert Grindley. This young adult dystopian adventure is a suitable listen for its genre. I found it to be comparable to the more notable hallmarks of the YA genre. I.e., Hunger Games and Divergent. With great world-building and a surprise ending to make it all worth wild this is a good read. Where it fell short in my opinion was the characters. They seemed flat with cookie-cutter personalities. But with this being the first book in the series there is still time to see the characters grow and break through the troupes of their current existence.


The narration by Robert Grindley was the same as the writing. Solid but not compelling. Unfortunately, the only thing that made an impact on me was that his pronunciations of certain words were very different from any other narrator I have listened to.


Editing, quality, and production were on par with most books I have listened to. It was clear, with no issue with sound or quality.


Disclaimer: This Audiobook was provided free of charge by the author, narrator, and/or publisher in exchange for a non-bias, honest review.

Narrator Robert Grindley gave a stunning performance, utilizing his voice in all sorts of ways. He is not afraid to try new accents or voices. He will carry listeners to a futuristic dystopian world, reminding me of the Hunger Games and the Divergent series. I did hear a few uncomfortable mouth smacking and lip licking sounds, but after the first chapter, the narrator seemed like he relaxed and proved himself an excellent storyteller. I counted at least 10 different voices, which is much higher than the average. He conveys drama, tension, and angsty moments, which increased the intensity of the action and revolutionary fighting scenes.

The plot is interesting enough, so young adults and those folks not needing steamy romances will find it highly gripping. Listeners will definitely find themselves cheering for the reluctant protagonist and his lackeys which guarantees an exhilarating audiobook.

The character building and world-building were a bit vague, meaning the radius surrounding the city and the city square, and all the way to the Outlands was a bit difficult to visualize. The suppressed and oppressed outcasts suffering, wanting to fight, starting a rebellion irritated me crazy. They kept repeating their suffering, and although I heard it many times over, I did not find myself sympathizing with them. They moved extremely slowly. It felt like they got nowhere. Lots of speculation and planning, lots of guessing.

But a surprise character, appearing two hours before the ending had me sitting up. “WTF? What is going on here”, I asked myself. Hmmm, a mysterious, sexy 40 something man, being introduced,,, "down with the Patriarch!" I cheered!!!

Yes, I recommend this audiobook.

What I've been looking for.

First off I finished this book in one day, it was too good not to. It's not a dystopia book that is pure doom and gloom but is also not butterflies and rainbows. It's well written and just a overall fun experience to listen too.