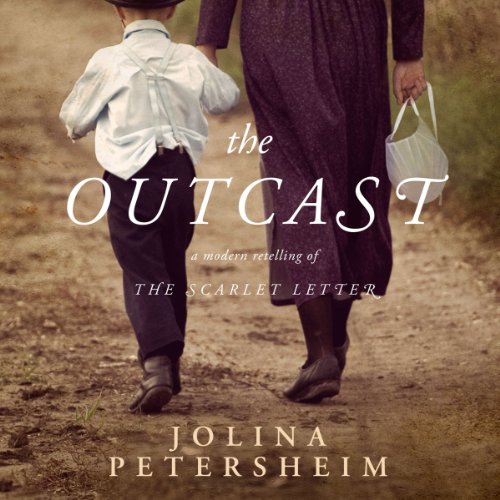 Rachel Stoltzfus never imagined she’d be the talk of her Old Order Mennonite community until whispers stir the moment her belly swells with new life. Unmarried and refusing to repent by naming the partner in her sin, Rachel feels the wrath of the religious sect as she is shunned by those she loves most and eventually forced to leave - driven out by her twin sister’s husband, the bishop.

But secrets run deep in this cloistered community, and the bishop is hiding some of his own, threatening his conscience and his very soul. When the life of Rachel’s baby is at stake, choices must be made that will bring the darkness to light, forever changing the lives of those who call Copper Creek home.

"A must-read that will draw you into a secretive world of sin and senselessness and leave you with the hope of one set free." (Julie Cantrell, New York Times best-selling author of Into the Free.)

Difficult to get use to the narration...

The book is written from the point of view of two of the main characters. It is written in the first person in alternating chapters. To distinguish between the two voices one of them is read in a strong germanic accent which I found difficult to listen to. It took some effort to keep up with what was being said in this voice & I found it grated on me a little. I persevered with the book because I found the story interesting.

If the friend is interested in a family story with a religious background and a more or less predictable ending, yes.

It was more of a surprise than expected, though still mostly predictable. However, not unrealistic, considering the setting. Kind of happy with the ending, just a little disappointed but.... for the genre it is fitting.

Cannot tell without spoiling too much, as it is in the second half. In general I liked the way the two sisters developed throughout the booking, despite both recently having become mothers for the first time, they still had a lot of growing up to do. There are some scenes which show this growing up in an admirable and credible way.

No, not that spell-binding.

An interesting portrayal of the fate of two twin sisters who grew up in and Old Order Mennonite community. Given the religious background, it is an interesting story, sometimes too predictable. For my current taste in the middle part too shallow and I would have liked more information about growing up and living in such a community.

Brilliantly read by Tavia Gilbert, who made the two narrators come to live, both in English and Pennsylvania Dutch.

full story not the norm for amish fiction

Would you consider the audio edition of The Outcast to be better than the print version?

I enjoy the audio much more than the print as it adds extra depth to the story.

The narrator did an excellent job reading and voicing the characters. My favorite character she voiced was Ida Mae.

This was easy to listen and follow. The narrator did an excellent job with the Amish accents.

I'm looking forward to hearing many more books narrated by this artist.

Would you consider the audio edition of The Outcast to be better than the print version?

Yes. Tavia Gilbert does an amazing job narrating. She added to the experience.

Which character – as performed by Tavia Gilbert – was your favorite?

I cried. The story and the narration were a perfect combination to bring out emotions.

I went searching for more books by Petersheim and more books narrated by Gilbert.

If you could sum up The Outcast in three words, what would they be?

What other book might you compare The Outcast to and why?

When Amos talks to his son and helps him to see that he is also to blame for what happened with Rachel.

Yes couldn't stop listening until it was finished.

Oh my - what a wonderful book! The characters become friends - the twists and turns are unexpected - the story of hope and forgiveness ! Love this author !
The narrator was unbelievable - the different characters were all unique ! Just loved it !
Can’t wait to read another book by Jolina

A little weird with the storytellers. Amos is one person telling the story, and he's....dead. Which was, a bit different. And he's got some very strange accent that sounds like he's from Tasmania or an unidentifiable country.

Rachel is the other story teller, who is delightful to listen to. Tavia Gilbert is an excellent narrator, so I give her 5 big stars for her performance. I guess the story being told by the dead man wasn't my cup of tea. Overall, it's a good book, and I highly recommend this author.... I read her book "The Midwife" and was blown away. So, you've got a great author, great reader, could be a little more believable, but, that's fiction :)

A good story with a weak & predictable ending. Too much of a happy ever after.

Would you try another book from Jolina Petersheim and/or Tavia Gilbert?

This book is based on a relatively interesting storyline (ie. Amish scarlet letter); however, it is likely much more enjoyable read rather than listened to. The narrator has an odd cadence to her voice which made the narration sound choppy and unpleasant in my opinion. The chapters where she takes on the male character's voice as narrator and uses a Pennsylvania Dutch accent are actually much more pleasant audibly. At any rate, you get used to it, but it certainly tempered my overall opinion of the audio version. The story itself I found to be entertaining and well written. It fell short of true literary grit as an "Amish Scarlet Letter", was rather predictable in many ways, but it makes for a worthwhile read.