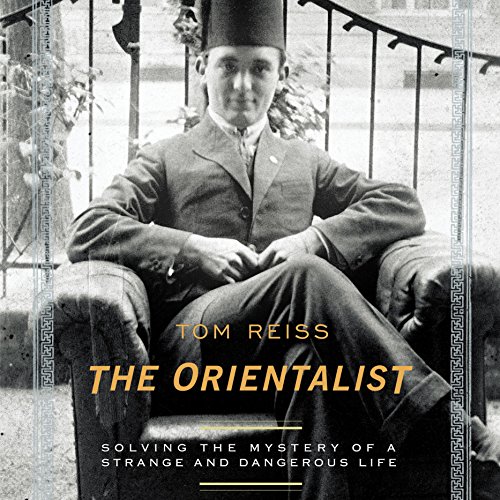 Solving the Mystery of a Strange and Dangerous Life
By: Tom Reiss
Narrated by: Paul Michael
Length: 15 hrs and 57 mins
Categories: Biographies & Memoirs, Artists, Writers & Musicians
4.5 out of 5 stars 4.5 (6 ratings)

Part history, part cultural biography, and part literary mystery, The Orientalist traces the life of Lev Nussimbaum, a Jew who transformed himself into a Muslim prince and became a best-selling author in Nazi Germany.

Born in 1905 to a wealthy family in the oil-boom city of Baku at the edge of the czarist empire, Lev escaped the Russian Revolution in a camel caravan. He found refuge in Germany, where, writing under the names Essad Bey and Kurban Said, his remarkable books about Islam, desert adventures, and global revolution became celebrated across fascist Europe. His enduring masterpiece, Ali and Nino - a story of love across ethnic and religious boundaries, published on the eve of the Holocaust - is still in print today.

But Lev's life grew wilder than his wildest stories. He married an international heiress who had no idea of his true identity - until she divorced him in a tabloid scandal. His closest friend in New York, George Sylvester Viereck - also a friend of both Freud's and Einstein's - was arrested as the leading Nazi agent in the United States. Lev was invited to be Mussolini's official biographer - until the Fascists discovered his true identity. Under house arrest in the Amalfi cliff town of Positano, Lev wrote his last book - discovered in a half a dozen notebooks never before read by anyone - helped by a mysterious half-German salon hostess, an Algerian weapons smuggler, and the poet Ezra Pound.

Tom Reiss spent five years tracking down secret police records, love letters, diaries, and the deathbed notebooks. Beginning with a yearlong investigation for The New Yorker, he pursued Lev's story across 10 countries and found himself caught up in encounters as dramatic and surreal, and sometimes as heartbreaking, as his subject's life. Reiss' quest for the truth buffets him from one weird character to the next: from the last heir of the Ottoman throne to a rock opera-composing baroness in an Austrian castle to an aging starlet in a Hollywood bungalow full of cats and turtles.

As he tracks down the pieces of Lev Nussimbaum's deliberately obscured life, Reiss discovers a series of shadowy worlds - of European pan-Islamists, nihilist assassins, anti-Nazi book smugglers, Baku oil barons, Jewish Orientalists - that have also been forgotten. The result is a thoroughly unexpected depiction of the 20th century - of the origins of our ideas about race and religious self-definition, and of the roots of modern fanaticism and terrorism. Written with grace and infused with wonder, The Orientalist is an astonishing book.

"A wondrous tale, beautifully told, that took the author five years and patient detective work in 10 countries to reconstruct...Mr. Reiss's quest takes him right through the looking glass [and] what a tale it is - mesmerizing, poignant and almost incredible. Mr. Reiss, caught up in the spell of Essad Bey, has turned around and worked some magic of his own." ( The New York Times)
"Thrilling, novelistic, and rich with the personal and political madness of early-20th-century Europe." ( Entertainment Weekly)
"Mr. Reiss's book fills the reader with admiration. Tracking a life across so many cultures and disguises, far-flung places and languages, he must have endured an odyssey comparable to his subject's.... The modern world had given up on [Lev Nussimbaum]. It had, as Mr. Reiss says, 'left him without an audience.' He has one now." ( The Wall Street Journal)

An amazing and gripping story

A documentary that feels like a novel with a very interesting inserts of history, that puts many historical facts on the right place and helps to understand what happened to the world and why.

On a personal level, this book made me look at my Jewish identity in a completely new way. I plan to listen to this one again.