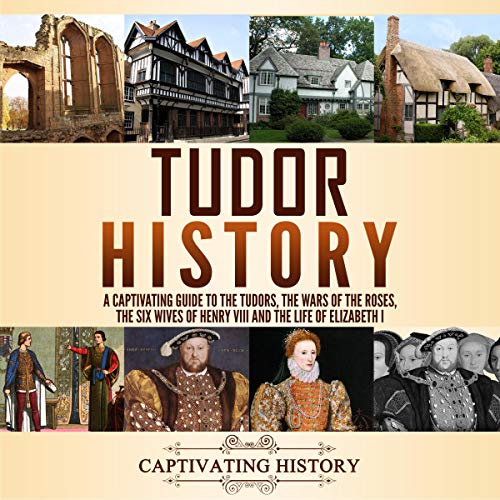 If you want to discover the captivating history of the Tudors, then pay attention....

Four captivating manuscripts in one audiobook:

Five Tudor monarchs sat on the throne of England and Ireland from 1485 to 1603. The family earned their royal rights through strategic planning and battlefield prowess, and kept them because of intellect, strength, and sheer determination. The Tudors, one of England’s most powerful and famous royal dynasties, knitted together a fragmented and small island nation that became one of the world’s financial, colonial, and technological superpowers.

There is so much more to the story of these kings and queens than beheadings, political marriages, and the reformation of the church - but those events remain some of the family’s most enthralling moments.

What listeners say about Tudor History

Don’t get this book

I’m a fan of the Tudor period but this book just jumps all over the place and hasn’t got any depth at all, if you know your history it will drive you mad.
Then the narrator,I don’t usually take much notice of narrator reviews as we all have our preferences however, he talks so fast I had to slow the speed down but he’s still going a mile a minute. Also you can allow some pronunciation differences , doesn’t usually bother me, but he couldn’t get basic words right over abs over. In one sentence he even named the wrong queen.
I would definitely recommend giving this a miss

Very interesting but please learn how to pronounce English places

Found the information very interesting although some parts were a bit repetitive but the inability of the narrator to pronounce many of the English place names is sloppy and just wrong. I hoped for more from this audiobook but I persevered and learned a lot from it

A bit dry for my flavors, but stimulating all the same. Recommended for Tudor devotees, maybe those taking a history class would benefit from reading this book.

Not sure, still a good work

I still appreciate that a lot of time went into creating this audiobook but I am not sure of the use for it.

I am in love with Captivating History's books. Books from these writers always described the topic well enough.

A wonderful audible by Captivating History.

Julie Leal I completely endorse your comments on this fabulous book. Indeed great book and I learned a lot, even at my age and given I am Scottish by birth. Recommended read for historical fact.

I am not agree with Carmen Suggs (A reviewer, he said this is an average book). In my opinion this is an easy to listen audible, especially for the task of understanding English realm for the Americans. I methodically enjoyed it. I would recommend it.

The authority on Tudor history!

After listening to this, I revealed that events surrounding Guy Fawkes on the 1605 had their origins in Elizabeth's reign. If you want to know more behind this story, and others.

Tudor life from royalty to commoner.

The contents of the book are comprehensive, nothing happened in isolation. I especially like the long descriptions presented by the author.

Tudor story and the culture.

A brilliantly structured history of the Tudors. I received this book some days back and started listening to that immediately. The descriptions are great and attractive for history lovers.

Not very informative, seudo history. Do not spend your money on this book. Get something else instead.

I won't be able to listen to this mechanical chipmunk for 510 minutes, let alone 10 hours.

Easy to read and pleasurable, very well documented and tempting to know further about the history of England and Scotland. The style of writing was fluid and made for enjoyable reading.

Quit a good med for the Tudor dynasty lovers however, the author offered too many opinions rather than keep himself on a single track. I was hoping a thoroughly historic account.