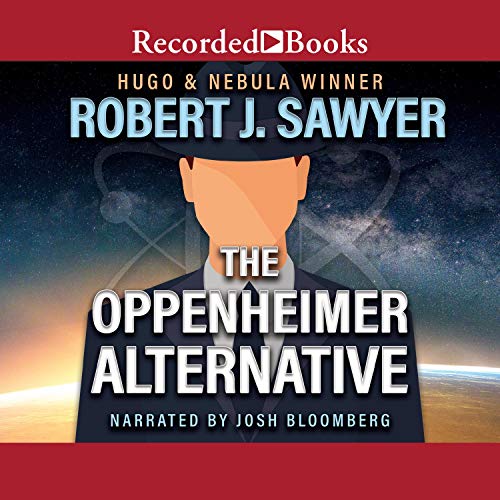 By: Robert J. Sawyer
Narrated by: Josh Bloomberg
Try for £0.00

Writing with “a sense of wonder that hasn’t prevailed since the days of Heinlein” (Books in Canada), best novel Hugo and Nebula Award winner Robert J. Sawyer brings you “a truly science-fictional work of alternate history” (S.M. Stirling).

While J. Robert Oppenheimer and his Manhattan Project team struggle to develop the A-bomb, Edward Teller wants something even more devastating: a weapon based on nuclear fusion - the mechanism that powers the sun. But Teller’s research leads to a terrifying discovery: by the year 2030, the sun will eject its outermost layer, destroying the entire inner solar system - including Earth.

Meticulously researched and replete with real-life characters and events, The Oppenheimer Alternative is a breathtaking adventure through both real and alternate history.

What listeners say about The Oppenheimer Alternative

Not up to snuff

Miles off the quality of earlier books, such as The Terminal Experiment. Do not recommend.

I have read all of Sawyer's novels and really loved them.
I didn't think this was up to those previous novels. It seemed mostly a biography of Oppenheimer with no real science fiction or alternative world he lived in. The only glimpse of Sci Fi was in the last 20 (or so) minutes of the novel. I guess I expected more fantasy and depth. It was well written but I kept waiting to see where this would take my imagination. It didn't get going until the last chapter. I guess I expected more from Mr. Sawyer.

It enjoyed the performance, the history but overall I was disappointed in the novel.

History Up Close and Personal--with a Twist

Robert J. Sawyer has delivered again with The Oppenheimer Alternative. The first section of the novel is a closeup view of the development of the atomic bomb, including the marvelous idiosyncrasies of famous scientists such as Fermi, Szilard, Teller, Feinman, Einstein, and more--plus key non-scientists like General Groves.

The second part of the book explores what might have happened after Hiroshima and Nagasaki, where a mystery drives Oppenheimer and his colleagues to SAVE the world, much as the Manhattan Project permanently CHANGED the world.

So far, a major disappointment

Haven’t finished yet, but so far I’m pretty disappointed. The story is uninteresting and slow to get going. I’ll stick with it, because its Robert Sawyer, and I’ve never had a book of his I don’t like, but thinking this might be the first...

**edit** So I just finished it, and while the end is better than the beginning, it just doesn’t have the interest I’ve come to associate with Robert Sawyer. There was potential here, but I don’t feel it was realized. The science fiction got lost in the history, it was almost like the author spent lots of time researching the history and wanted to squish everything he found out, relevant to his story or not, in to the plot. Would have been better if he’d taken the idea, and written his own history to go along with it.

Robert J Sawyer's The Oppenheimer Alternative is an alternate history tale that is mostly historically accurate, but with a twist. All the major significant physicists of the mid 20th, especially those directly involved with the Manhattan project to develop the atom bomb are here. Most of the historical events are portrayed true. Added to the mix is the added feature of those same top secrets scientists discovering that the sun has undergone an event that will propagate out and destroy the Earth around 2028 and they plot in super secret to save humanity.

Sawyer stays largely true to the actual historical events including some of the painful and embarrassing personal and professional behind the scenes activities during one of the most secret, but also public periods for physics. While the eventual resolution is a bit rushed at the end, the solution is ambitious, but still based in science fiction physics.

The narration is well done with very good character distinction. Pacing is reasonable. Keep Google handy throughout as confirmation for some of the detailed historical events will be needed as the truth sometimes strains credulity.

Sawyer does it again! A totally original journey through the history of the dawn of the nuclear age. Sawyer and Bloomberg bring the giants of the day ( Einstein, Grove, Teller, Oppie! ) to life in this sprawling, unique and fun listen.

Revisionist history, with a hard sci-fi bend to it. For some reason, this offering really resonated with me. Hearing Bloomberg give voice to long passed historical characters was grand fun, and educational as well.

Highly recommended for a variety of listeners, including history buffs. Spend the credit and enjoy it!

History with a twist!

The Oppenheimer Alternative by Robert J. Sawyer is an alternate history novel that follows the group of the world's greatest physicists that developed the nuclear fission bomb during WWII. But in this timeline, this group of intellectuals discover an impending doom for mankind even greater than the Axis powers, and after their creation ends WWII with nuclear fire in Japan, they set about trying to solve this new problem for humanity's sake.

All the characters in this novel are real historical individuals, and their separate personalities, personal drives, and clashing egos make an excellent back drop for a great scifi story. This novel surprised me with its ending, but it did end the best way possible after a bit of reflection. A solid novel, and historically accurate depictions and descriptions of people and history until the story takes its turn make for both a history lesson and a great alternative history scifi read. A solid 3 1/2 to 4 star read from Robert J Sawyer, who is quickly becoming one of my favorite authors.

This novel was published in 2020 but reads like Classic sci-fi from the 50s. Perhaps it's because the story begins in 1936 and ends in 1967. Told completely chronologically, the first 4 hours of the tale takes us from Robert Oppenheimer's life as a college professor, through his involvement with the Manhattan Project, Hitler's death in 1945, and the dropping of The Bomb on Japan. It reads like a well-written biography of all the key players in the race for the A-bomb.

Then it takes a turn into alternative history. Edward Teller wants something more devastating: a weapon based on nuclear fusion - the mechanism that powers the sun. But Teller's research leads to a terrifying discovery: by 2030, the sun will eject its outermost layer, destroying the entire inner solar system, including Earth.

Interesting concept for a new book, and I enjoyed it, but not as much as previous Sawyer novels - I think because of the older time period. But if you love classic sci-fi, this is a modern "classic" you shouldn't miss.

I met Rob at a SF writer's conference in LA some years back and he's a great guy. I've enjoyed all of his novels, but my favorite - still - is Calculating God. Look it up, it's a 5-star read!

love sawyer. disappointed in this

I highly recommend this book for anyone one enjoys the history of science. Great story! Great narration!

I really enjoyed several other books by this author, but the only part of the story that really caught my attention was the last 3-4 chapters.

The performance was good.