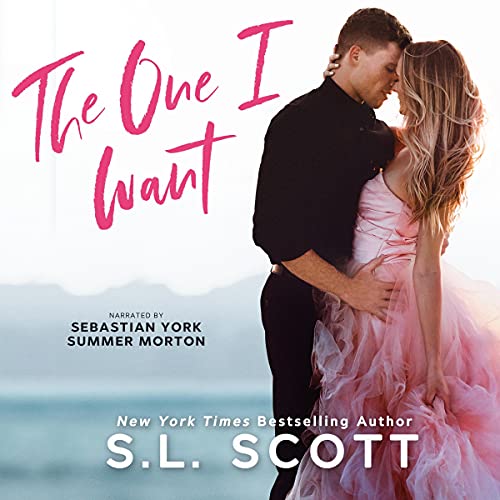 The One I Want

By: S.L. Scott
Narrated by: Sebastian York,Summer Morton
Try for £0.00

It’s not the first time I’ve been called a stalker. I can’t blame Andrew Christiansen for thinking I am, since we keep crossing paths, especially when I pop up in the most unexpected of places - his office.

We’re opposites in every way. Not the kind that attract. I’ve been called a ray of sunshine. He’s been called a grumpy workaholic that needs an attitude adjustment. By me. Somehow, we become friends - the teasing, flirting, and kissing kind. But this thing blooming between us threatens to turn this relationship from friends-to-lovers into a full-blown office romance. That’s the least of my worries because one or two little - okay, big - secrets I’ve been keeping may turn him from the one I want into the one I can’t have.

What listeners say about The One I Want

I loved this book. The two main characters are very likable and I actually want a Drew/Andrew of my own please with Sebastian York's voice of course. swooooon..
The first half of the story is full of humour, it gets a bit more serious in the second half but still very enjoyable. Both narrators did a great job in bringing the characters to life. This was a very easy listen thanks everyone.

This is a lovely story. Summer Morton is great but I love Sebastian York’s voice. He is great in this book. Fab fab story.

Love these narrators and the story is perfectly sweet (with heat). Andrew is so swoony and lovable. Juni is the perfect balance and brings so much fun to the story!

I am amazed how the author can write such a meaningful story of two people, who are so different but together perfect. This story will take you on a journey of emotions and the narration brings it to life.

Andrew Christiansen is the CEO of Christiansen Wealth Management, a billion dollar company with offices in New York, Los Angeles and Seattle. Although home is Los Angeles, he is in the New York office, with its growth potential, to expand the business and prove to his father that he is worthy of his title. He's married to his work and, to his mother's chagrin, doesn't care one iota about a personal life. Cookie Christiansen wants nothing more than to see her sons happy and healthy. Before leaving Los Angeles, she made Andrew pinky swear that he would follow all the tasks on the list she gave him.  After two weeks of stalling, he reads #1: "Lie in the grass in the nearest park at 9:17 on a sunny weekday." That leads him to meet a smelly dog, who got free, and the stunning woman who used to be attached to the leash! Juniper Jacobs is a botanist like her parents, but works for a temp agency and takes the jobs they offer her. She has a sad backstory of an early life without her parents, world-renowned botanists, who continually traveled for research. They were killed in an airplane crash and Juni went to live with her grandmother. She made friends with the other residents, especially Gil, the doorman/father figure/friend. She's surprised to see that Andrew lives in her building, but she doesn't say anything to him because he's already teased her that she must be a stalker, since they seem to run into each other practically every day. When personal and professional paths cross, their friendship becomes so much more. This compelling story is a reminder that love isn't just a physical attraction, but the knitting together of the heartstrings. And about that list. Is it a happy accident or New Age fate (with a helping hand by Cookie Christiansen) that brought them together? Whatever it was, their stars aligned perfectly.
The narration is beautifully done by Sebastian York and Summer Morton. Their voices blend well, giving each character a unique and dynamic personality.

I really wanted to like this book but there was essentially no story line. The narrators were good but the book was so boring I couldn’t finish it.

This book hit the spot. It is an enjoyable romance with humor mixed in but not too much angst or drama. It is a perfect summer read/listen to enjoy on the beach or by the pool.

Hold on to your heart! Fabulous book!

S.L Scott you never cease to amaze me, no one
can write a love story like you. Sebastian York,
you can draw us into the story and
make us believe we are there.
Junie was carefree with a loving giving heart.
Andrew works 24/7. His Mom Cookie
gives him steps to help his love
life. Summer Morton, great job narrating.