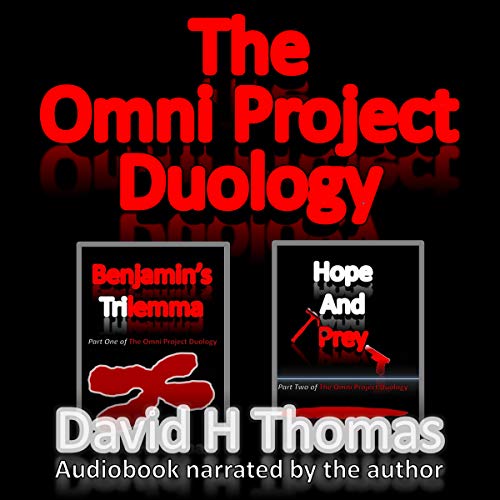 Felix Benjamin is the father in his dysfunctional family. His daughter, journalist Samantha, returns home after working abroad, and then promptly disappears without a trace.

Kaseph is a scientist-entrepreneur who has discovered a way of turning science fiction into science fact. With a revolutionary stolen computer programme, he sets out to test it across Europe using a series of unsuspecting human guinea pigs.

Felix, Samantha, and Kaseph. Each yield up deeply personal accounts which combine to tell their gripping story.

What is the nature of Kaseph’s scientific breakthrough? Why is he so secretive? What’s the one factor his trial subjects all have in common?

Felix Benjamin is still wrestling with the three impossible situations he encountered in Benjamin's Trilemma: three horrific decisions he prayed he would never have to make. Breaking his silence will mean Felix and his family will become targets for Omni's Joseph Kaseph and his enforcer, Christian Hope.

Scientist-entrepreneur Kaseph and his mysterious financial backers have become embroiled in a battle for the ultimate prize: the Omni project itself.

As alluring as she is deadly, Monika Kazlauske is the assassin hired by the backers to infiltrate the Omni organization, and then to kill Kaseph and Hope, together with its other employees. A deadly game of cat and mouse begins, set against a backdrop of three continents. On one hand, backers are being brutally assassinated, while Kaseph's team are being hunted down, tortured, and mutilated.

How do tragic personal events affect Hope's gruesome mission on behalf of Kaseph, his boss?

Who is the mastermind behind the cold blooded assassinations of the backers?

What devastating final secret will Felix uncover about another member of the Benjamin family?

What listeners say about The Omni Project Duology