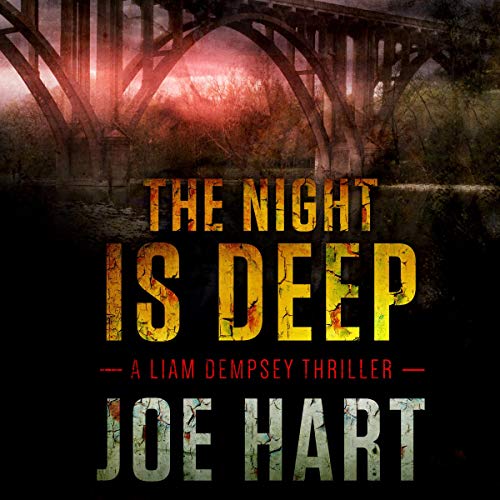 The Night Is Deep

Though he's still tormented by his brother's murder and the accident that ended his career, ex-homicide detective Liam Dempsey is trying to move on. His girlfriend and their adopted son are the best things that ever happened to him - and being a police liaison is the next best thing to being back on the force. But when an old friend asks for his help, Liam is thrust into a harrowing investigation that reawakens his darkest personal demons.

A politician has been violently attacked, and his wife is kidnapped for ransom. But as police mobilize to track the victim and trap her abductor, the case takes a chilling turn from extortion to grisly murder. Whoever snatched Valerie Farrow wants blood and money - and they're brutally collecting.

Working with, and against, the police, Liam is forced to dig deep to expose the ugly truth - even if it means digging his own grave in the process.

What listeners say about The Night Is Deep

Dempsey is a treasure

Hart brings us the second I what I hope is a long series although this book does tie it up quite nicely. I'd hate to think this is the end though. Best to read the first in the series for continuity
GREAT!

This second book about Liam Dempsey was a little more brutal than the other one. I mean, the other one had Liam’s brother being cut into pieces but this one was just so cruel and bloody in the killing. LOL, I have to wonder about authors’ minds when I read this kind of story. Not that it’ll stop me from reading them.

This was about a young woman who was killed 16 years before but the killer just kept looking into it until the killer found out for sure that it had been murder and not suicide, as the coroner called it and now the kidnapping of her sister. Then the killer killed the 4 men responsible. Two of the killings were killed in a really disgusting ways. And two different killings were totally unnecessary as they had nothing to do with the girl dying 16 years ago. There were twists and turns in this and I was surprised at who the killer turned out to be.

I did like Liam but he wasn’t much of a hero. He was always losing his gun or getting the hell beat out of him (or run over by his own truck) BUT he had a way of solving the puzzles that no one else did, so there was that.

There was only fade-to-black sex and the F-Bomb was used 41 times.

As to the narration: Eric G. Dove was his usual awesome self. Men, women and emotions were nearly perfect.

the night is deep

this author is new to me...really enjoyed this and look forward to more. interesting characters .... well paced and a great ending!

Book 2 is an all around win

Things are going well for ex-homicide detective Liam Dempsey at the start of book 2. Though he still suffers over the death of his brother, he's been busy as an official police liaison, and building a life with Dani and Eric. He's adopted Eric, and they're living a relatively peaceful life in a farmhouse just outside of Minneapolis.

Working the occasional cold case, Liam is brought in on what initially starts out as a kidnapping case of the wife of an old friend of his. But through many plot twists and turns, Liam discovers that there's more going on - a lot more. I was satisfied with both the climax and the resolution, and I was left wanting more of Liam, Dani, and Eric.

Joe's writing is descriptive, but not wordy. He only spends the amount of time needed to bring you into a location or situation, but doesn't over-analyze things. As a character, Liam often gets in his own way (more than once I wanted to cuff him), but his imperfections is one of the things that make him such a likable, and sometimes frustrating, character.

As in book 1, there's a hint at the end of what's coming in book 3, and Joe can't write it fast enough for me.

The River is deep

This was a really good detective story. You will find lots of action and mystery in it's pagez.

But the grisly murder was a bit too much for me. I’ve listened to 4 of Joe Hart’s novels and highly recommend.

Loved the book! All of it. The reading. The story. Hope to read more in the future.

I was given this Audible book free, with that statement made. I Enjoyed the story emmecely and will definitely read/listen to more of this authors work.