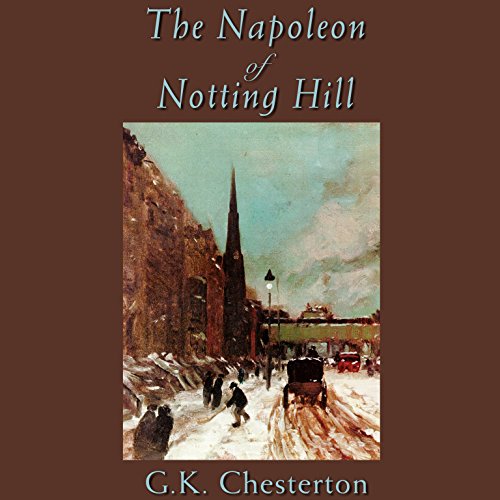 The Napoleon of Notting Hill

By: G. K. Chesterton
Narrated by: Frederick Davidson
Try for £0.00

In 1904, Great Britain was at the height of its prosperity; but G. K. Chesterton saw the drudgery of capitalism and bureaucracy eating away at the eccentricity and spontaneity of the human spirit. In The Napoleon of Notting Hill, his first novel, Chesterton creates a witty satire of staid government, set in a London of the future. Auberon Quinn, a common clerk who looks like a cross between a baby and an owl and is often seen standing on his head, is one day told that he has been randomly selected to be His Majesty the King. He decides to turn London into a medieval carnival for his own amusement - with delightful results.

What listeners say about The Napoleon of Notting Hill

The story:
The Napoleon of Notting Hill is one of my favorite books; I highly recommend it to everyone. Chesterton was friends with many authors we still know today, but is criminally under known in our era. While his fiction can stretch the bounds of story, this, his first novel, is a triumph, and deserves the sometimes-bestowed title of best first novel of a 20th century novelist.

Chesterton pokes a gentle fun at all of us, and often himself; the book begins with a humorous accounting of various ideologies he predicts will have happened 80 years hence. However, unlike his friend, HG Wells, GKC wasn't much into technology, so I generally find it better to think of The Napoleon of Notting Hill as an alternative past rather than a possible future. When the action starts, England is full of somber, efficient people, largely apathetic to governance—they even pick the king out of a hat. But what happens when the king they pick is the silliest civil servant in London, a man so bored he'll do a headstand in a frock coat on the lawn for a laugh? The King treats everything as a sort of joke, inventing ridiculous customs on a whim, but the inertia of business and government continue on.. until one day he is inspired to craft his greatest joke yet. And then the unexpected happens: someone takes it seriously. What follows is both hilarious and genuinely moving.

There was no sample preview on this ("Unfortunately, we are unable to release a sample prior to the publication release of this book"—note that the book has been released, both for Kindle and Audible, more than a year ago, and was published in 1904). That might have changed my mind about getting it as a Kindle add-on, not because the narrator isn't skillful, but because of how two major characters are voiced. Sadly starting where I'd left off reading put me right at a conversation between two characters I disliked his choices for.

The narrator has a good range of voices and accents. He reads clearly and at a good pace. His voice has a nice tone to it; overall he is good at his job. But unfortunately I find his choice of voice for the titular character vexing. It would be a perfect voice for Jacob Marley (in fact, various actors and narrators have performed that role similarly); it has a stretched, airy, perhaps reedy quality to it. But it doesn't make sense for a 19 year old boy, not in his passionate, misguided patriotism nor his nervousness (he hilariously tries to recruit shopkeepers to his cause and mostly ends up talking nonsense and buying a lot of stuff off them). I also feel he is missing the humor in both this character and Auberon the jokester king. There's a bit too much reverence-for-victoriana on those two characters; it works for Barker et al., but not for the jokester and the madman. Hopefully future listeners will be able to hear a sample and decide if they can live with Adam Wayne's distractingly odd voice in an otherwise decent if over-serious narration.

It was a fun story, full of interesting ideas and lovable characters. It got a little philosophical, but overall it is just a good story. Also the narrator was great.

Too much here to tell. Everyone should read and study what this book is trying to tell us.
What we say and do has consequences.
Wonderful message to the world.

I defy anyone to discern Chesterton's meaning and, post listen, have checked other reviews and sites to try to do so. An allegory without meaning is 7 hours of one's life lost, especially when the humour is occasionally whimsical at best.