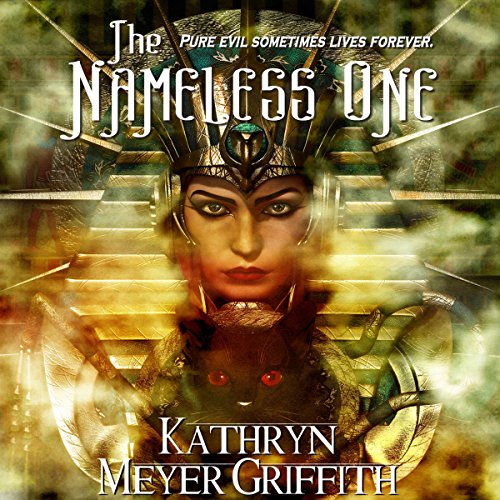 Sometimes revenge can only be achieved with magic. Laura and Julian Bennet are husband and wife Egyptologists who're looking for the ancient tomb of a lost Egyptian lesser wife... one who'd been so evil and destructive her tomb has no name, she has no name.

She was a stunningly beautiful and sensual sorceress who once had her lover, Rameses II, under her evil love spell... until the more powerful Priests of Amun captured and locked her into a magical sarcophagus for all eternity. Or so they'd thought. But when Laura and Julian find her tomb, the price it costs them is far more than they were prepared to pay. Julian's life. Then Laura, heartbroken, must delve into the most dangerous of black magics to defeat the demon called the Nameless One, gain revenge, and put the demon back where she belongs.

Two Egyptologists ,Julian and Laura Bennet,are looking for the tomb of a 'lost lesser queen'.She was evidently LOST on purpose and entombed by a magical spell to keep her there.Susan Eichhorn Young does a wonderful job narrating this through Lauras eyes.We are taken through memories,curses,death and destruction.Will anyone survive this Queens wrath?Give it a listen."I was provided this audiobook at no charge by the author, publisher and/or narrator in exchange for an unbiased review via AudiobookBlast or MalarHouse dot com"

It’s graphic in parts and this adds to the intensity. Great listen but leaves you with many questions.


*I was given this audio free of change from the author in exchange for an unbiased review.*

Felt it was the beginning to something bigger

The Bennets are Egyptologists and they are on the hunt for the tomb of a lesser known wife to a well known Pharaoh. She was a sensual magic user who was entombed and nearly erased from history for her wicked deeds. However, the Bennets are dedicated to finding her tomb and opening it.

This book definitely has a hint of mystery to it as well. The wicked lesser wife was chiseled out of history for evil deeds, deeds that are hinted at but not defined. So I definitely want to know more about her. Plus Julian and Laura have this lovely committed relationship, both as Egyptologists and as lovers. So I want to know more about their lives and past adventures.

If you read the blurb on this book, then you know that not all make it out of the book alive. Those left alive must hunt the now freed wicked sorceress. This is another reason I hope there are further books in this series. I couldn’t find a series on Goodreads or Audible, though there appears to be at least one other book set in modern day Egypt (different characters).

While this book left me wanting more, it also left far too many questions open for me to be satisfied with it.