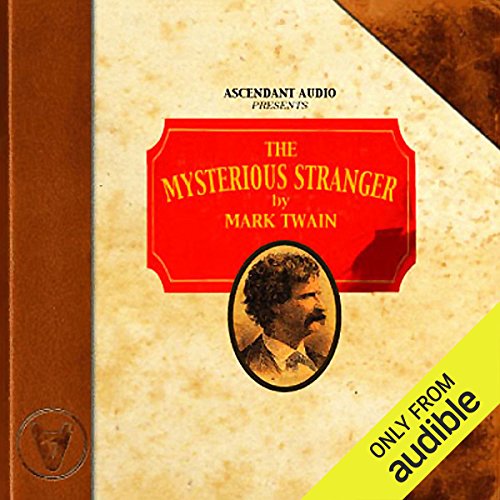 Considered one of Twain's most important short works, The Mysterious Stranger tells the story of the devil coming to a medieval village in the persona of a beautiful, lovable, yet exasperatingly amoral young man. Befriending a small group of boys, Satan exhibits strange charm, compassion, and indifference as the tale comes to a surprising comclusion.
©2006 Ascendant Audiobooks LLC (P)2006 Ascendant Audiobooks LLC
Classics Literary Fiction Satire
Show More Show Less

What listeners say about The Mysterious Stranger

I got, perhaps 10 minutes into the story before stopping it. The Narrator is very difficult to listen to. He recites the story rhythmically as if it were poetry (which it's not), offers no characterizations, and has some very irritating vocal habits (like a very bizarre pacing of the word "and"). It's absolutely maddening!
I'd recommend looking for a recording with a different narrator, if possible.

The narration is perfect for the story.

I felt as if I was being read to by ol' Sam Clemens himself. Don Randall captured the spirit of the period better than I would have hoped he would, especially after reading some of the negative reviews..

Indeed, a very thought provoking piece, and I feel one of Twain's best. Especially the ending.

I am new to the audiobooking experience and so I cannot judge the performance. This story is difficult to read with the depth of feeling of the words and the narrator did his best.

As to the story itself, it is a familiar one. An angel appears before a group of young men, exposes their gentle minds to the truth and in the end they have nothing left to cling. The story is written in wonderful Twainian irony, one can see plainly that the punished are innocent though the narrator (blinded by prejudices) cannot. Twain here uses the story-telling medium as thought experiment and his experimental results are fascinating. Twain here is a very serious philosopher, and one cannot help but be affected by the power of his demonstrations.

I would recommend that one read a different Twain novel first, else one might be deceived into thinking his wit could only be used negatively, but this is sure to reveal much anyone who reads it.

Not standard Mark Twain story, but very good any

Would you consider the audio edition of The Mysterious Stranger to be better than the print version?

I really liked the consistency of the characters, even though some of their actions were really unlikable! I like the overall, (lesson?) theme.

I liked when the friend died, despite the fact that that sounds negative. It was part of the reality.

This is just awful. I've heard its a great story, but get the other version. Imagine if Casey Kasum and a boring old preacher reciting bible verses had a baby. That's how this guy reads it. His voice is okay, but his cadence is so bad, that its a waste of money to buy this, because you won't listen to the whole thing. Theres another version that's a few bucks more. Go for that one.