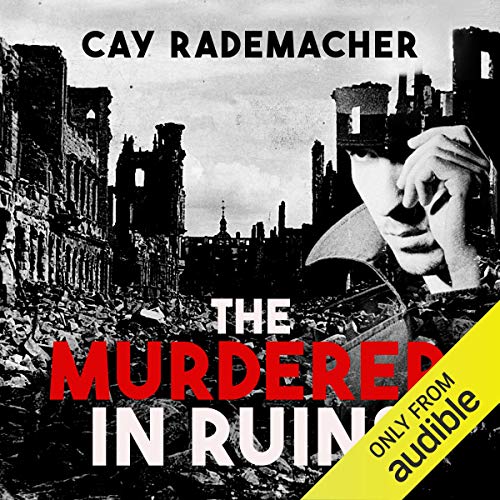 The Murderer in Ruins

By: Cay Rademacher
Narrated by: Mark Meadows
Try for £0.00

Hamburg, 1947. A ruined city occupied by the British who bombed it, experiencing the coldest winter in living memory. Food is scarce; refugees and the homeless crowd into shantytowns and sheds. There is a killer on the loose, and all attempts to find him or her have failed.

Plagued with worry about his missing son, Frank Stave is a career policeman with a tragedy in his past that is driving his determination to find the killer. With the help of his colleague Maschke from the vice squad and Lt MacDonald from the British military, Stave has to find out why - in the wake of a wave of atrocity, the grim Nazi past and the bleak attempts by his German countrymen to re-create a country from the apocalypse - someone is still dedicated to murder.

A spine-tingling portrayal of pure evil, with multiple twists, turns and subplots. What, or who, will rise from the ashes?

What listeners say about The Murderer in Ruins

Murderer in Ruins" is a novel set in an almost destroyed, post war Hamburg.  Frank Stave is a detective who is asked to investigate the discovery of a naked women hidden in the ruin strewn city.  She is the first but she won't be the last.  Stave, working with his colleague, a British army officer and a seconded detective from the Vice Squad work to find out who she was and what may have lead to her death.  During the investigation a further two bodies are discovered, that of an elderly man and a child both meeting the same fate as the first victim.  Stave and his team have to establish if the deaths are linked and if so, by what?


This is Cay Rademacher's debut novel translated from German into English, and is good read, there are several twists and turns.  In my view readers of Luke McCallin and Philip Kerr would particularly enjoy the Frank Stave series

I have never tried this author before but I will definitely be listening and or reading his other books.
The plot is very good with unexpected twists and turns and the characters very believable and in the case of the good guys I liked them a lot. The descriptions of Hamburg after the war are so clear you can almost feel you are there. I also liked the narrator he seemed apt for the characters and storyline.
I thoroughly recommend

Super exciting book, very well written & researched. Just had to listen the whole way through. Going right to Audible to buy the next: The Wolf children.

This was poorly written, nothing much happened until chapter 11, and it finished at chapter 16. I wasted my time listening to this, waiting for it to improve. Save yourself the bother, don’t even start if

I'm always happy to find a new murder mystery series and CI Frank Stave books are a welcome addition. It does run a bit long in places, but I will chalk that up to character development. The writer also gives a great description of the what life was like in post-WWII Germany. There are a lot of twists and turns for the listener to enjoy. I've added Book 2 of the series to my wish list and am looking forward to enjoying it.

What a pleasant surprise! A great book with an interesting lead character and a unique setting for a police procedural - Hamburg after WW2.

The narrator was also fantastic.

Would you listen to The Murderer in Ruins again? Why?

So happy i found this book. Listened to it and immediately bought the new one, The Wolf Children. Please Audible, buy the English translations of the rest of the author's books.

The story was compelling but what i loved the most is having the story set in a time and place that i knew little about, namely early post WWII Germany.

I am hooked. And i don't often take time to write a review.

What does Mark Meadows bring to the story that you wouldn’t experience if you just read the book?

He didn't get in the way of the story.

Intellectually, I was aware of the fact that after the German surrender the situation in Europe did not return to peace and prosperity immediately. However, I feel this story did quite a lot to help me understand how things were for a while afterwards. Author totally succeeds at bringing us into a world of devastation and (gradual) renewal.

Stave proves an incredibly likeable main character; I found myself immediately invested in his success. The secondary characters were also quite well done, although there were a couple that I wasn't as "into" as I suspect I should've been. Overall, they worked well, another success on that front.

Finally, we come to the plot itself, which left me with doubts as to whether I be interested in a sequel, up until the end. The story did come together for me so that I'd be interested in that, but to be honest at times that aspect felt as though it was secondary to a character-and-setting driven story. ("Where is all this going?")

Audio narration and translation are top-notch. If you feel this sounds interesting, you'd probably like it.

The books plot is a little mundane and doesn’t develop the characters as much as I would like but it does give an atmospheric post war sense of life in a bombed out city. Worth the time spent.