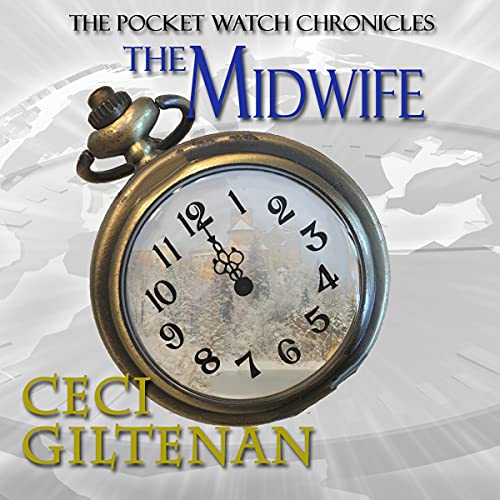 Can a 21st-century independent woman find her true destiny in 13th-century Scotland?

At his father's bidding, Cade MacKenzie begs a favor from Laird Macrae: Lady MacKenzie desperately needs the renowned Macrae midwife. Laird Macrae has no intention of sending his clan's best; instead he passes off Elsie, a young woman with little experience, as the midwife they seek.

But fate - in the form of a mysterious older woman and an extraordinary pocket watch - steps in.

Elizabeth Quinn, a disillusioned obstetrician, is transported to the 13th century. She switched souls with Elsie as the old woman said she would, but other things don't go quite as expected. Perhaps most unexpected is falling in love with Cade MacKenzie.

What listeners say about The Midwife

Ceci Giltenan is fast becoming one of my favorite authors. The 2 books in this series are the only books she's penned I have listen to but I've thoroughly enjoyed both.

I think I like The Midwife even more than "The Pocket Watch". Ms Giltenan puts a unique twist to time travel. In "The Midwife" Dr. Elizabeth Quinn meets a mysterious older woman on an airplane who makes her an unbelievable offer; to be transported back in time. Of course Elizabeth does not believe it, but she is so tired from being on-call the night before delivering babies much like an assembly line, and having to finalize her presentation for a professional meeting in new York, she accepts an antique pocket watch for time travel more to get rid of the older woman than believing she can travel back in time, but tells the old woman she will try it. The snow storm that delayed landing at JFK Airport worsens after landing and when Elizabeth takes a Taxi to her hotel room they are involved in a several car pile-up on the way. She is knocked unconscious in the accident and wakes up in the 13th Century being dragged into a castle to face a dangerous Laird who orders her to pay attendance on the wife of a Laird of another Clan.

I adore the pocket watch series! This one included a twist I couldn't have anticipated too. Medieval men and headstrong smart women... so good!

Narrator: Paul Woodson will never be known for the soft delicacy of a young woman's voice, it's not in his repertoire! But everything else is and that much is worth every moment.

Heat Factor: Pretty much non existent but it totally did not matter! Chemistry evident, sex absent.

I haven't had a story to bring me to tears for months. Go glad I found this jewel, the reviews are spot on. Love,friendship, honor, hope this book has all this and more.

What a very delightful blend of the past and the present! Cecil Giltenan never disappoints and has captivated my attention with this wonderful book! In-depth characters, a creative paranormal romance with a twist, and all set in the beauty and majesty of Scotland. Paul Woodson is a very talented and skilled narrator as well. I have bought and listened to many of his audio book recordings and enjoyed his professionalism and talent every time. This is one I'd recommend to anyone. The romantic scenes were written and performed very tastefully. Now, on to the next book in the series. 😀

Would you listen to The Midwife again? Why?

OK so the story line may have been a bit predictable as the first pocket watch book kind of lays things out but I loved the characters and couldn't wait for the next page turn.