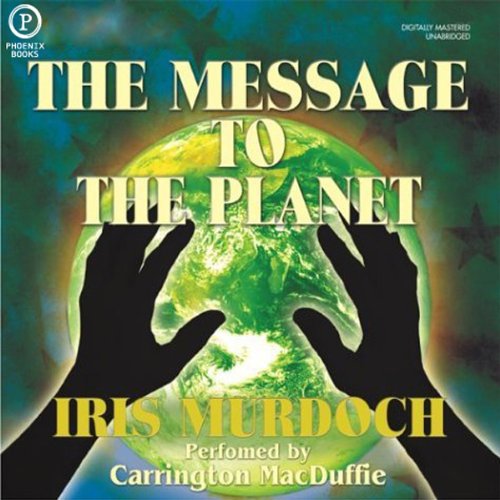 The Message to the Planet

By: Iris Murdoch
Narrated by: Carrington MacDuffie
Try for £0.00

For years, Alfred Ludens has pursued mathematician and philosopher Marcus Vallar in the belief that he possesses a profound metaphysical formula, a missing link of great significance to mankind. Luden's friends are more sceptical. Jack Sheerwater, painter, thinks Marcus is crazy. Gildas herne, ex-preist, thinks he is evil. Patrick Fenman, poet, is dying because he thinks Marcus has cursed him.

Marcus has disappeared and must be found. But he is a genius, a hero struggling at the bounds of human knowledge. Is he seeking God, or is he just another victim of the Holocaust, which casts its shadow upon him and upon Ludens, both of them Jewish? Can human thinking discover the foundations of human consciousness? Iris Murdoch's endlessly inventive imagination has touched a fundamental question of our time.

"Carrington MacDuffie gives a fantastic performance, carrying the book through cumbersome philosophical discussions and straightforward drama with equal ease. Each character has a distinct and appropriate voice, making the profuse dialogue a pleasure to hear. As the drama unfolds, along with the loves, betrayals, and intricate triangles, MacDuffie rises to the occasion, taking the listener along for the ride through Murdoch's strange world." ( AudioFile)

What listeners say about The Message to the Planet

The Message to the Commissioning Editor

Iris Murdoch created a mythic upper-class English world as recognisable and idiosyncratic as Graham Greene’s ‘Greeneland’, but its essential feature for the purpose of this review is its irredeemable Englishness, with all that that connotes. When we listen to an audio book – pace its many advantages – the aural playing-space of our imagination has to surrender to the domination of another’s voice so that we are, to a particular extent, at his or her mercy. The reader in this case is the highly versatile and gifted Carrington MacDuffie who hails from North America and who clearly delights in trying out a variety of British accents to ‘bring the book to life’; the results however are – with the curious exception of Irina’s – lamentable and verging on the pantomimic. Honesty is demanded here, not least because the unwary buyer may be forking out the full price of £31.59 for the download and deserves to be forewarned; but also because the eyes of the editor may fall on what I record here and who knows: this may start a ball rolling wherecommissioning policies and practices are reviewed.

We all have opinions, but they are of no account here: let us stay with the facts. Throughout the entire book Ms MacDuffie’s spirited attempt at English intonations is sabotaged byher relentlessly pronouncing words with an American stress accent rather than English: that is, privileging final vowels over penultimates (viz., ‘garAGE’ for ‘GARage’.). In Murdoch’s Oxford English world this creates the aural equivalent of someone in a performance of Julius Caesar going on stage arraigned in traditional costume but wearing glasses. Ms MacDuffie clearly has the correct idea that Scots’ voices and Irish voices sound different from Oxford English, but assuredly no Scot or Irishman ever sounded like these, not even in the days of Music Hall entertainment. Some words are so bizarrely mispronounced that I cannot believe that any type of American accent would treat them so: ‘docile’ – a favoured word of Murdoch’s – regularly comes out as 'dossill', rhyming with ‘fossil’, to give but one instance, whilst short vowels are sometimes lengthened, to disconcerting effect. (‘Cosmos’ becomes 'cosmose', rhyming with ‘morose’, ‘veranda’ mutates into 'verarnda', to rhyme with ‘demand a’.)

If that were the worst of it, we would let it go; but unfortunately Ms MacDuffie extends her vocal characterisations beyond the Celtic, so that we are treated to the central character of Marcus, whose ‘voice’ is achieved by sinking her own into her boots as a woman might in imitation of an embarrassing uncle, whilst the ‘Scottish’ Alison, whose voice she sends in the other direction makes her sound about ten years old. Ms MacDuffie has a good stab at Patrick, the Irishman, though unfortunately it is the accent more of an Englishman in the pub trying to add verisimilitude to a joke beginning, ‘there was this Irishman…’ But the nadir is reached with the introduction of the Stone People, whose vocalisation crossed the line between the ridiculous and just anger-making: I say this because when Murdoch invites the outside world into the carefully constructed arena of her novels, it is a moment always pregnant with significance, and one needs to concentrate. What happens here? One can almost imagine Ms MacDuffie’s thinking, now what voice shall I give them? The answer is readily apprehended by anyone who has sat through Dick van Dyke’s ‘Cockney’ accent in Mary Poppins.

I hope I have not been unduly harsh, but presumably Ms MacDuffie did not do this reading for love and was paid for it; and this is an expensive download for anyone not using a credit. Audible should not be allowed to produce such results at such a price and go unchallenged: I hope someone in the corporation will take note.

I first read this book many years ago when it was first published and I really enjoyed renewing my acquaintence with it. The professor, the friends, the artist with his unusual life style all classic Murdoch and keeps you enthralled from beginning to end. the narrator does not get in the way of the story with no jarring accents or voices that don't match your expectations.

For seasoned readers of Iris Murdoch, no more need be said. The experience cannot be summarized. Certainly, no critique is worth anything.

For those who have not yet read an Iris Murdoch novel, no more can be said. You just have to read it and see where it takes you.

Fanaticism in the English Countryside

Murdoch is an outstanding but now somewhat less read author from the late twentieth century. Her prose is a bit plodding but
her characterizations and psychological analyses are very absorbing. There is a very leisurely pace to her plotting that still holds my attention, reminding me a bit of Thomas Mann. She is very concerned with what each character is wearing at each entrance which is a very irritating element of her writing personality that I can let go but I noticed it more and more as I read . This novel is very like The Book and the Brotherhood as I remember it. The Sea The Sea is really Murdoch's masterpiece for my taste. Her fanatic genius character is well drawn here. I loved the narrator's reading.