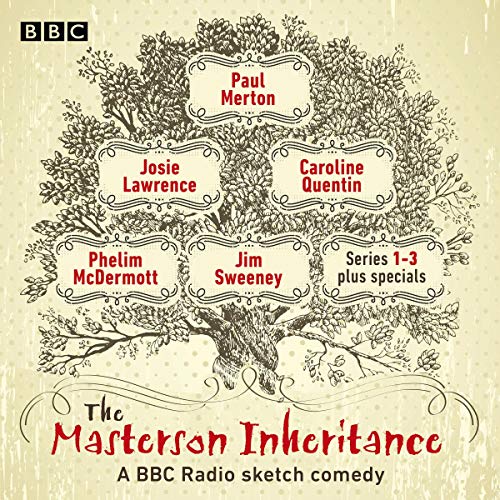 The Masterson Inheritance: Series 1-3 Plus Specials

Based entirely on audience suggestions, this hysterically funny historical drama tells the thrilling extended story of an aristocratic family at war with itself. From ancient Rome to 1920s Hollywood, we follow the Mastersons’ turbulent history across the centuries as their fortunes wax and wane and their fates hang on objects as diverse and unlikely as a tumble dryer, a rabbit’s foot and a pair of Siamese twins.

In these three series, their adventures include setting sail across the Atlantic (with a cargo of dangerous sheep), mucking out at the court of King Arthur, becoming embroiled in murder and intrigue aboard a luxury cruiser, and running away to join a Victorian travelling circus. There’s family revenge in the Wild West over dodgy dental work; the medieval Mastersons face land struggles and an overcrowded castle; and in the Edwardian era, suffragettes split the family, sparking drama at the races. Plus, in two Christmas specials, the Mastersons face repercussions from a child’s innocent gift, and the family’s ancient culture reveals some curious customs.

What listeners say about The Masterson Inheritance: Series 1-3 Plus Specials

Made me chuckle! Great cast too. More like this audible BBC radio comedy at its best

I purchased this book as I enjoy comedy radio shows and I found this listen first rate! It made me chuckle the first time I listened to it and I still does even after several listens! A great listen and I look forward to any future shows.

This has been a brilliant listen

loved it I listened to this several times really enjoyed the characters the stories the laughs the raunchy humour.

I've loved the crazy, unpredictable and hilarious stories of the Masterson family for years and am so happy they're finally available to own.

Doesn't live up to its own description

The key thing about this series is (as it likes to tell us in every episode and in the description here) 'based entirely on audience suggestions' and that's really not true. Each episode begins with the audience being asked for suggestions, but they don't really matter.

The narrator will say when and where the story is set, then ask for something like 'an item you look for', an audience member will say 'keys' and then later on a character will be looking for keys. The item doesn't effect the story. The audience suggestions are, on the whole, usually rather boring anyway.

I was expecting the audience to be involved throughout, repeatedly being asked for ideas to really keep the performers on their toes, but the audience contribution is really the least worthwhile aspect.

I'm a big fan of the performers here and really enjoy this style of comedy, but I listened to the first six episodes and wasn't very amused. Too many of the jokes rely on the performer doing or saying something counter to what the narrator just said. It's funny a couple of times, bit soon loses its charm - which really sums up the whole show.