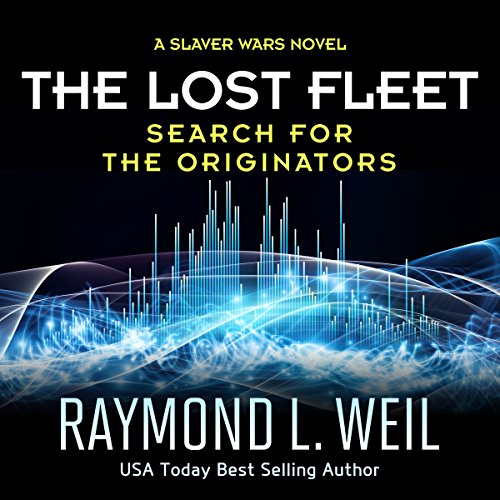 The Lost Fleet: Search for the Originators

After the destruction of the Dyson Sphere and six Simulin worlds, the situation in the Triangulum Galaxy calmed down. For over seven months, the people of Gaia and the Lost Fleets knew peace.

The mystery of the Originators only deepens when a new warship appears over Gaia. The secret it holds will shake the Lost Fleets and change their future forever.

But now the Simulins are once more on the move. They've rebuilt their fleet and are determined to destroy Gaia and Fleet Admiral Strong's forces. They will risk everything in a winner take all battle.

Kazak, the Originator AI, is making his own demands. Demands that could weaken Gaia to the point that the planet would be left helpless if the Simulins attack.

In a desperate move, Fleet Admiral Strong takes a daring gambit to save his people. But even the best of strategies can go horribly wrong.

What listeners say about The Lost Fleet: Search for the Originators

I have loved the storylines in this series. However, the narration has, for me, spoilt it, hence only 4 stars overall.

Terrible shame really as I would like to have continued the journey as it looks as though a new direction is about to open up, but I think I'll give it a miss now.

the narrator is so annoying

The story is juvenile and not believable. Good idea but just poorly written and the narrator is just laughable.

And the start of a new chapter... I look forward tot the next in the series.

Not sure if the story is just so-so or OK due to poor narration.
The inflections and tones used remind me of a school teacher or grandfather talking down to children.
Made the story very hard to get interested in as it was so boring to listen to.

Could also be that the story is too average and characters too flat to feel any emotional investment in, as one would with dynamic characters that exhibit depth & complexity.

Maybe I'm getting tired of the Aliens who's mindset is kill everyone who isn't them. I find it hard to believe that intelligent beings capable of advanced star travelling, would be so simple & closed minded. "There can be none but Similans. There can only be Simlians." (Apologies if there's any spelling mistakes with races/places.)

[But then again our current political circumstances show how easy it can be to dupe the masses and convince so called intelligent people to embrace what seems to be a way too similar "us against them" mindset.
Sorry, the similarities just whacked me over the head when I started my rant against this stereotypical Alien.]

So, the characters lack emotional depth, the Aliens the same and the narration is lacklustre and "schmarmy" - hard to find the right descriptives, but it's annoying as heck, though probably great for a young childrens book? Maybe?

Add to that an overuse of similar adjectives. Too often in the same sentance. "There was a dangerous amount of laser shots filling the space in this dangerous space battlespace." That's not an actual line, but easily could've been. (it's a lot harder to go back through an audiobook to find a line than a paper one, but it makes my point.),

Sadly, there's way too many of these repetitive descriptives in single sentances and repetition of the same action, similar to "There was a lot ships dying in this battle where a lot of ships were being destroyed but Jeremy knew going into this battle that a lot of his ships would be destoyed because it's inevitable in war that you would lose a lot of ships."

(And yes, I just added all those "like's and you know's" and repetitions to make my point as annoying as they felt to me in the book.) Is it filler? Is it lack of imagination? Fatigue? I don't know. I would like to know where the Editor was, as they did a huge disservice to the author.

I'm obviously not a professional writer, but I can see how while cranking a story out, it's easy to make such mistakes and I know it's harder to spot your own mistakes, thus, the need for Editors. With some editing, a good thesaurus AND a great narrator, this could possibly be a fun sci fi read.

As it stands though, it's one that I'd occassionally pick up the next in the series because it's been awhile, I've forgotten how much I didn't like it, there's one on sale and I'm a hurry to grab a book. Plus using an app instead of my PC it's hard to see how I rated the previous books. Or maybe they were better? I'm not sure. Sometimes books get rushed for deadlines, etc., I just know I had a hard time enjoying this book and put it down several times. I almost didn't finish it.

So if you're bored, it's a low price and you need a book you don't have to pay a whole lot of attention to, then you might want to pick this up. If your credits are precious and/or you're looking for meaningful sci fi, I'd pass.

Apologies to the author, I think he could be putting out much better books with a good editor and a better narrator. RC Bray or Christopher Rummel for example. (It's much easier to be an armchair critic than the author, of course.) I think there's the backbone and potential for these books to be great fun and a much more compelling story with a little polishing and rewrite AND PLEASE, Another Narrator!

This was the conclusion to a series but it's got "more series to come" wriiten all over it. There's a whole new 'world' to explore where they've resettled, a new enemy to fight and kids to grow up and fill their parents shoes, so who knows what might come next? You can bet a continuing series is. I hope it will be fresher.

If you found my review helpful or of interest at all, please give it click. I consider reviews by others when looking for new books, so if you can, please review what you've read. You never know, it might help others. Thanks.

I enjoy this series. it keeps me going. this book actually kept me on the edge of my seat. it was a good listen.