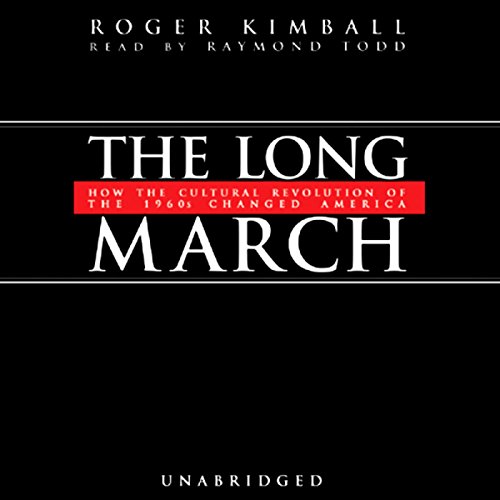 By: Roger Kimball
Narrated by: Raymond Todd
Try for £0.00

The architects of America's cultural revolution of the 1960s were Beat authors like Allen Ginsberg and Jack Kerouac, and celebrated figures like Norman Mailer, Timothy Leary, Eldridge Cleaver, and Susan Sontag. In examining the lives and works of those who spoke for the 1960s, Roger Kimball conceives a series of cautionary tales, an annotated guidebook of wrong turns, dead-ends, and blind alleys.

According to Kimball, the revolutionary assaults on "The System" in the 1960s still define the way we live now, with intellectually debased schools and colleges, morally chaotic sexual relations and family life, and a degraded media and popular culture. While some may think of the 1960s as "the Last Good Time", Kimball paints the decade as a seedbed of excess and moral breakdown.

"Roger Kimball delivers a shrewd judgment...Its dissection of the ideas that coalesced into cultural revolution is Superb." ( Wall Street Journal)

What listeners say about The Long March

Where you live appears to explain your review. An opinion from the right is as valid as a review from the woke left surely comrade

I think Kimball is a middle-class, conservative and racist bigot who looks down on anyone who listens to 'rock' or 'pop' music; artists who are not rooted in the classical tradition; the masses, who he deems infantile and morally corrupt. Indeed anyone who does not agree wholesale with his constrained view of them and us. The whip, the old-school-tie and 'spiritually' moral guidance are Kimballs world. Don't expect to learn anything of Sixties America here, it's basically one long moan from start to finish from a man whose mind closed 50 years ago.

This volume put all the pieces together from what government schools and John Dewey have taken away from the baby boomers through generation Z. If you want to know “who done it” Here are the culprits, the villains, and even the leftist radical heroes and heroines. Read this tone and learn their names and teach your children well.

I loved this book. It was both perfectly written and narrated. In fact, I so enjoyed it I listened to much of it two and three times. The author provides an authentic, well researched scrutiny of the 60's revolution -- the roots, the personalities that came to influence and their motives, coalescing factors and how they were unscrupulously leveraged and manipulated, and serious ramifications (many to which we seem blind!) from a time of unquestionable revolution in this country as pervasive and enduring as China's cultural revolution. For me, it filled in the blanks, unmasked some indeterminate forces behind the times then and remaining today, and gave me a clear perspective of something I knew but wasn't able to fully articulate until I read this book. I highly recommend this book to anyone of any generation to better understand either what happened to a whole generation then or how we got where we are today... and do acquire some outrage over lost values and that generation duped out of its integrity. This is an historical perspective not to be missed!

In this book Roger Kimball describes in great detail how the "Cultural Revolution" was launched against the fabric of our nation. True there are those who upon listening to this will begin foaming at the mouth as Mr. Kimball attacks and demolishes their cultural icons.

Whether one agrees with Mr. Kimball's own values is a matter of personal choice. One can not deny that the material he presents here is true. A group of cultural elites waged war on the values and ideas of a nation. Their ideas were hardly new. I was born after the events in this book occcured. That means that I and my generation have a lot of work ahead to undo the intense damage that our parents generation have done to our nation. Thank you Mr. Kimball for showing us how we arrived at our present day crisis.

Collection of the 60s most eccentric minds. Verry funny. The writing is perfect. The narrator is equal to the task. Oh and it's illuminating as well. Of course this short biographical review of aquarius figures is necessarily incomplete.

The Worst Audio Book I have Ever listened.

I found this book to be one of the most difficult books to listen to that I have ever purchased. Even given some of the excess of the 1960s and the legacy of that time the author finds nothing redeeming in the times or the peoples. The book if mean and spiteful. I am not a fan of the cultural revolution of the 1960's and especially some of it's leaders. Mr. Kimball certainly exposes many of the leaders of the times but does so in a way that makes him look nothing but hateful. I feel that despite the execess of the times there were some good things that came of it. I could not wait for this bood to be over and forced myself to finish it.

A primer on the counterculture evolution.

The author frames the rise of the 60's counterculture from the rise of the beats in the 50's to the 70's. He touches on some of the bigger names in the movement, names we've all heard at one time or another, but were never really sure of what they did. I googled most of these names as the author addressed them. I was surprised to see that they were described as "political activists'. To my mind such folk are no more than Marxist traitors.

The author accurately describes how long this march has been, and we can see every day that it continues.

This book is a primer for anyone interested in learning the names of the folks who had the greatest influence on American culture during the time typically called "the 60s". The reader will also learn a great deal about the general philosophy of those folks. Not being familiar with the subject matter myself, I cannot weigh in with any authority on the completeness of the author's coverage of the subject matter. But I can certainly attest to the exhaustion felt I trying to keep up with the information presented. This book lays bare the completeness of the win that the left experienced through the changes America dealt with in the 50s through the current times.

I struggled and didn't finish this book. he seemed very interested in other people's sex lives and or who they had sex with. In his opinion, all the music, all the writing, and especially all those communist liberal bastards sucked. a sad guy wanting to tear it all down because it doesn't fit his "Leave it to Beaver" or "Ozzie and Harriet" view of how life in America should be.

USA is a creation of innovation & commotion. The ideological & cultural architecture of the US continues to evolves. This work gives an informative feel of how flawed most of the thinking was, is & will be as the republic evolves.

This was so awful I am looking for a way to permanently delete it so I never have to see it again in my library.