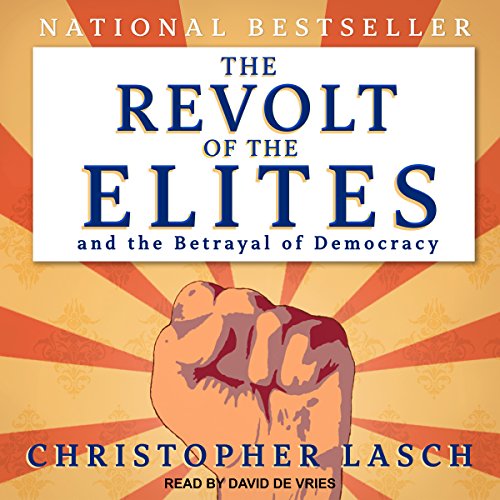 The Revolt of the Elites and the Betrayal of Democracy

By: Christopher Lasch
Narrated by: David de Vries
Try for £0.00

In this challenging work, Christopher Lasch makes an accessible critique of what is wrong with the values and beliefs of America's professional and managerial elites. The distinguished historian argues that democracy today is threatened not by the masses, as Jose Ortega y Gasset (The Revolt of the Masses) had said, but by the elites. These elites - mobile and increasingly global in outlook - refuse to accept limits or ties to nation and place. As they isolate themselves in their networks and enclaves, they abandon the middle class, divide the nation, and betray the idea of a democracy for all America's citizens. This is Lasch's clarion call for a return to the virtues of community, responsibility, and religion.

"Lasch is so pithy and cogent that he produces the kind of book that makes you want to corner friends and read it aloud to them." ( Booklist)

Very interesting and profound insights into modern culture, a bit dense and convoluted at times.

We moved from a small town outside Chicago in 2000 to northern VA. What my family has seen and experienced these last twenty years is the rise of plutocracy and oligarchs. Though a heady listening experience, I think the majority of Americans don't understand what is happening to this country. We must come to understand so we can reverse course. Not one for conspiracy theories,I know there is a Few of Them vs. the Rest of Us. We need a government strong enough to enforce the Constitutional rights of us all.

Another home run by Lasch!

If you are unfamiliar with the works of Christopher Leach, get familiar (as Jack Nichelson's character said in the movie The Bucket List). This work was a treatise on society in the United States and reflective of the West, in general, on how globalization and the upwardly mobile (then still called Yuppies-the book published in 1994) as well as those who were at the wheel of the information age were dismantling society and the culture as it existed then (moving from the mid 70s to the early 90s) from a more family and community centered landscape to one of a disconnected society of denationalized citizens. Due to their new found wealth and upward mobility, they have become mere spectators of their own democracy with barely a residual hint of patriotism but yet with a fait accompli ideology espoused now by this nouveau riche of narcissism and brazen detachment to community and country. An insightful commentary on the nation's culture then and a prophetic discourse for where it is now.

Whoever thought republish this book in 2017 knew the cultural mood. I can't believe it was written in 1993. The book hit on every aspect of the current online debate and added way more to the origins of the problems faced today then any youtuber or current author does

When during an interesting passage of this audiobook, it went silent. The numbers kept moving, but no sound! This has happened at several places in other recent books, including some by Joan Didion.

What's going on? QC no longer on the job? Refund coming to me?

Last chapter was excellent. In others, easy to get lost. This might be better appreciated in book form, where you can digest and ponder each topic.