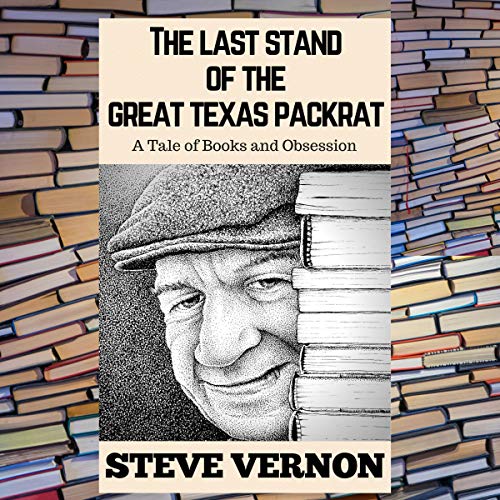 The Last Stand of the Great Texas Packrat: A Tale of Books and Obsession

By: Steve Vernon
Narrated by: Derek Dysart
Try for £0.00

Texas Jack Page, on the eve of his 48th birthday, emptied his last seven cartons of books, placing them volume by volume across his front door - a one-man human cask of Amontillado interring himself inside a shining silver Airstream trailer sized aluminum tomb of tomes.

"The story is a cracker. An ageing book collector called Texas Jack Page looks back over his life, his loves and hopes and regrets, and waxes philosophical about the books that have kept him going. Avid readers and collectors will recognize some of themselves in Texas Jack Page; everyone else will be touched by the pathos of this character. To say more would be to ruin the effect, so I'll say only that this story tugged at my heartstrings while making me smile. I honestly cannot recommend this book enough. The tale is lyrical and knowing, and the chapbook itself is a thing of wonder, created with real affection." (Whispers of Wickedness)

"Steve Vernon pays homage to horror authors and bibliophiles in this tale of Texas Jack Page, a collector of books including horror books. Texas Jack’s obsession with his books, starting from an early age, continues to dominate his life and ultimately leads to some very strange developments." (Monster Librarian)

What listeners say about The Last Stand of the Great Texas Packrat: A Tale of Books and Obsession

It was an interesting if sad tale, short but bittersweet. My only criticism is that at one point when he's going through the books he's collected or looked for he mentions 'Mary McCaffreys Pern Cycle' now i'm sorry but getting her name wrong is a big annoyance for me. Its Anne McCaffrey. Otherwise it was enjoyable.

The narration was good and clear and fitted the story well and there were no background noises or lipsmacking.

The Last Stand of the Great Texas Packrat tells the story of 'Texas Jack Page' an trailer park man and collector of books. He has thousands, ranging from rarities to beloved classics to special one of a kinds (such as signed books, or a book 'borrowed' from a President). Texas Jack is known all over the internet as a fine collector of books, but in his life he is a reclusive man, living in a trailer and battling the weight of his history.

It's a much different story to most of the Steve Vernon books I have read. This is a literary work, compared to the horror or humour I have previously seen from him.

The book is abut the magic of books, the ability for them to take you away and create a world for you. To live in and be enveloped by. It's a ode to the love of books. But it's also about how that is a two edge sword, where you can live for your books and escape from the world, to the detriment of your work.

Narration by Derek Dysart is good. Nothing outstanding, but there is little in this book to allow him to show his range and ability. there is little to no dialogue. He is clear and well paced. No issues. So enjoyable and a solid performance.

The story is brief but it has a lot packed into the space. You get to understand how a man's passion for books becomes an all consuming obsession. This becomes his downfall. I listened to it this morning on my drive to work and again when I got working. I really enjoyed it. It reminded me of when I was first married and my wife wanted me to sell my comic books. I just couldn't bring myself to part with a single one. After much arguing I had told her that I would rather burn them than sell them. In my mind, at the time, I thought the idea of anyone else having them was the worse than burning them to ash. The way that the Texas Packrat wanted to be buried with some of his priceless book reminded me of that.