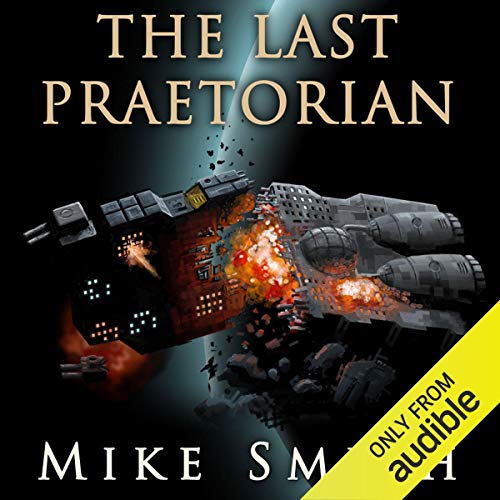 By: Mike Smith
Narrated by: David Benjamin Bliss
Try for £0.00

Commander Jonathan Radec is a man desperately trying to escape from the mistakes of his past. Now the owner of Vanguard Shipping, his primary concerns are trying to keep his ships flying and his crew alive. However, the shadowy Syndicate organization has set their sights on the commander and his business, having sent a beautiful assassin to kill him. To make matters worse, she's become the target of his infatuation, much to the dismay of his ex-girlfriend. Recently elevated to president of the Confederation, she's still very much in love with him and capable of making his life a living hell.

Surrounded by a galaxy beginning to tear itself apart, with enemies on all sides, he's now also unwillingly tasked with trying to save the Confederation - for which he has little regard. Jon has little going in his favor, except a crew consisting of the elite of the old Imperial Navy, all of whom would fight to the death for him, and a past that possibly makes him one of the most dangerous men alive.

What listeners say about The Last Praetorian

Not really worth the candle I’m afraid

Too much smut for a book of this sort. I'd gladly exchange smut for science world building content
Too cheesy: boy from the wrong side of the tracks meets princess, blah, blah, blah
Too stereo-typed: I guess the cold war is back on, all Russian sounding people are evil
No diversity: There are only white people in the future

The narrator is solid and does a very large range of accents very well indeed. He's very easy to listen to, I wish he'd read game of thrones books, then I would purchase them

Since I listened to Steven Moss's "Fear the Sky" I am yet to listen to another Scifi book that comes close in terms of writing and story quality. I wait impatiently for "Fear the Survivors"

Mr. Bliss' performance is the saving grace for TLP

Had David Benjamin Bliss not done such a great job of making this very predictable story engaging, I would have stopped listening within the first few hours. The story is totally devoid of originality, though that alone would not have turned me off. It also, contains so many clichés and inconsistencies, not to mentions the glaring changes in personality the main character displays throughout the story, makes it difficult to listen to the end. It was only DBB's characterizations that got me through. Also, all the characters in the book seemed to be of the European variety and only humanoid (not to mention being very male oriented, there is a grand total of three female characters, four if you count the second-in-command's wife who is referred to on several occasions, but never seen). Now, I am not advocating for alien species or all female navy contingents, it's just that I am not really sure how this can happen in such a vast empire. Somewhere there has to be many more women and people of color. And I doubt that they would be completely like us. I also take issue with Commander Jonathan Radec’s (the main protagonist) super human status. I mean really, he can't out smart everyone and win every battle, its gets boring after a while. And OMG, if you mention one more time that Radec is tall, blond, handsome, strong cheekbones, an amazing physical appearance, and on top of that dressed in his crisp white navy uniform, I think I will scream. He is (literally) the White Knight of the story, Ok, we got it Mr. Disney. The story as a whole, like I said, is predictable, but that won’t stop me from listening to the next two in the series, I just hope that the author (Mike Smith) ups his game.

I have a bit of a problem writing this review because I can not decide if it is the writing that that I find to be a bit juvenile or the main character himself. The story involves an ex-naval officer who used to be the head of a special Imperial detachment, but who is now the CEO of a space station, and his fight against various adversaries out to either kill him or take over his business. There is potential in there for a decent story, but few of the characters in this story seem either real or even plausible. In particular the main character is so racked with guilt over his supposed failures that he is unable to live a normal life and have a normal relationship with others, and it is hard to be sympathetic with his inability to move on. Instead he insists on continuing to hurt those who love him and does not even seem to understand how juvenile his actions are.

I might well have given up half way through the book except I kept reading, hoping to find how one of the protagonists ended up surviving explosive decompression, but other than the explanation that he was "indestructible" I learned nothing. The only bright spot in the book is the narration, which is excellent. The book contains a preview of the next book in the series but I have not bothered to listen to it. I keep asking myself if I want to spend the 30 minutes or so listening to more of this book.

I had a difficult time finishing this book, but had a long drive so struggled through. I think the author was going for a romantic comedy set in space, but bother the romance of the story was all that we engaging. I'll not get any of the other books as I don't care how the story continues.

I get a little frustrated when things go un-said. This book is full of it, but the clever way the author weaves around spelling it out creates just enough tention to read on and not throw the kindle across the room. haha

After listening to Mike Smith’s “The Last Praetorian “ he and narrator David Benjamin Bliss are a new favorite team, for me. This is a great book that draws you in and doesn’t let you go.

Good but too much sexuality

If you could sum up The Last Praetorian in three words, what would they be?

What was one of the most memorable moments of The Last Praetorian?

What about David Benjamin Bliss’s performance did you like?

His voice is clear and easy to understand. Not monotone but also not overly pushed with character inflections.

It was emotionally engaging and kept my interest but it did not drive me to cry. I'm quite certain I laughed a few times.

good performance, but the story is not. I want to know about the protagonist not how he makes love...

Very enjoyable. Easy for me to relate to the characters. Unique in a very comfortable way.