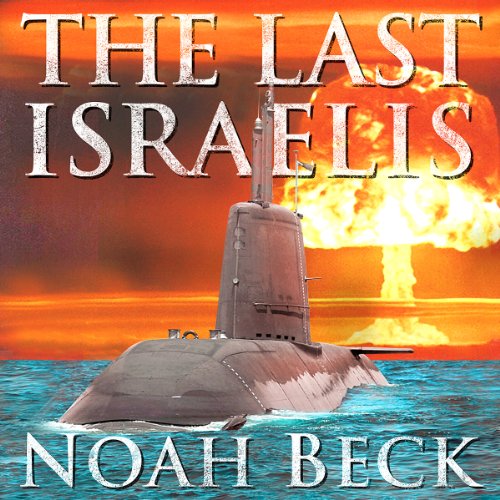 In this gripping doomsday thriller ripped from the headlines...

Iran has threatened to destroy Israel while developing the nuclear capability to do so. Struck by a medical emergency, Israel's Prime Minister falls unconscious just as military action is needed to stop Iran's nukes. History is now up to 35 Israelis aboard the Dolphin a powerful submarine armed with nuclear-tipped ballistic missiles.

Ship unity is crucial to mission success, but deep conflicts rise to the surface among crew members who are ethnically diverse and ideologically divided. On their suspenseful voyage to Armageddon, the submariners must confront pulse-pounding threats at sea before facing an unthinkable dilemma. It will be the toughest decision of their lives - and it will determine the fate of the Middle East.

What listeners say about The Last Israelis

What would have made The Last Israelis better?

Has The Last Israelis put you off other books in this genre?

The genre is very poorly represented. It sways from poorly researched overly Gung Ho action books...to dull-as-dishwater characters with vague plots. What is required is writing of a similar standard to 'Red October' paired with up-to-date well researched scenarios; played out by credible characters with 'real' (or at least believable) human reactions and attitudes...something that allows the listener to justifiably suspend disbelief because he/she is hooked by the plot.

Would you be willing to try another one of Jeffrey Buckner Ford’s performances?

Israel exists due to the unarguably despicable behavior of Western Europeans. In Noah Beck’s debut thriller the continued existence of Israel is now threatened by the nuclear capability and contemptible rhetoric that emanates from Iran; a very real threat that is ripped from today’s headlines. The Last Israelis explores in depth the ethical and moral decisions involved in the engagement of war and Beck skillfully draws the reader into the characters backgrounds and their divergent ideologies. Primarily set on a submarine, the debates are skillfully written to give the reader a real sense of the difficulty of maintaining peace that is not overly Zionist in perspective. Beck is able to walk in quite a few shoes without stumbling and successfully pulls it off.

The plot moves forward with action and twists that occur between the debates toward a climax that will keep the reader turning the pages. Bruckner's narration expertly moves the listener through the plot. There is enough action to satisfy anyone searching for a good thriller with the added benefit of an outstanding moral debate that is so often absent in the Armageddon sub-genre of military thrillers. It’s a “what if” scenario that brings global politics into a disturbing and oh so possible development.

A compelling warning through the voice of fiction

Which character – as performed by Jeffrey Buckner Ford – was your favorite?

Jeffrey Ford does an exceptional job with narrating this story. He handles all the voices and accents well, and his pacing is just right. This was the first of his narrations to which I had listened. I look forward to hearing another story read by him.

Noah Beck has created an engaging story involving a present-day world threat. Through the perspectives of his characters and well-executed action scenes, listeners are drawn into this fiction and into the concerns and challenges facing the submariners aboard the Dolphin. His book's subject: Iran's threat against Israel is presented in a way that makes all who read it give serious thought to this ever-present possibility that is not being taken seriously enough.

A passionate moral fable, not a literature event

I share author's passion towards Israel and the enormity of problems it is facing. Looks like the main purpose of the book is to prove the right to defend the land and the soul of the Jewish people. Unfortunately, this primary objective negatively effects the story, makes the characters schematic (despite the great length of personal history and travails), and lessens the impact of the plot.

I had high hopes for this book, as the subject matter, nuclear war with Iran, is extremely topical occurring in the backdrop of the now completed nuclear negotiations, however disappointment set in from the first sentence.
The writing is wooden, formulaic, unimaginative and as exciting as a wet blanket on a rainy day. The narrator does not make things better by trying to adopt phony Israeli accents.
I gave up after 45 minutes of listening, ( I driving home from work)

Has The Last Israelis turned you off from other books in this genre?

Right Out Of Today's Headlines

This is not a run of the mill novel. The author's premise is based on a nuclear Iran. After reading the book, I came to the conclusion that the novel is supposed to serve as a warning to the world of what a nuclear Iran would be like. The author uses dialogue between characters as a way to highlight the debate concerning Israel's position that a nuclear Iran will not be tolerated. The book is kind of "preachy" regarding Israel's right to stop Iran from obtaining nuclear weapons. I gave the book four stars because, although I thought it was very good, it seemed to blatantly push Israel's viewpoint on the matter to the point of overkill. The narrator was outstanding and he seemed to get in the spirit of things. After reading the book I am even more opposed to a nuclear Iran than I was before, so I suppose that the author served his purpose of writing the novel. I don't want this review to give the impression that the author is simply the mouthpiece of the Israeli government, it is a submarine thriller to be sure. It is no "Hunt For Red October" because it is much shorter and does not go into that type of detail, but it is a good read based on current events. The author tracks submarines and ships using latitude and longitude coordinates, so having an appropriate map of the Middle East nearby would be fun and it would add some clarity to the story. If you're looking for an eight hour read to pass the time and learn a little something about the Israeli way of doing things, this is well worth the credit.

A Great & TImely Thriller by an Amazing Author

Would you consider the audio edition of The Last Israelis to be better than the print version?

Yes, because the major part of the author's book is dialogue and it comes across as more exciting in the audio version.

What other book might you compare The Last Israelis to and why?

What does Jeffrey Buckner Ford bring to the story that you wouldn’t experience if you just read the book?

If you could rename The Last Israelis, what would you call it?

The title is perfect. I wouldn't change it.

The book is very timely. Anyone interested in Middle Eastern policies and affairs should read it! I can't imagine why anyone living in today's world wouldn't be interested.

The author paints a clear picture of what is happening in the Middle East, especially in Iran and Israel. I can't say much more about it without giving away the plot.

The author is great with characterizations. They were very believable, very realistic. I would recommend this audio and print book to anyone!

The Last Israelis provides a rollercoaster nine hours of suspense as the Israeli Prime Minister lies in a German hospital bed after falling into a coma having just ordered his Defence Minister to make ready a retaliatory nuclear strike against Iran.

The cast of characters in The Last Israelis makes for an interesting drama: thirty-five crew members in a nuclear-armed submarine who enjoy a very brief and unexpected dockside party with family and loved ones prior to embarking on their deadly final mission. As the party progresses, no one knows their orders and no one can realise the fates of either those left ashore and those in the lethal vessel, The Dolphin.

The submariners are diverse in terms of their backgrounds, political views and sexual orientations, thus making for lively and significant interactions and debate. Add to the drama some sexual jealousy and social conscience and there is fine material for conflict and resolution as events unfold above the water line.

Read with breathless urgency by Jeffrey Buckner Ford, this is excellent audiobook drama which will keep you guessing and urge you to think about the very real tensions still at work in a conflict-torn Middle East.