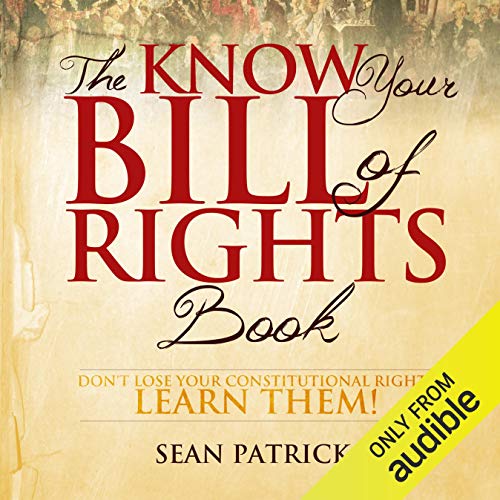 The Know Your Bill of Rights Book

The Know Your Bill of Rights Book

Here's the truth: the Bill of Rights is not easy to understand if you just pick it up and give it a read. The eloquent style in which it's written can be confusing. The language can cause misunderstandings. There's a lot of legal terminology that's beyond most of us. Without an understanding of the historical background of certain amendments, it's impossible to fully understand their importance and scope. And to top it all off, there are countless politicians and pundits that try to interpret our rights for us and tell us what the Founders meant.

But are you comfortable letting crooked politicians decide what your rights are? Or would you rather know and be able to insist on, with certainty, the freedoms our Founders intended for you, your family, your friends, and your fellow Americans? If you're like millions of other Americans, you'll choose the latter.

Better than the lessons taught in school!

Would you consider the audio edition of The Know Your Bill of Rights Book to be better than the print version?

I only have the audio edition, but with information as dense as the Bill of Rights it was nice to be "told a story" about them rather than having to read and re-read a print version, in my opinion.

The Founders, in general, were fascinating to learn more about. Choosing only one, however, James Madison was my favorite to learn about. In my experience, he does not get the spotlight nearly as much as Washington, Adams, or Jefferson, yet he was the one who created the foundation for the Bill of Rights.

I enjoyed the scene's labeled as the stories behind the amendments. While these aren't simply limited to a single scene, they provided a lot of rationale to the amendments and made them easier to digest. Further, they provided context, which makes it easier to apply to what we're seeing in modern day America.

Yes, but it was at the completion and subsequent restarting of the book. After listening to the book the first time and making my way back to the introduction again I felt as though I'd accomplished something. I'll admit that despite being relatively educated I had very little knowledge about the Bill of Rights, the Constitution, or the founding of our country in general. I'd simply retained the amendments themselves on a purely superficial level with no understanding of the concepts, the context, and the rationale behind them, nor did I have any true understanding of the steps that led to their creation. Sadly, I believe that I'm in the majority here and not the minority. As a result, I believe that many of the arguments and frustrations that people are facing today can be solved by becoming better educated about the Bill of Rights, what it means, and just how much care was put into crafting them to best suit the needs of all citizens.

In short, read the book. I'd guess that I'm in the vast majority of people who, frankly, don't know enough about the Bill of Rights. Do yourself a favor and become educated - don't get your education from CNN, Fox, etc. Take a few hours to read/listen to this book. The information in this book will put you light years ahead of most other American's as it pertains to knowledge about where we've been, where we are, and where we could be going. Thanks, Sean.

Do you care about the Bill of Rights?

I's more than just a Reading of the BillotRights

I listened all the way through the end credits, rewinding often. . The ideas are eloquent. A purists solution for the madness of a well honed Democratic Republic. "If we can keep it." Blatantly clear disconnected idealism only. When used as a ( cause to an end ) handbook; the actual application, even sparadically, sings the March of our Failed Republic.

Something that I never learned in school

A short and concise expose on the first 10 amendments of our constitution. Well worth your time and money.

this should be a part of high school education. great reads for all American citizens

Your basic human rights in a nutshell.

This book spells out both the word of the law and the spirit behind it. Wish they taught this more clearly in school.

This book gives a breakdown of the original 10 Amendments with excellent historical background information on each. The book ends with a reading of the Constitution.

For a audiobook of this length I was shocked at how much interesting information was packed into it.

If you are looking for a quick, easy to follow audiobook that gives you excellent information on the Bill of Rights this is for you!

Very informative love it would definitely recommend for everyone. Especially if you trying to become a lawyer or just a citizen that knows his rights