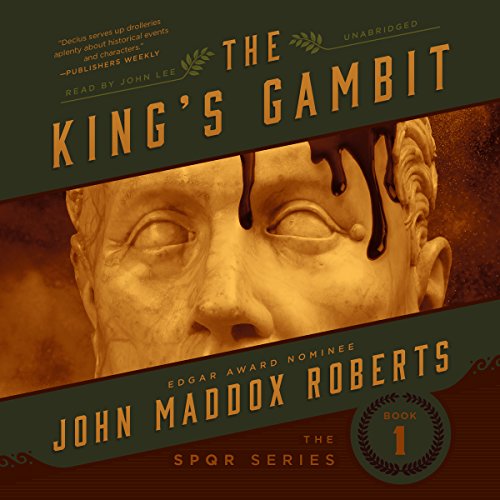 By: John Maddox Roberts
Narrated by: John Lee
Try for £0.00

Blackmail, corruption, treachery, murder - the glory that was Rome.

In this Edgar Award-nominated mystery, John Maddox Roberts takes listeners back to a Rome filled with violence and evil. Vicious gangs ruled the streets of Crassus and Pompey, routinely preying on plebeian and patrician alike. So the garroting of a lowly ex-slave and the disembowelment of a foreign merchant in the dangerous Subura district seemed of little consequence to the Roman hierarchy. But Decius Caecilius Metellus the Younger, highborn commander of the local vigiles, was determined to investigate. Despite official apathy, brazen bribes, and sinister threats, Decius uncovers a world of corruption at the highest levels of his government that threatens to destroy him and the government he serves.

What listeners say about The King’s Gambit

If you've read those, this one is more hard-boiled, less snarky; although, Decimus isn't bad with apt commentary. Technology hadn't changed that much in the century between the series, so day to day life remained pretty similar.

Pirates feature in this story, which I don't recall much in Falco's travels, with one exception and that I recall more as smuggling. I'm a fan of the sidekick Milo, as well as being drawn by John Lee's narration.

Great start to a series

This is the first book I tried in the series and it is a great Sherlock Holmes style detective story - there's a young man from a noble family charged with clearing up crime in a district of ancient Rome, a Greek physician who helps him, dark conspiracy in high places, etc. You get the idea. And you are not sure exactly how it will turn out till the very last page.

Free wouldn't cut it to get me to read another by this author. I'd have to be paid quite a bit. Too many better choices in the world.

author spend too much time describing rome and not enough developing plot. way too wordy!

Historical fiction and intrigue! John Lee is one of my favorite narrators always makes listening a delight!

I enjoyed both the book and the performance very much! John Lee is just tremendous. I recommend his work on the Priest of Bones series. Robert's command of the ancient Roman culture and nomenclature is a real treat!

I don’t enjoy books when the author has the guilty party confesses their crimes in detail to the investigator Instead of just keeping their mouth shut.

Plot was interesting
Historic data great
Best was NARRATION BY JOHN LEE!!!
He made the written word come alive

After a few dozen pages or the readers fine work it occurred to me that I had no knowledge of civilian police work within the Roman Empire. All I knew, and I knew damn little, was of the military cohorts and military/political leadership of Rome. This was a interesting look at the civilian police work done against the backdrop of political rivalry. There were only a handful of Latin words used to deftly to season the story line.
I enjoyed and recommend to any one good story. Good reader and overall good.