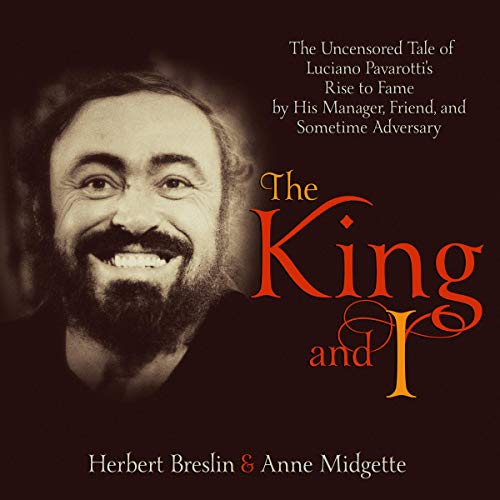 The King and I

This is the story of the 36-year-old business relationship between Luciano Pavarotti and his manager, Herbert Breslin, during which Breslin guided what he calls, justifiably, “the greatest career in classical music”. During that career, Breslin moved Pavarotti out of the opera house and onto the concert (and the world) stage and into the arms of a huge mass public.

How he and Pavarotti changed the landscape of opera is one of the most significant and entertaining stories in the history of classical music, and Herbert Breslin relates the tale in a brash, candid, witty fashion that is often bitingly frank and profane. He also provides a portrait of his friend and client - “a beautiful, simple, lovely guy who turned into a very determined, aggressive, and somewhat unhappy superstar” - that is by turns affectionate and satirical and full of hilarious details and tales out of school, with Pavarotti emerging as something like the ultimate Italian male. The book is also enlivened by the voices of other players in the soap-opera drama that was Pavarotti’s career, and they are no less uncensored than Herbert Breslin. The last word, in fact, comes from none other than Luciano Pavarotti himself!

The King and I is the ultimate backstage book about the greatest opera star of the past century—and it’s a delight to listen to as well.

What listeners say about The King and I

Interesting, but could have been so much better

My book club read this title, and I cringed almost from the start. Firstly, Breslin complains about egos in the opera world, but his was outsized as well. He wrote things like, “Most of the best things that were happening in classical music at the time were coming through me.” Pompous much? He also gets in some backhanded compliments and thinly-veiled digs, to the effect of, say what you want about Kiri Te Kanawa, she isn’t much of a talent, but audiences love her. Breslin would have done himself a service by resisting the urge to backbite and keeping things professional. That said, the book did provide an interesting glimpse into the world of opera and how it works, as well as into the career of Luciano Pavarotti. Secondly, the writing is stilted, and the narration worse. A narrator should be able to properly pronounce the words in the book, including the names of operas. At times, the narrator sounded like a monotone third grader reading his “what I did on my summer vacation” paper.

For starters, this audiobook is more about how ingenious and clever the author is — and less about one of the most acclaimed and beloved tenors of all time. Not until about halfway through the book does the listener get a real glimpse into the life of Luciano Pavarotti. Furthermore, the writing isn't just mediocre — it's embarrassingly bad. And the narration is awful. Was there any attempt made by the narrator to learn in pre-production how to properly pronounce the names of the various operas and opera singers mentioned throughout the book? Although I am a huge fan of Luciano Pavarotti, I was extremely disappointed with this book. I do not recommend it.