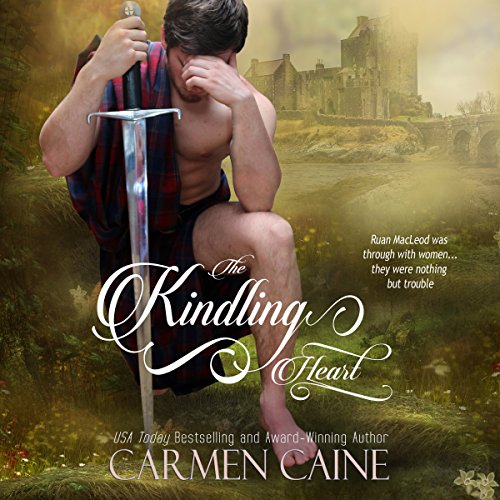 By: Carmen Caine
Narrated by: Katrina Holmes
Try for £0.00

Scotland, 1478. Ruan MacLeod was through with women. They were nothing but trouble.

Leaving the rash life of his youth behind, he returned to Skye, seeking peace. He never meant to split the clan, or start a war with the MacDonald of Duntulm. He certainly never foresaw an arranged marriage to the most scandalous woman in Scotland. Even though she was twice his age, the size of a horse, and mother to more than one illegitimate child, he agreed to secure his sister's freedom.

However, even that plan goes drastically awry. On his wedding day, he finds himself faced instead, with an enticing, green-eyed lass named Bree. A walking disaster, his bride immediately turns his world into chaos, and threatens to melt his resolve never to love again.

Betrayed by her own mother, Bree flees to Skye, thinking only to reunite with her long, lost father. Instead, she finds herself wed to Ruan MacLeod as a replacement bride. When she is forced to remain in the castle, she is soon caught between brothers, and the mentally ill wife of the laird.

Shy, yet strong, Bree embarks on a journey of independence, and learns along the way that all men are not necessarily evil. In fact, one particularly brooding, yet gentle-hearted warrior, is worthy of love, and she soon loses her heart forever.

What listeners say about The Kindling Heart

I love Highlands romance books, but in this one the female main actor is highly displayed like a weak dumb girl. Maybe it is the story itself, but the reading supports it in the way she gives her a voice.

why is the narrator American and not Scottish the series is set in the highlands this makes no sense!!!!

This story is completely not worth the time in my opinion. The female lead never spoke out about anyting. Whether the problem was big or small she never voiced her opinion. The only time she ever gave her opinion was when she can take it anymore and she would babble out a stream of nonsense to whoever was listening. She would also attack the men who were being kind and gentle with her but would do nothing to the ones who would abuse her. The male lead was just a complete dunce. He would constantly run away from the reality of his situation rather than face it. The people around him had to inform him of what was going on because he wanted to deny the facts. Also the overall story was really bland and boring. I think it was unnecessarily long and drawn-out.

I found that Bree was a little naive. And always accusing Ryan of wrong doing and never willing ask him what the truth was. Narrator sound a little childish. I think story would had been better if they had a better narrator. Over all the story was pretty good

I had a very hard time listening to this book after awhile. I found my empathy with Brie waning chapter by chapter. They say people who were abused tend to abuse, but there’s no excuse for it. I’m sorry there’s no excuse for a woman to hurt a man! It’s just as wrong!!! I get she was frightened, but seriously. After she lashed out at him once and he never even touches her, you’d think she’d get a clue? But no. She just keep hitting him, kicking him, etc. I didn’t like her one bit, and I didn’t appreciate the double standard.

What I liked: The story. It was Interesting, and had some unique parts. I found that I was intrigued from the beginning. I liked The hero a lot, and I also really liked the relationship between him, his uncle, and the heroines father. The romantic relationship between the hero and the heroine took a long time to develop, but for the most part it kept my attention and I didn’t get bored. The narration was decent.

What I did not like: Because it took a long time for the two main characters to get together, I was expecting fireworks when they did. Especially because the author was often very descriptive in her writing of fights and bruises... dresses and moors... so I assumed she would be descriptive in writing about their adult union too. But instead, the author just kind of breezed over their first full romantic encounter. I felt like I waited in line for a long time, and then when I finally got to the main event I was completely disappointed in the show. Although I like the hero, the heroin at times was very annoying. She is described as a Spitfire, but then many times she couldn’t find her own voice, or and was completely ineffective and weak. Her character was set up to behave one way, but then in some scenes would behave completely out of character.

This book had a long slow fuse, only to fizzle out. It’s kind of a cute and interesting tale, and narration was good, but wasn’t worth the time I put into it.

Quick to the end

I was dismayed at how quickly the book concluded after the villian was vanquished. Felt like the author had the minimum number of pages completed, so the conclusion was short and quick. I would also have liked a little more character development of Cameron whose wives kept dying. Something is amiss, but nobody is wondering what's going on?