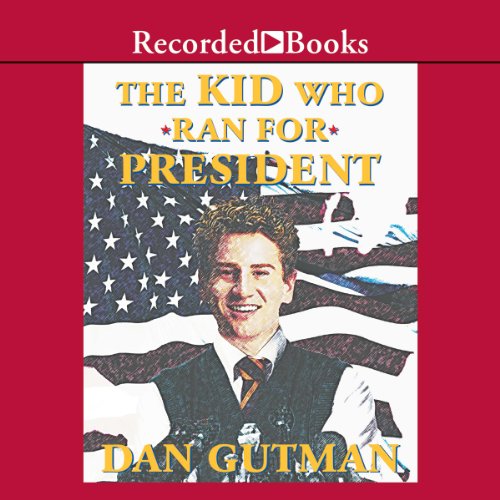 The Kid Who Ran for President

The Kid Who Ran for President

Some kids want to be President when they grow up. Twelve-year-old Judson Moon wants to be President right now! "Grown-ups have had a thousand years to mess up the world," Judson explains. "Now it's our turn." But running for President is hard. You have to kiss a zillion babies and shake a zillion hands, and say a zillion 'hellos'." There's the tough decision about which girl in your school you should ask to be First Babe. Also, selling 80 million cups of lemonade is a slow way to finance a campaign. And there's an unfair constitutional provision against kids running for President that needs to be changed.

Dan Gutman's entertaining account of Judson's quest for the White House slyly mixes lessons about U.S. history and government with a story full of unexpected twists. Scott Shina's hilarious narration will have listeners laughing as they hum "Hail to the Chief".

great book. great story. he could have made all the progressive changes though. but then again, he didn't understand the issues yet. so can't complain.

Fun book, for children of all ages!

If you could sum up The Kid Who Ran for President in three words, what would they be?

Although I was 55 when I read it, I enjoyed it very much. With a very depressing presidential election, it was nice to listen to a book that put a lighter touch on politics.

The main character because he reminds of me at his age. I ran for office when I was 18, which was when I could first legally vote. I totally understand the characters in this story!

Have you listened to any of Scott Shina’s other performances before? How does this one compare?

Not that I know of.