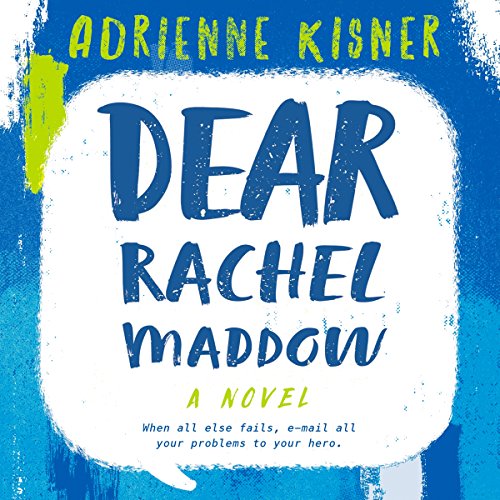 In Adrienne Kisner's Dear Rachel Maddow, a high school girl deals with school politics and life after her brother’s death by drafting emails to MSNBC host Rachel Maddow in this funny and heartfelt YA debut audiobook

Brynn Haper's life has one steadying force - Rachel Maddow. She watches her daily, and after writing to Rachel for a school project - and actually getting a response - Brynn starts drafting emails to Rachel but never sending them. Brynn tells Rachel about breaking up with her first serious girlfriend, about her brother Nick's death, about her passive mother and even worse stepfather, about how she's stuck in remedial courses at school and is considering dropping out.

Then Brynn is confronted with a moral dilemma. One student representative will be allowed to have a voice among the administration in the selection of a new school superintendent. Brynn's archnemesis, Adam, and ex-girlfriend, Sarah, believe only Honors students are worthy of the selection committee seat. Brynn feels all students deserve a voice. When she runs for the position, the knives are out. So she begins to ask herself: What Would Rachel Maddow Do?

"Khristine Hvam does a stellar narration of this young adult epistolary novel...Hvam's portrayal of Brynn is spot-on, breathing life into the character's personality. Even with the serious subject matter, Hvam delivers an engaging performance." — AudioFile Magazine

Truth: I added this book to my TBR after only seeing the title. I was intrigued and I didn't need to know anything else about the book. It turned out to be a really interesting premise - made up entirely of emails. This story is well written and fast-paced. Even tho it's set around characters in high school, the topics the story tackles are applicable to readers of all ages. I loved the impeccable balance of emotion, humor, diversity, and political references. A book I definitely recommend picking up.