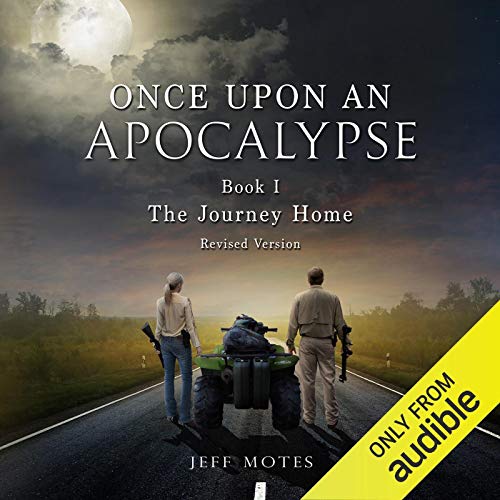 Jill Barnes, a single mom, finds herself stranded on the side of Interstate 459 near Birmingham, Alabama. Jack Chance, a bank vice president, is stranded on Interstate 85 near Montgomery, Alabama. John Carter, a contractor, finds himself stranded near Leeds, Alabama. Each has a different mind-set and level of preparedness. Follow them as they make their decisions and journey home to Clarke County in rural Southwest Alabama.

Author's note: This is a new performance of the revised version of book one. It has been revised to reflect a first-person point of view for each chapter's main character. Take note of which character leads in the chapter title.

This is not a book on religion or religious ideology; however, two of the main characters are Christian. They pray often and acknowledge God's influence upon the events taking place. If you find praying, acknowledging God, or seeing Jesus' name used in a positive context offensive, then I suggest you do not listen to this book.

What listeners say about The Journey Home: Revised Edition

The storyline overall was well written, but unfortunately for me, there was way too much praying and referencing of Jesus. To the point were it just got on my nerves. A book in my view should be neutral to all to enjoy, it’s a shame as it’s subject matter is something I really enjoy. Not for me sorry.

Bad! I was sooo disappointed!

I could not even finish listening to this book it was so bad and so boring!!!

Wow. A great and informative story.

Different than any other post-apocalyptic I've encountered before. Fast moving, gripping and informative. A great character study on the preparedness mindset.

You can give this to your wife or mother or daughter without hesitation.

Using both male and female voice actors is refreshingly different.

Shows how important it is to always travel with a backpack full of everything you would need should it take you 5 days approximately to get home if an EMP hits when you are in your car. The lists they give are great of what to put in the backpack & all the other information is good too, about what kind of danger you can meet on the road trying to get home, and how fast that danger hits after an EMP does. This is not to be taken lightly but very seriously in the days were living in. Make sure you have a piece of paper ready and a pen for when they give you certain notes because I believe they're imperative for survival. It's also a very good story and you will enjoy it.

I have listened to several EMP book series and this one is at the top of my list of favorites. I think the character development is great and that it give a good look into how quickly things can fall apart. The story is compelling with some great hidden tips to pick up along the way. The second book in the series is great too.

Makes me wonder how prepared I am and/or should be! I love how they hold true to their Christian beliefs and live them out in spite of taking the easy or 'safe' choices. #InspiringChallenge #FuturisticThriller #Modern #tagsgiving #sweepstakes

this was my first audiobook and i was hooked from the start i loved this series jeff you did a great job writing this i binged all three books back to back i cant wait for your next piece of work!

A good portion of the book was repetitive and filled with unnecessary details. The characters were barely believable. The writing varied from well written to childish writing. It felt like a very rough draft. Many times I wanted to quit listening, but the basic story line itself was good and I did want to find out if they made it home.

Would you recommend The Journey Home: Revised Edition to your friends? Why or why not?

I would not recommend it to anyone. Not an enjoyable book to listen to. Might be OK as a paperback that can be skimmed between the good parts.

What didn’t you like about Holly Henrichs and Michael Stadler ’s performance?

Their voices didn't usually match what was going on, especially Holly's voice. Her voice along with the details written by the author made Jill, a main character, sound stupid and childish most of the time.

I struggle to write this because I actually liked the story and characters quite a lot. I'm a big fan of this genre and the story was different enough to keep my interest. Here's where I struggle. The dialogue was very forced and unnatural. Many times I would think that while somebody would say something similar to what the character did your average person would not do it in that particular, very stiff way. The narration didn't help either. It uses 2 narrators who alternate chapters and also within conversations, making the book more of a performance than a narration. That would have been great if the narrators were actually decent actors (which they are not) and the dialogue wasn't so poor to begin with.

However, like I said, the story itself was good, the characters likable and the author is good at setting a scene. The characters are religious, so if that turns you off be prepared for frequent brief prayers. I'm not religious and I didn't find it off putting. I do have to agree with another reviewer that I was a little annoyed that the 'traditional' roles between the genders, but not enough to not make me dislike them.

The story may be good but I won’t know. The narrators were absolutely horrible. Bad fake southern accents and whiny male voice. I couldn’t take it and returned both Jeff Motes books I had purchased.

The narration is more terrifying then a real EMP attack

Worst narrators I’ve heard on audible. Actually painful to listen too. Couldn’t get through 8 chapters!

I wish I had picked something else. The narration is horrible and the story is flat.