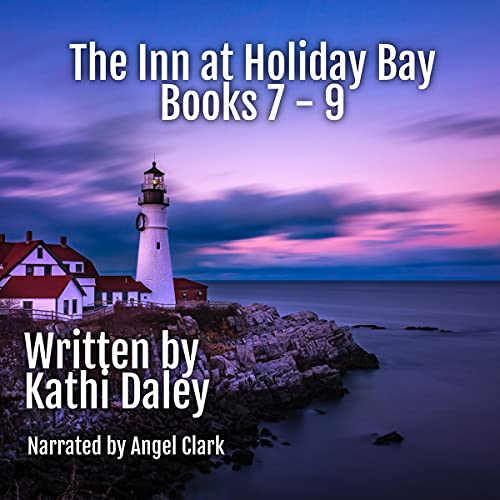 By: Kathi Daley
Narrated by: Angel Clark
Try for £0.00

A heartwarming cozy mystery series about losing everything, taking a chance, and starting again.

After suffering a personal tragedy, Abby Sullivan buys a huge old seaside mansion she has never even seen, packs up her life in San Francisco, and moves to Holiday Bay Maine, where she is adopted, quite against her will, by a huge Maine Coon Cat named Rufus, a drifter with her own tragic past named Georgia, and a giant dog with an inferiority complex named Ramos. What Abby thought she needed was alone time to heal. What she ended up with was, an inn she never knew she wanted, a cat she couldn't seem to convince to leave, and a new family she'd never be able to live without.

In book seven in the series, a whole new group of guests check into the Inn each with their own reason for being there and their own story to tell. Once of the guests, a single woman named Mylie, finds a long forgotten letter to Santa in the mouth of the life sized nutcracker Lacy purchased for Abby after a visit to an antique store. The list does not ask Santa for toys or games but for time with her parents. The note also lists the activities the child wishes they could do together over Christmas such as building a snowman and taking a sleigh ride. Mylie, who is in Holiday Bay to find her one true love, decides to accomplish all the items on the list herself while she is waiting for Mr. Right to come along. Meanwhile Abby wonders what ever happened to the child who left the list and why the list was still in the nutcracker all these years later. Her research pulls her into an unsolved mystery which she finds herself determined to solve before the arrival of the holiday. While Mylie is busy meeting Mr. Right and accomplishing the tasks on the list, and Abby is busy trying to figure out what became of the child who wrote the list, Georgia is cooking up a storm as she searches for the perfect cookie to enter in a local contest.

In book eight in the series, Abby's agent asks for help when the house she was going to rent to host a writers retreat becomes unavailable. After a bit of discussion, Abby agrees to have the retreat at the inn. The seven writers who will be staying at the inn for the week long event are new to publishing and Kate hopes the mentor she has hired to run things will be able to provide the valuable tips these new authors need. Of course what she doesn't know is that Abby has a past with this particular mentor, and when all is said and done, fireworks of one sort or another are likely. Meanwhile, Georgia has started taping her new cooking show, Abby is worried about the approaching blizzard, and Colt has a murder to solve, after six men get together for a friendly poker game but only five of the six men make it to the end of the night alive.

In book nine in the series, a newly engaged couple rents out the entire inn for their engagement party. As part of their 'making memories' theme they asks guests to take photos and share them with the group. Everyone is having a wonderful time until one of the guests turns up dead.

What listeners say about The Inn at Holiday Bay, Books 7-9