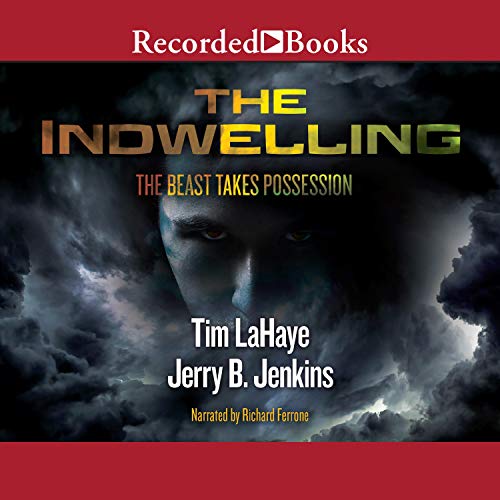 It has been three and a half years since the Rapture took up the bodies of the innocent to Heaven. The prophecies foretell that this is the point when the seven-year Tribulation shall become the Great Tribulation, with the forces of evil tightening their grip on humanity in preparation for the final battle. As the world mourns the death of a renowned leader, the Tribulation Force looks for the next predicted sign, that Satan will take possession of the Antichrist and raise him from the dead!

Creating a thrilling scenario of the end times upon planet Earth, with the ultimate battle between good and evil being waged, the series combines Biblical prophecy with current events. Narrator Richard Ferrone gives a rugged, suspenseful reading to this action-packed continuation of a series that has captured the imagination of people everywhere.

What listeners say about The Indwelling

The only problem with this book is I couldn't put it down. Once I started listening to it I didn't get any of my work done. Great book. Now I can't wait for the next.

Woe unto the inhabiters of the earth and of the sea! for the devil is come down unto you...

As I have said in my reviews of each previous book in the series till this point: If you are a Christian, I would recommend this book to you not only as an excellent work of fiction but as a kind of companion to a Bible study of the book of Revelation. While I am not a minister or a Bible scholar, as a Christian these books are very accurate, and I know my understanding of the book of Revelation has been expanded through this series.
If you are not a Christian, I would recommend this book to you as an excellent work of fiction (which it is), and if it (re)awakens questions you haven’t asked in a very long time, if at all, then I would encourage you to seek answers like the characters in this series. Find a Bible and a church that preaches Christ, that if you are willing to hear it you may know the truth.
Now as for the story. The Indwelling has had me on the edge of my seat its spectacular intensity. This book (and the series as a whole) has excelled at pulling all my heart strings at the proper times. I’ve felt heartbreak at the main death and the pondering each character has about their own demise. I’ve felt joy when the characters are safe physically, and even more joy when some of the undecided become saved spiritually. I’ve felt nausea at the pure evil way the Indwellt Carpathia and those around him pervert the gospel and the very words of Jesus.
I found myself satisfied with The Indwelling from a more academic standpoint on the writing as well. The protagonists are imperfect, often making choices that are realistic, not choices that are right. They have chemistry and interactions that you would expect from this group of people.
The dialogue is realistic as well at times opting for “a and me” instead of the more grammatically correct “a and I”. Not only this but cultural dialogue/measurement differences are portrayed in the dialogue as well; similar to Mack’s and Abdula’s “What is pout?” Exchange a couple of books ago, as well as Chloe having to convert km to mi in Alb’s and Leah’s exchange.
Oh yeah, and the way they use the multiple POVs as a method of inserting cliffhangers throughout the book was aggravating in the best way possible. This created such cinematic pacing that this was a contributing factor to what left me on the edge of my seat the whole time. I will definitely have to try this technique in my own writing.
Ferrone’s narration in this book is the best I’ve heard him so far. His emotion, accents, etc have excelled so much in this book that in a certain dialogue exchange I honestly couldn’t tell if they had brought in another narrator for one of the characters, or if it was still Ferrone.
The dryness he brings to the table has decreased to the point that I would consider the remainder merely a signature of his narrations that only serves to enhance the aptmosphere of this gritty, fallen world- personally I would not change this aspect of his narrations.
I am eager to begin the next one!

As always, love the series...BUT really... I had to slow the narration down to 90% to actually get into the story. I mean what's the rush? I did, however really appreciate the way the narrator incorporated the different voices for the different characters...that was great! But PLEASE, Zion pronounced as Zeon....really?

Loved this series, Biblically accurate, I would recommend them to everyone. A must read series.

enjoyed the story, a little slow on the book other then that good book thank you.

This treatment of the book of Revelation is outstanding. On to the next book !

Needs more than 1 to narrate.

This story line is difficult to follow at times. The same voice for everyone only makes it harder.

Can't wait to start the next book and finish the series. A must read for sure.

I love this series and have all the physical books. So very excited for them to be on audible. My sadness comes in these narration was not done by audible but a diffrent group. This narration is not good very monotone he adds no accents there was a dialog between Rayford and Albie and I could not tell who was talking to who. Sad wish these books could be renarrated.

This series was seared in my mind when I first read it so many years ago. Especially this book. It marks the half-way point of the Tribulation in the series. And it's not exactly a fast moving book, as it only covers a few days. But it's very important. Upon revisiting the book, one realizes how amazing Jerry Jenkins and Tim LaHaye's work truly was. Taking these texts and turning it into a thrilling series is daunting, overwhelming. And they managed to do it. If only they could have known what the world would be like in 2020. So it will be thrilling to hear the Mark when the Anti-Christ is fully indwelled as Satan.

Richard Ferrone's narration is perfect. There are no weak points.