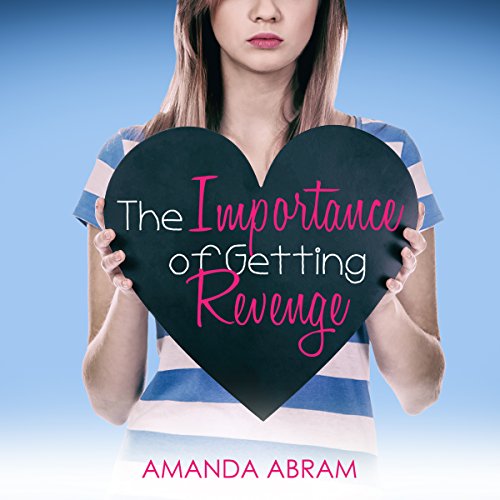 The Importance of Getting Revenge

By: Amanda Abram
Narrated by: Elizabeth Cottle
Try for £0.00

Seventeen-year-old Lexi Turner has just been dumped by her boyfriend of three years - on the day she was going to, well, do it with him. And to make matters worse, he dumped her for a lifeforce-sucking demon!

Devastated by this turn of events, she decides there is only one way to deal with the situation: get revenge.

Enter Jase Holloway - Lexi's former childhood friend and adversary to her ex. The plan is simple: somehow talk Jase into pretending to be her boyfriend to make her ex-boyfriend jealous, make him regret dumping her, and make him come crawling back to her on his hands and knees, begging for forgiveness....

What listeners say about The Importance of Getting Revenge

Lovely story of a teen romance. Easy listening, likeable characters and cute.
The performance is not the best but I've heard worse.
Overall I'd recommend.

I enjoyed this book I won't say it's a must read but it's still a nice book to relax an listen to....the story line is good my only down side is it needed abit more emotion between the characters but that is just my opinion but I did enjoy as is

It was a predictable storyline. Typical lack of communication, teen angst, melodrama, poor choices, high school social hierarchy and the works. I liked the characters and enjoyed the book.

Okay, I have to admit I dig this book! I truly love the chemistry of Lex and Jase & I love her friendship with Trish. It totally surpass my expectations. I will read her next book, Challenge Accepted. It seems Amanda Abram haven’t written for awhile but I hope she continues. This was a fun & delightful read for me! I bought it & the audio is a plus!!!!!

I get that high school is tough. I've been there. However, the whole "beautiful girl with a vivacious best friend who outshines her, falls for rugged bad boy, while complaining ad nauseam about how ugly she is" has got to be one of the most annoying and trite YA Romance tropes out there. "Young boy, come save this virginal teenager from her self image issues, that she projects onto *literally every male in her life that she isn't related to.*" I would have thrown my device across the room had I heard "if I wore make up, maybe I wouldn't be alone" one more time. Sheesh.

The narration was incredible. The actual book could use a self esteem boost. There were some physically uncomfortable scenes associated with the heroine (narrator) being so self deprecating that she actually embarrasses herself. Once so badly I had to actually turn off the recording to unpack what she did, second hand embarrassment consuming me.

I thought this was a really cute story with quite a few laughs. I liked most of the characters but loved Lexi and Eric. I did think Lexi should have taken up for herself more and told Jase, Trish and Jeffery to get lost. They were all kind of mean to her. Some of the things they said were really mean especially some of the things Jase said to her. I really thought Lexi and Eric should have just ditched all of them and dated each other. Over all this was a good story. I would like to see more from this writer.

I laughed during this mess

The Story was such a big mess .. but it did make me laugh at some point, I do relate with Lexi, sometimes revenge is the only thing you can do if someone hurt you .. I liked Lexi though I was annoyed by some of her behavior, what I liked best about her is her friendship with Trish, these girls are friendship goals .. they always support each other no matter what .. and they kept their friendship in a healthy status even everything went down hill
but annoyed me most about this story is Jase .. he is such a jerk I really couldn't figure him out most of the time .. I liked him sometimes but mostly I was annoyed by him .. Eric ( Jase's friend) is adorable, so glad he got his happy ending :D
The book was fine and I have nothing against it .. but I guess the drama of Jase is too much for me

The Narration was excellent .. it captured the essence of the story so well and I can't say anything about it except I really applaud the narrator .. keep going :)