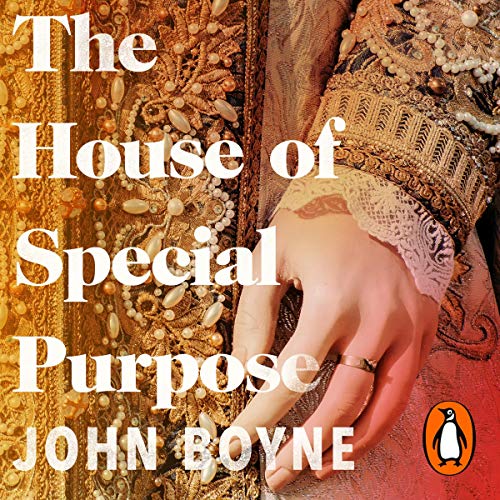 The House of Special Purpose

Russia, 1915: at the age of 16, Georgy Jachmenev steps in front of an assassin's bullet intended for the heart of a senior member of the Russian imperial family. He is instantly proclaimed a hero. Before the week is out, his life as the son of a peasant farmer is changed forever when he is escorted to St Petersburg to take up his new position - as bodyguard to Alexei Romanov, the only son of Tsar Nicholas II.

Sixty-five years later, visiting his wife, Zoya, as she lies dying in a London hospital, memories of the life they have lived together flood his mind. Their marriage, while tender, has been marked by tragedy, the loss of loved ones and experiences of exile that neither can forget.

The House of Special Purpose is a novel about a young man ripped from a loving home and thrust into the heart of a dying empire. Privy to the secrets of Nicholas and Alexandra, the machinations of Rasputin and the events which led to the final collapse of the autocracy, Georgy is a witness and participant in a drama which will echo down the century. His is also a story of a marriage in which a husband finds it impossible to live in the present and a wife unable to reconcile herself with the past.

Part love story, part historical epic, part tragedy, the novel moves from revolutionary St Petersburg to Paris after the First World War, and from London during the Blitz to the eastern coast of Finland during the 1980s, before returning to a quiet hospital bed where Georgy and Zoya's story must finally be resolved.

What listeners say about The House of Special Purpose

Loved it, best book I've read on a long time. Great story with a bit of history thrown in. If only this was true!

Had to give up on this....narration appalling....excruciating "Russian" accent completely unnecessary I felt. Ordered the book instead otherwise the story would be ruined for me. Very disappointing.

Loved the book. The narrator has a pleasant voice and when he narrates it is awesome. The dialogue however, he does in English with a Russian or French accent, which sucks. The Russian I could get used to, but the French was horrible.

I loved the book but I was surprised that such an established actor did such a poor job of narration. The accents were a bit cringe throughout (omg has he ever been to France?!) but he also failed to pronounce simple things correctly. Holborn? Scion? And surely a Russian would have no problem with Solidarnosc and Lech Walesa. The book deserved better.