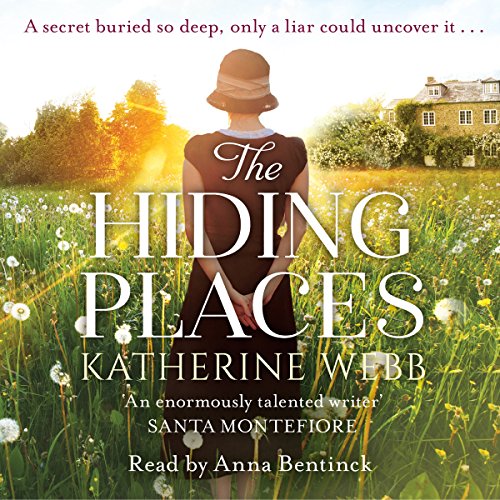 By: Katherine Webb
Narrated by: Anna Bentinck
Try for £0.00

'What could be more important than finding the truth?'

Wiltshire, 1922. Fifteen-year old Pudding Cartwright has begun the career she always wanted, as 'girl groom' to the Hadleigh family's horses at Manor Farm. Irene Hadleigh is struggling to adjust to her new life in sleepy Slaughterford, having married Alistair to escape a scandal in London. At a loss to occupy herself, Irene sets about restyling Manor Farm, and during the work the chance finding of a strange object hidden away in the house for years will change everything.

When somebody close to both of them is murdered, Pudding and Irene are thrown together to seek out the identity of the killer in their midst, unaware of just how deep the roots of the crime lie. During a hot, humid summer of grief, betrayal and misapprehensions, they will uncover truths neither of them could ever have foreseen.

What listeners say about The Hiding Places

Great twists throughout the book. Easy to imagine the characters and scenes. Good reader and fully recommend

a must listen to

I enjoyed this so much and although parts were heart braking, it was so worth it!

This is a brilliant book, a gentle start but before you have time to realise you are thoroughly absorbed. A tale of love, trust, respect, family ties, betrayal and the the worst traits of human nature. It kept me hooked till the end. The characters are believable, human, somewhat flawed and warm. The twists and turns are the thing that makes this an incredible story, it was not the predictable storyline I had expected. Heartbreaking on times but highly recommend.

Although the narrative is good it struggled to hold my interest and I found my mind wandering at times. The story comes across as a little weak at times and I failed to engage with any of the characters to the point of actually caring about them.
Well written but not to the standard of Santa Montefiore for example.
A pleasant enough listen if you don’t expect too much.

I knew there was something I was missing as the book was read to me, read in a lovely calm and captivating voice BTW, and when it clicked, when the story started to conclude, it was a marvellous revelation. Off to download another Katherine Webb book now.

Odd narration let the story down.

I've listened to books before by this narrator which I've enjoyed but this time it really wasn't great. The wrong intonation became annoying, as did the unsubtle correction of mistakes. The book itself was OK, well researched and fluffy but the jumps in time zones wasn't clear, leading to confusion. Its not put me off the author but only gets a 3 out of 5, at best.

I loved this story, so beautifully written and narrated. I felt I was in the story, part of it. The characters were so plausible and believable. Neither did it end before I felt completely satisfied, it felt like I was eating a delicious meal slowly as I savoured every taste of it and felt beautifully satiated at the end.

would recommend, but not Webb at her finest

Slow at the start. We're introduced to many characters and three protagonists very early on and this made it a disjointed read for me at the beginning. But, the plot picked up and the characters became layered. I enjoyed this.

There was a very good ending with surprising revelations. I would recommend it, but it is my least favourite Webb novel, much preferred "The Legacy", "A Half forgotten Song" and "The Unseen".

Bit slow to start, but once comprehending the characters and the plot, some twists make gripping reading. Enjoyed the book and it's imagery of the life, times and countryside were very vivid and convincing.