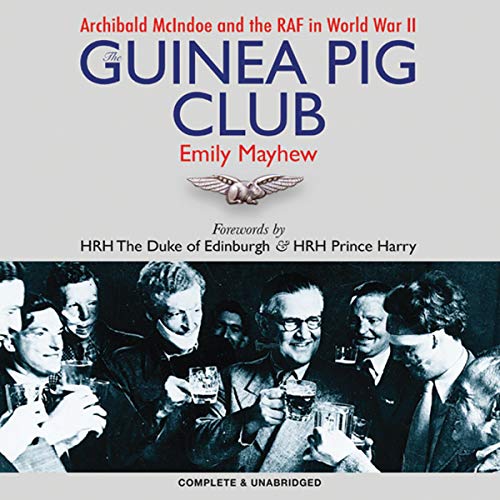 By: Emily Mayhew
Narrated by: Karen Cass
Try for £0.00

The history of the Guinea Pig Club, the band of airmen who were seriously burned in aeroplane fires, is a truly inspiring, spine-tingling tale. Plastic surgery was in its infancy before the Second World War. The most rudimentary techniques were known only to a few surgeons worldwide.

The Allies were tremendously fortunate in having maverick surgeon Archibald McIndoe - nicknamed ‘the Boss’, or ‘the Maestro’ - operating at a small hospital in East Grinstead in the south of England. McIndoe constructed a medical infrastructure from scratch.

After arguing with his superiors, he set up a revolutionary new treatment regime. Uniquely concerned with the social environment, or holistic care, McIndoe also enlisted the help of the local civilian population. He rightly secured his group of patients, dubbed the ‘Guinea Pig Club’, an honoured place in society as heroes of Britain’s war.

What listeners say about The Guinea Pig Club

Remarkable account of the bravery and camaraderie of this group in the second world war. Well researched and written, the work immerses the reader (listener) in the tales of the men that gave so much and the efforts made to repay them. Narration is performed very well and in no way detracts from the writing. A wonderful book well with anyone's time.

Bravest of the brave

The story of the most amazing men. It’s fairly mechanical, but it gives you the straight story of what RAF men went through he suffered from burns, skin grafts, etc during WWII. They truly we’re the bravest of men. Karen Cass’s narration is superb.