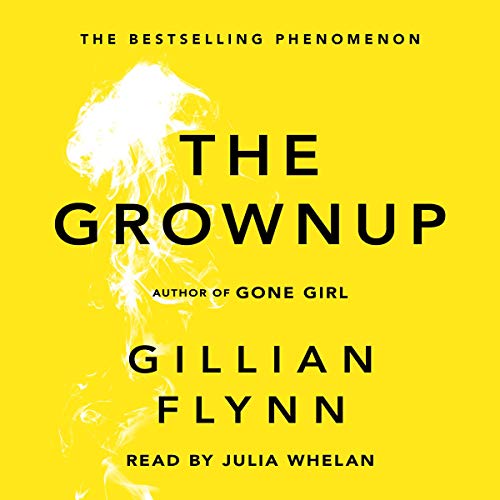 By: Gillian Flynn
Narrated by: Julia Whelan
Try for £0.00

The Edgar-winning short story from the author of Gone Girl.

A young woman is making a living, faking it as a cut-price psychic working at Spiritual Palms (with some illegal soft-core sex work on the side). She makes a decent wage - mostly by telling people what they want to hear.

But then she meets Susan Burke. Susan moved to the city one year ago with her husband and 15-year-old stepson, Miles. They live in a Victorian house called Carterhook Manor, built in 1893. Susan has become convinced that some malevolent spirit is inhabiting their home and taking possession of the stepson. She has even found trickles of blood on the wall.

The young woman doesn't believe in exorcism or the supernatural, but she does see an opportunity to make a lot of money. However, when she enters the house for the first time and meets Miles, she begins to feel it, too, as if the very house is watching her, waiting, biding its time....

'The Grownup', which originally appeared as 'What Do You Do' in George R. R. Martin's Rogues anthology, proves once again that Gillian Flynn is one of the world's most original and skilled voices in fiction.

What listeners say about The Grownup

narrator was perfect for the story.

Really liked the story. I just wish it was longer. felt it was unfinished. It left me wanting more.

A different and interesting story

This will leave you hanging until the last word. Great narrator, loved every seconds of it.

Why is this not a full length book? Amazingly captivating and full of detail, I couldn't stop listening even for a minute. one of my favourites.

The story was good until it got towards the end where it seemed rushed, like they just stuck any old ending on it. Really disappointed.

What made the experience of listening to The Grownup the most enjoyable?

The narrator and emphasis really brought the story to life. And made me laugh in places

What was one of the most memorable moments of The Grownup?

What does Julia Whelan bring to the story that you wouldn’t experience if you had only read the book?

Brings it to life

Only negative- I want more!!

This was excellently performed by Julia Whelan and I must say I was very impressed by her clear differences in each character's voice. She is particularly very good at young children's voices even though she only had very little to say as that character.

Gillian Flynn naturally took me by surprise. He always does. Fantastic author, hooking story and very well written. Everything believable. And once again, powerful female characters which is a nice change when looking at most decent thrillers.

As I said in the title, I just wanted more!

Great story only wish it wasn't so short. I felt she could have made it last longer.

This is actually perfect in every way. It left me wanting more. Surely, her next full length book is due to be published soon?