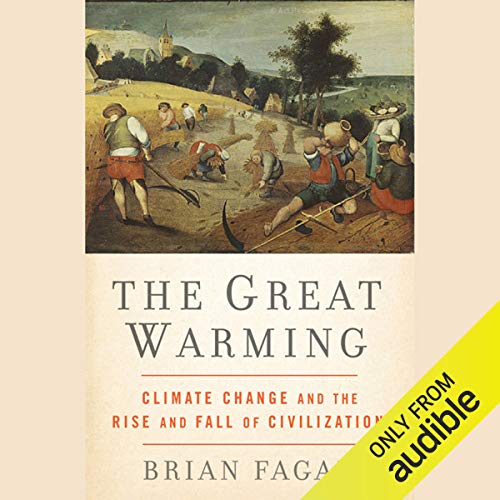 By: Brian Fagan
Narrated by: Tavia Gilbert
Try for £0.00

A breakout best seller on how the earth's previous global warming phase reshaped human societies from the Arctic to the Sahara.

From the 10th to the 15th centuries, the earth experienced a rise in surface temperature that changed climate worldwide, a preview of today's global warming. In some areas, including Western Europe, longer summers brought bountiful harvests and population growth that led to cultural flowering. In the Arctic, Inuit and Norse sailors made cultural connections across thousands of miles as they traded precious iron goods. Polynesian sailors, riding new wind patterns, were able to settle the remotest islands on earth. But in many parts of the world, the warm centuries brought drought and famine. Elaborate societies in western and Central America collapsed, and the vast building complexes of Chaco Canyon and the Mayan Yucatn were left empty.

The history of the Great Warming of a half millennium ago suggests that we may yet be underestimating the power of climate change to disrupt our lives today - and our vulnerability to drought, writes Fagan, is the silent elephant in the room.

“Brian Fagan offers a unique contribution to this discussion [of climate change]...Readers should not underestimate this book, writing it off as another addition to a burgeoning genre: the travel guide to a torrid world. Fagan’s project is much bigger. He re-creates past societies in a lively and engaging manner, aided by his expert synthesis of obscure climatological data...In his ability to bring nature into our global, historical narratives, Fagan rivals...scholars who revealed to large audiences the explanatory power of microscopic biota or gross geography. Fagan promises to do the same for longterm climate dynamics...We would be fools to ignore his warnings.” ( American Scholar)

What listeners say about The Great Warming

A fascinating piece of research and valuable history lesson.
Maybe some of the chapter introductions are a bit flowery/misplaced and certainly the endless unit conversions (metres/miles/acres etc etc) don't work well in the audio book.
The conclusion is simply mind-blowing in its self-contradictory rampant alarmism with added confusion between computer model outputs and actual reality. It really does set a gold standard for verbal diarrhoea but thankfully it's relatively brief.

Ms. Gilbert reads this book with a premium on the enunciation of each word, with cohesiveness suffering badly. She's like a prancing pony; dancing all around the words and hitting the individual words with accuracy, but the sentences themselves (not to mention paragraphs) suffer from herky-jerky, over-enunciated discontinuity. Because of her untargeted verbal thrashings, she occasionally runs out of breath toward the end of the sentence! What now, young pony?

It's like listening to a 10th-grader who's asked to read an unfamiliar passage for a speech audition. I'm going to have to buy the book, because listening to this audiobook is just not working.

I Learned So Much Listening to this Book

This book is a fine, excellently-narrated history of a well-documented story of world-wide climate change, the Medieval Warming Period of 800-1300 AD. During this time, the Western European climate warmed to the point that more diverse crops could be planted and great explorations could be undertaken. During this time, the Vikings were able to settle Greenland, Iceland, and even go as far west as North America. The flip side of this climate change is also documented - great droughts in Western North America, Central America and South America, dooming Native American, Mayan and various South American civilizations. A very interesting, concise overview of the world-wide effects of a warming period, and speculation and warnings about what would be in store this time around should a similar event occur again. Very factual without being boring, alarmist or preachy. Highly recommended.

What the Last Warming Period Can Teach Us Today

This is a fascinating look back on ancient civilizations that coped with global warming and local climate changes and severe weather events. It definitely makes one think about our current climatic changes and how we'll need to adapt.

Overall this is a good book – the rhythm of the reader was very good – I usually listen to this while I was walking or walking the dog. The flow of the book was between good and excellent. The data that she presented appeared to be accurate for the most part. Very interesting. I would listen to it again. I can recommend this book. However, as she is very focused on just the past millennium, there was a bit of weakness for overall geology. On the other hand it appeared to be quite strong as pertains to anthropological climate factors – and I especially liked the tie-in with the Mongol hordes and how they spread and it was climate related both at the spreading and at the shrinking of the Mongol Empire. Of course, this was looking at it through a climate change at the time rather than all the other political factors which would require another book about the Mongols (which I have also listen to on Genghis Khan).

interesting take on possible impact of climate change using fascinating scientific /historic info. But in making the case the chapters are terribly redundant. a long listen.

A study of the obvious: Droughts kill people

Would you try another book from Brian Fagan and/or Tavia Gilbert?

No. He is much too much in love with Al Gore

What could Brian Fagan have done to make this a more enjoyable book for you?

Forget Al Gore. Droughts have been the bane of civilizations forever and they will continue to be. Al Gore and his buddies cannot do anything about it.Only a few of the stories he told were news. He didn't even mention the fall of the Eastern Roman Empire and the rise of Islam. That would be much more interesting than how the Easter Islanders ate themselves out of existance.

The narrator did fine.

I am interested in why history happens and there were a few tidbits in there.

This guy needs to get out of his echo chamber and read his own material. Climate always changes