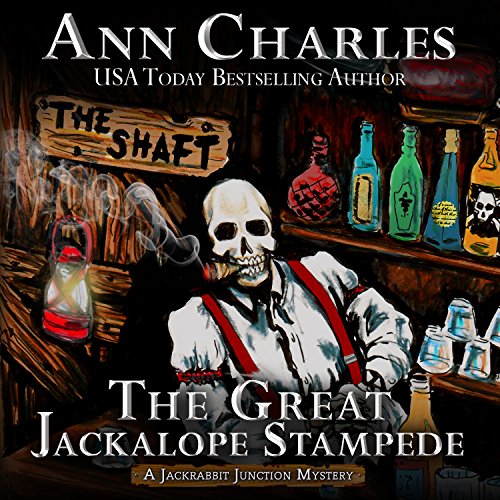 Not since the Great Jackalope Stampede of '58 has tumbleweed-choked Jackrabbit Junction, Arizona seen so much action. Claire Morgan is determined to unravel the mystery behind a stolen treasure before goons come gunning for it - and her family. But all the strangers roaming around town have her anxiety red-lining. Then her mother shows up....

Where is the end?

I listened to hours and hours of this book, and all of a sudden it ended...the first two of the series did have a more complete wrap up and let you know there will another sequel. This one just seems to expect you to buy the next one and continue in order to see what happens and it seemed to be more about sex than a plot.

With the 3rd book in the series the Morgan sisters do not disappoint. The fun continues and who is going for that treasure and who is just strangers passing threw. Oh yeah and Clair’s Mom is back at it again.

such a great series so sad that there's only one left enjoy the Story from beginning to end love how the characters feel familiar.great job

Looking for love in all the wrong places

Would you be willing to try another book from Ann Charles? Why or why not?

Yes, the story was a fun listen.

Seems like the most important story line is the search for sexual gratification, rather than the actual mystery...detracts from the story. No wonder the place is called Jackrabbit Junction. Reminds me of a time years ago when my mother told a male relative that he had "morals of a jackrabbit."

The Great Jackalope Stampede is the third book in the Jackrabbit Junction series, and as a third book it ups the stakes in the mystery and expands the cast of characters.

If you’ve been following along, we have the series star Claire up to her regular hijinks. Claire is one of those women who has studied a lot, but doesn’t have much to show for it in terms of actual university degrees or gainful employment. What she does have is a varied skill set that is quite useful for the mysteries she finds herself embroiled in.

The new mystery is yet another effect of the deceitful things Ruby’s ex-husband Joe got up to. This creates something new for Claire to obsess about, and obsess she does. She invariably finds her way into peril, but solves the mystery by the end. There are also subplots with a stolen watch, potential pregnancies, a gang of rebellious old ladies, and Ronnie (Veronica) getting over the humiliation of her marriage and divorce.

Those new to the series may wonder if starting on the 3rd book is even doable. There are some books where you can enter at any point, and I would say that this one could be like that. The basic points of the previous books are referenced so readers won’t feel lost.

Deborah was a thorn in everyone’s sides in book 2 (Jackrabbit Jitters), but she’s not actually on the page much in this book. Oddly enough, I missed her this time around. I did enjoy the twist plot with her near the end, though, especially since it was with one of my favorite male secondary characters.

Cousin Natalie was a nice addition. I had to check if she was a cross-over character with the author’s Deadwood series, but it seems she is not. If Ann Charles wants to continue this series, she could do it with a focus on Natalie returning to Jackrabbit Junction. I would suggest, though, that she try to come up with a plot other than the effects of Joe’s thieving ways.

One thing the author has done all through the series is mention country songs of various types and ages. Music plays a big part of what’s going on, and it’s a cute way to add flavor to the story.

Her other bit of flavor is how obsessed with bid euchre the main characters are. I used to play spades a lot and almost learned how to play euchre. It’s something else that provides good character setting since it’s completely realistic that people from South Dakota would play indoor card games, especially in winter, and that they’d also use this game in the hot of summer in Arizona to stay out of the heat.

For the performance of the audiobook itself, Lisa Larsen did great with this. I enjoyed what she did for the first two books, and she did not disappoint here. New characters sound different, and established characters sound the same. We don’t have moments of wondering just who is speaking. Lisa even sings a passage or two in the character of one of the drunk sisters singing Patsy Cline. (And who hasn’t ever tried a line or two of “Crazy”?) I like what she’s done here, and I’d be perfectly willing to follow Lisa into other audiobook projects she has.

Disclaimer: I received a free Audible download of this book from the narrator in exchange for an honest review.