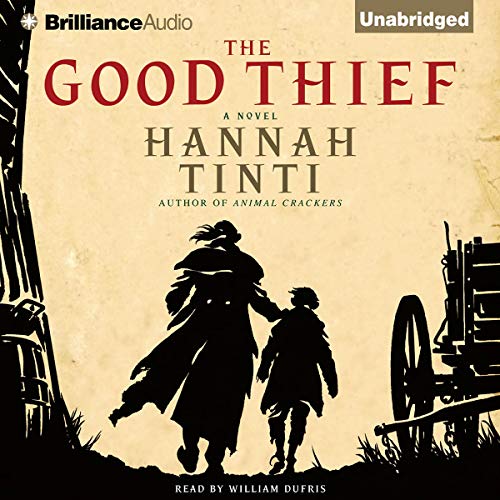 Vivid language, larger-than-life characters, and an old-fashioned, spell-binding story propel this fable-like tale forward from one adventure to the next in Hannah Tinti's critically-acclaimed debut novel The Good Thief. if Tinti had written this book (released in 2008) a century and a half ago, readers would have lined up at newspaper stands each week for the next installments of the story about a plucky, one-armed orphan named Ren and the odd characters he encounters in grim, 19th-century industrial towns across New England soon after he's adopted from Saint Anthony's orphanage.

Fans of Charles Dickens, particularly Oliver Twist, will feel right at home as Tinti writes about con artists, thieves, monks, grave robbers, questionable doctors, a kindly boarding house matron, a ruthless factory owner, a dwarf who lives in a chimney, and a giant who rises from the dead. And like Dickens, Tinti keeps her descriptions and sentences short, getting straight to what matters and leaving out the rest.

Such characters might sound like figments of a drunken sailor's imagination as he tells a tall tale in a seaside saloon after returning from a round-the-world voyage. And in some cases, some of the stories are just that, especially when they're told by Benjamin Nabb, the con artist and natural storyteller who adopts Ren. But this book is not science fiction. Like a magically realistic Latin American novel, all of the characters and events are grounded in reality, no matter how far-fetched they may sound.

Such plausibility is thanks partly to William Dufris, who narrates the audiobook. Dufris captures the voices of each distinct character and brings them all to life, whether it's letter-dropping New England "faamers", the slow-talking, deep-voiced giant named Dolly, the "mouse trap" girl with a lisp, the shouts of the hard-of-hearing boarding house operator, or the harsh, menacing tone of the factory owner. Dufris especially does a great job of portraying Ren's innocence while not making him sound too childlike. But like the fictional character Benjamin Nabb, Dufris rises to the challenge and delivers a story that would keep any sailor nailed to his seat for hours.

Best of all, Tinti keeps you guessing until the very last minute about how this book will end. And while you will probably not predict the ending, you believe every word. No easy task. Then again, Tinti's no ordinary writer. Ken Ross

Twelve-year-old Ren doesn't know who his parents were. He doesn't know who left him at St. Anthony's orphanage, or how he lost his left hand when still an infant. He is resigned to life without a family to call his own and terrified of the future.

But then a young man named Benjamin Nab appears, claiming to be Ren's long-lost brother, and his convincing tale of how Ren lost his hand and his parents is enough to persuade the monks at the orphanage to release the boy. But is Benjamin really who he says he is? Journeying through the New England of whaling towns and meadowed farmlands, Ren is introduced by Ben to a vibrant world of hardscrabble adventure. Ultimately he is apprenticed to Ben's small band of resurrection men, those thieves of the night who steal bodies and sell them to hospitals for medical examination. If Ren stays, he becomes one of them. If he goes, he's lost once again. Most importantly, does Benjamin hold the key to the mystery of his - or their - parents, the defining question of Ren's life?

Richly imagined, gothically spooky, and showcasing the storytelling ability of a born novelist, Hannah Tinti's The Good Thief introduces one of the most appealing young heroes in contemporary fiction, and ratifies Hannah Tinti as one of our most exciting talents.

What listeners say about The Good Thief

How did I end up listening to this?

I am terrible for adding books to my wishlist on a whim, then later wondering what about them led me to add them; the plot? the author? the narrator? the cover?. Mostly I find the reason, one of the aforementioned, and mostly, but not always, I will stick with my whim and download the book. Rarely have I regretted books chosen in this way. In this case it was one of a large number of books narrated by William Dufris, then I homed in on the plot etc, and downloaded it. Not my usual choice of subject matter and so on, but had I not been looking for something 'different'? Yes I had, and yes indeed, in this novel I found that something 'different', very different! I was yearning. You can read the plot synoposis elsewhere. All I will say is that this book is very unusual, slightly Dickensian, very Gothic, very atmospheric, slightly surreal and a little scary in parts, but turned out to be an excellent and very satisfying listen from start to finish. Anyone looking for something a bit unusual? You won't be disappointed. The narration is just wonderful.

Close But No Cigar?

Loved the story! Plot was particularly well thought out and offered a number of suprises. The mood too was well articulated, fog and unease. But most of the characters were a bit one dimensional. I loved them as they were all quirky and strange but I did not believe in them for a minute! They needed a back story to make them real. This is one of those books that should have been longer with more time invested in fleshing out the cast. Still, a good romp!

I felt the first half of the book was very slow. I had a hard time making myself read/listen to the storyline. It picked up after halfway. I did not like the ending and felt it could have been better, more descriptive and clean. Definitely not a fan of this book.

It should be a required read For HS

This Story makes you consider whether there are moral absolutes. The story is well written and very well performed. It is somewhat analogous to Dicken’s “David Copperfield”.

An entertaining novel with interesting twists. It made a long drive go quickly. I found no valuable take-always to make it a five star read. It was nice.

Loved the story line. Ren is such a strong character and there were so many twists and turns that always kept me on my toes. I couldn't stop listening!!! I STRONGLY recommend this book to pretty much anyone.

I love this book, I can't get sleep while listening to it, that is how amazing the book is, but the narrator really stinks, not as bad as others…

The Good Thief seems to be a classic picaresque tale, or a humorous adventure tale involving a rogue living by only his wits in a corrupt society. Usually satire is involved, although I'm not sure if that's the case in this book. Maybe I just don't like picaresque novels? Anyway, this one seemed to really have no point. Perhaps if I thought it were satirizing something, that would give it a point. Instead, it just seemed to be endless mis-adventures that were completely improbable and added up to nothing. It went on and on with one plot twist after another. It was hard to get attached to any of the characters because they were so cartoonish. Although the ending did serve to wrap it things up nicely, it, too, seemed pretty implausible.