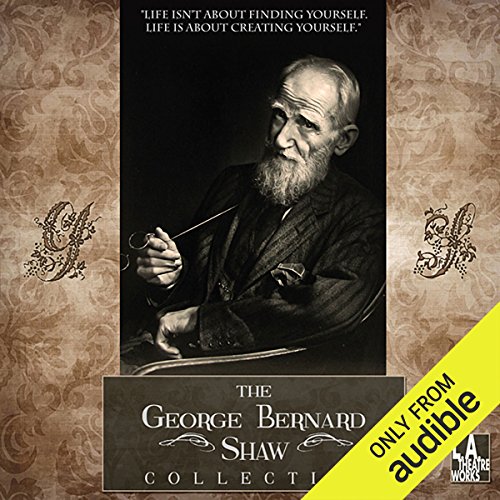 Eight of George Bernard Shaw's most memorable plays in one splendid collection:

Mrs. Warren’s Profession: Shaw pits a clever heroine against a memorable gallery of rogues in this superbly intelligent and still shocking comedy, which was banned for eight years from the English stage after its London debut. Performed by Shirley Knight, et al.

Arms and the Man: The beautiful, headstrong Raina awaits her fiancé’s return from battle – but instead meets a soldier who seeks asylum in her bedroom. Performed by Anne Heche, et al.

Candida: Shaw’s warm and witty play challenged conventional wisdom about relationships between the sexes, as a beautiful wife must choose between the two men who love her. Performed by JoBeth Williams, et al.

The Devil’s Disciple: A young hero who disdains heroism makes the ultimate sacrifice for honor and country during the American Revolution. Performed by Richard Dreyfuss, et al.

The Doctor’s Dilemma: A well-respected physician is forced to choose whom he shall save: a bumbling friend or the ne’er-do-well husband of the woman he loves. Performed by Martin Jarvis, Paxton Whitehead, et al.

Misalliance: A self-made millionaire and his family invite their future in-law for a visit to their estate. In this delightfully clever play, issues of gender, class, politics, and family are all targets for Shaw’s keen wit. Performed by Roger Rees, Eric Stoltz, et al.

Pygmalion: Shaw’s beloved play about an irascible speech professor who decides to mold a Cockney flower girl into the darling of high society. Performed by Shannon Cochran, et al.

What listeners say about The George Bernard Shaw Collection

to find the correct play I figured out the chapters, do note that Misalliance lacks a queue in the beginning.

the performances are great and the plays themselves are of course wonderful
the lack of ANY organization or naming of Scenes, Acts or the Plays themselves in the root menu, which are split into several hundred 4 or so minute parts, across the 8 play collection make it cumbersome and impossible to navigate. it would be so easy to correct this and make this collection functional and user friendly.

I hesitated getting a long collection of plays in audio, concerned it might be too dry or boring. This collection of eight Shaw plays was performed wonderfully and was a joy to listen to. It turns out a collection of great plays is a really nice choice for a long drive with the family. These plays are still witty and penetrating. The casting is excellent with different enough voices to allow the characters to be clear. There are a few cases of stage-craft that you lose in audio-only; nevertheless the experience is well worth the time. This was the first collection of audible plays I have ordered, but having enjoyed it so much, I just ordered several more collections from the same theater company.

Yes, if they have a a curmudgenly nature coupled with a residual belief in the innate dignity of human beings. It is not for those who have succumbed to the xenophobic newspeak of our times.

What other book might you compare The George Bernard Shaw Collection to and why?

The obvious comparisons are to the plays of Noel Coward and Oscar Wilde. All three expressing a bemused view of humanity that veers toward cynicism, with Coward descending into acidic bitterness. The three are like homemade lemonade with varying levels of sugar--Noel sometimes forgetting to add any sugar at all.

The performances are lively without going over the top. It cannot be better than a good live performance, but it is a nice change from a dry read.

I have one complaint, something that really annoys me (possibly others), that applies to all Audible compilations I have experienced. The 'Chapters' are completely anonymous. It is impossible to jump directly to one of the later plays. One has to 'fish' for it. This could be easily fixed by annotating the chapters with the name of the plays.

Riveting, moving performances. Wonderful works performed by various groups. If you like theater, you will love these. So well done I feels like I was present at the performance.

If you are interested in making a survey of all of Shaw's great plays, you can't do any better than this collection! I had begun previously to buy individual plays, and then stumbled on this--what a savings! I didn't think the production of Arms and the Man was very good, but all the rest were excellent.

I took enormous pleasure in listening to these plays. I recommend buying the collection if you like G.B. Shaw.

How can anyone go wrong with Shaw? And Pygmalion...so different from the 'My Fair Lady' movie- which was too romanticized...spend time on this series..

So much bang for the buck!

The only play I wasn't a fan of was the first one - unfortunately that's the one from which audible draws its "sample listen". I wish the beginnings of the plays were marked on the chapters - asking for the acts/scenes would be like asking for the moon.
The productions were great, the actors lovely, and the writing fabulous.

Loved all of it, but especially loved the final chapters which were Pygmalion (my fair lady.) All of the chapters were very well narrated, and George Bernard Shaw is always great, especially at such an inexpensive price.