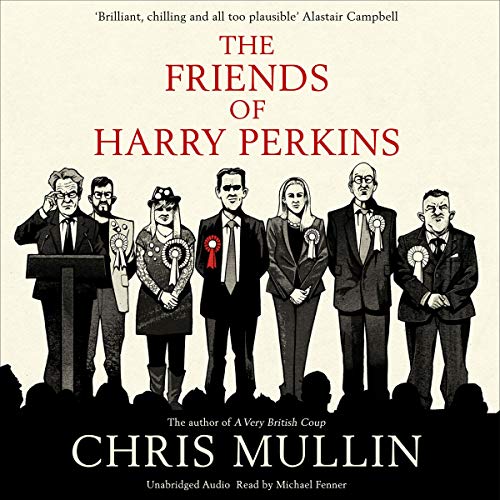 The Friends of Harry Perkins

By: Chris Mullin
Narrated by: Michael Fenner
Try for £0.00

'Harry Perkins was buried on the day that America declared war on China.'

The definitive post-Brexit thriller and long-awaited sequel to the best-selling A Very British Coup.

'Brexit Britain was a gloomy place. True, the Armageddon that some had prophesied had not occurred, but neither had economic miracle promised by the Brexiteers. Instead there had been a long, slow decline into insularity and irrelevance. The value of the pound had fallen steadily against the Euro, the dollar and the yuan. The much vaunted increase in trade with the Commonwealth had not materialised. The Americans, too, were proving particularly obstreperous. Even now, after a nearly decade of negotiations, no significant agreements had been reached. At the UN there was talk of relieving the UK of its seat on the Security Council.'

Thirty-five years after the publication of A Very British Coup, former Labour MP Chris Mullin has written a compelling and timely sequel.

In a near-future, post-Brexit Britain, the fault lines forged in the white heat of the referendum have become entrenched features of British political life. Britain's standing in the world has steadily diminished as its problems have grown. Into the maelstrom steps Fred Thompson, former aide to left-wing Prime Minister Harry Perkins and his successor as MP for Sheffield Parkside.

As he ascends the greasy pole of British politics, Thompson must deal with corruption, the threat of the Far Right and personal tragedy. Along the way, he learns that power does not come without a personal price and that shadowy forces are at work behind the scenes...which, this time, appear to be on his side.

At once a gripping political thriller and a chilling prognostication of where we may be headed, this taut, insightful and engrossing novel is essential listening for our troubled times.

What listeners say about The Friends of Harry Perkins

I enjoyed this. A little respite from my usual crime fiction. I would have loved it to be longer!

I really liked the original book ("A very British Coup") but I am afraid this sequel is very bad. It is basically a combination of anti-brexit polemic, wishful thinking and gut-churning sentimentality. Wouldn't want to create a spoiler for the end but this in particular is a complete let down; inconclusive, pointless and with another dose of sickly sweet attempted tear jerking.

The only positive thing I can say for the book is that the narrator is pretty good.

I absolutely loved the original 'A very British coup' set at the height of the cold war where a radical socialist government gets overthrown by the military. This by contrast chronicles a 'newish' version of 'New Labour' getting elected and then returning the UK to the pre brexit status quo by re-joining the EU.

I really can't understand why this book was even written, maybe the author just thought... what would ever happen if the Liberal Democrats got elected -- 'Wouldn't it be amazing!'

This short book is well written, gripping and very moving in parts - plus potentially prescient. I shall certainly look out for the author's next book.

Near future political thriller that will age well

Set some years after A Very British Coup this pacy follow up, while painting a bleak, almost dystopia like post-Brexit near future, is utterly riveting. An impressive retrofitting of the Harry Perkins years into contemporary political history works well enough but you don't have to have read the first for this one to work, though it is recommended to understand the journey the novel's protagonist, Fred Thompson, has been on.

Sometimes a good short story is just the ticket and as there is always a political scandal, it's relevant. Well performed.

A short sequel to a cult classic... is it the first post brexit political fiction?

A few interesting details... we have a Bonham-Carter standing as a lib-dem candidate and a reference to Chris Mullin's former constituency of Sunderland South (although it was redesignated before this book was written).

There's probably a longer book with more layers to it that this should have become but as it stands it's a good read with many parallels to Very British Coup.

I would highly recommend

I listened to this in a constant state of irritation at the below average writing, which contrasts with the gripping story. Clunky sentences, littered with arcane terms vie for attention with the plot, which is formulaic, but at the same time well-paced. I enjoyed it nevertheless, so it served its purpose. If you enjoyed "A very British coup", you'll probably enjoy this. I did and I did.

In Keeping With the Best Tradition of A Very British Coup

This sweet yet sad tale is a perfect successor to A Very British Coup in much the same way Fred Thompson hoped to be for Harry Perkins. Beautifully writing, magnificently read, a perfect companion for a quiet day off or a long car journey.