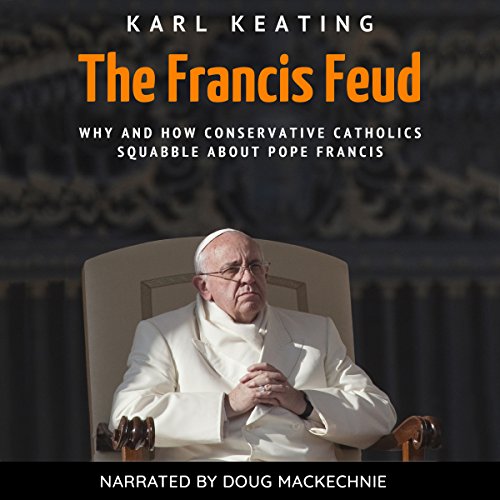 The Francis Feud: Why and How Conservative Catholics Squabble About Pope Francis

By: Karl Keating
Narrated by: Doug MacKechnie
Try for £0.00

But has he ended up making one himself?

This has been the most controversial pontificate in memory. Catholics are taking sides, for and against the pope and each other. Some Catholics like everything Pope Francis says and does. Others think he’s tearing the Church apart. Some say he’s a breath of fresh air. Others say he’s sowing confusion in the ranks.

In recent months three best-selling books have appeared criticizing Francis. Are their criticisms warranted, or do they go too far? How are faithful Catholics to understand this pontificate, and what limits, if any, should there be on criticizing a reigning pope?

Popular author and apologist Karl Keating examines the claims and counter-claims made by prominent Catholics who have a high opinion of the papacy but - many of them - not a high opinion of its current occupant.

What listeners say about The Francis Feud: Why and How Conservative Catholics Squabble About Pope Francis

This book was very disappointing

This book was nothing but the author reading book reviews, blog's, Facebook comments and tweets about other books about Pope Francis. I can't believe I actually listened to 1/2 of it before I asked for a refund.

A Tabloid Criticism of the Catholic Church

I was looking for something more closely tied to authentic Catholic teaching and doctrine. In my opinion, Mr. Keating has written is a "tabloid" style exposé on other “Catholic” authors. Also, this is the first audio book I have encountered where the narrator keeps clearing his voice during the reading! The author just goes on and on with his criticisms with citing and published doctrine or recognized sound “Catholic” authors. Recommend to individual is looking for something contemporary to read about the Catholic Church, I would suggest: George Weigel; Peter Kreeft; Cardinal Timothy Dolan; Bishop Robert Barron; or the publication contain the “Nihil obstat” and/or “Imprimatur”. Finally, I am not implying that individuals should not be informed about their “religion” but be aware of what you are reading. (Audio Book)