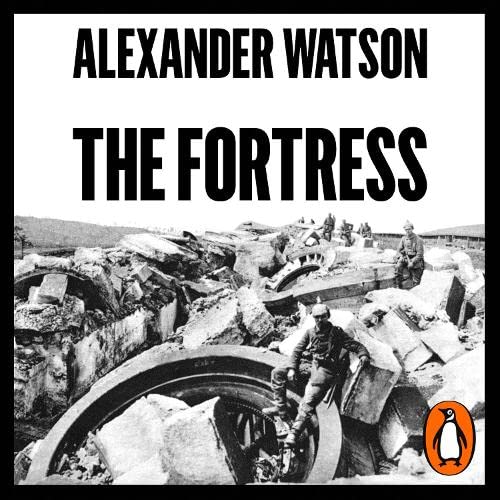 By: Alexander Watson
Narrated by: Laurence Dobiesz
Try for £0.00

From the prize-winning author of Ring of Steel, a gripping history of the First World War's longest and most terrible siege.

In the autumn of 1914 Europe was at war. The battling powers had already suffered casualties on a scale previously unimaginable. On both the Western and Eastern fronts elaborate war plans lay in ruins and had been discarded in favour of desperate improvisation. In the West this resulted in the remorseless world of the trenches; in the East all eyes were focused on the old, beleaguered Austro-Hungarian fortress of Przemysl.

The siege that unfolded at Przemysl was the longest of the whole war. In the defence of the fortress and the struggle to relieve it Austria-Hungary suffered some 800,000 casualties. Almost unknown in the West, this was one of the great turning points of the conflict. If the Russians had broken through they could have invaded Central Europe, but by the time the fortress fell their strength was so sapped they could go no further.

Alexander Watson, prize-winning author of Ring of Steel, has written one of the great epics of the First World War. Comparable to Stalingrad in 1942-3, Przemysl shaped the course of Europe's future. Neither Russians nor Austro-Hungarians ever recovered from their disasters. Using a huge range of sources, Watson brilliantly re-creates a world of long-gone empires, broken armies and a cut-off community sliding into chaos. The siege was central to the war itself but also a chilling harbinger of what would engulf the entire region in the coming decades, as nationalism, anti-Semitism and an exterminatory fury took hold.

What listeners say about The Fortress

A critical period of European history, little understood until now, ethnic cleansing long before the Reich

Oooops because I now need to read more on the Eastern Front. A fantastic, well written book. When reading about the Western Front I can visualise the locations the author is referring too and link that location to battles and offensives and how they fit into the overall historiography of the FWW. I had to keep stopping to look at maps and key events to try and understand where the Siege of Przemysl fitted in. A book to definitely revisit once my understanding of that front improves.

Notwithstanding all the above, a great book which takes the reader to the heart of the siege, wonderfully researched and written. A must for those with a FWW interest. Naively I wasn't aware antisemitism was so rife in the FWW on the Eastern Front, i wrongly assumed it was a SWW phenomenon. More reading needed on my part.

A truely mesmorising account of the life and death of the Przemysl Fortress complex. Great individual accounts of soldiers and inhabitants of the city and the incompetence of the Habsburg military class during WWI.

The Fortress was a microcosmos of Austria-Hungary and decisive in the first part of the war.

Clearly narrated but the content was dry. It jumped back and forth in time in an apparent attempt to add colour and depth. Sadly did I not live up to expectations set by the publisher’s blurb.