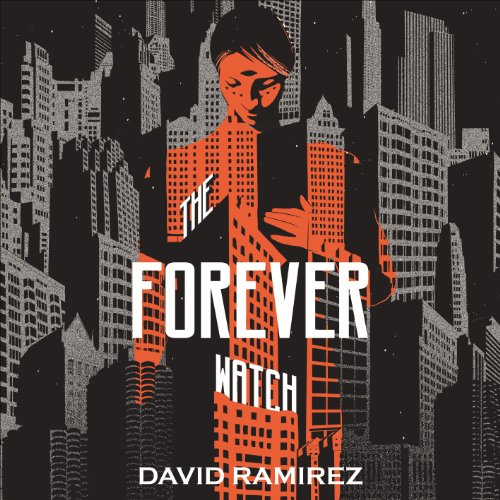 By: David Ramirez
Narrated by: Helen Johns
Try for £0.00

The Noah: a city-sized ship, half-way through an 800-year voyage to another planet. In a world where deeds, and even thoughts, cannot be kept secret, a man is murdered; his body so ruined that his identity must be established from DNA evidence. Within hours, all trace of the crime is swept away, hidden as though it never happened.

Hana Dempsey, a mid-level bureaucrat genetically modified to use the Noah's telepathic internet, begins to investigate. Her search for the truth will uncover the impossible: a serial killer who has been operating on board for a lifetime...if not longer. And behind the killer lies a conspiracy centuries in the making.

"Vivid, action-packed, and yet filled with scientific plausibility, The Forever Watch propels you on a tense voyage of mystery, surprise and discovery." (David Brin)
"A dark sci-fi fable set aboard a multigenerational spaceship that holds humanity's only hope for survival... Intriguing and powerfully disruptive." (Kirkus)
"Superior, psychologically plausible characterizations are combined with sophisticated worldbuilding, clever trope inversion and original plotting to create a powerful story that will amply reward rereading." (Publishers Weekly)

What listeners say about The Forever Watch

This was one of those impulse buys from Audible. It was advertised on the homepage banner and the synopsis sounded interesting. Unfortunately the book did not live up to the synopsis. The story plodded on and I had little attachment to the characters. Some plot points just didn't make much sense - and others your could see a mile off.
I forced myself to plough through the book so at least I could rate in with full knowledge of the story.
This is a standalone novel, but if there is ever a squeal I will pass on it.

The audio book itself was well produced. The narrator did an acceptable job, but it was nothing special.

A very enjoyable audiobook that I would recommend

I thought that this book had a strong storyline with a number of interrelated themes. I enjoy Si-Fi in general but often lament the lack of a well thought out plot that leads to a conclusion that does not disappoint. This book does not suffer from those shortfalls and leads the reader (or listener) through a believable future world. Narration was excellent.

Just listen to it.

This is a great story and delivery. No terrible accents like many audiobooks just a well delivered performance of an interesting book.

Too many concepts, too inplausible; dull narrating

The story itself I didn’t like. It started out very promising with some twists and turns but ended in so many concepts being mixed together that the whole thing seemed too implausible and didn’t really work together.

As for the narrating, it was very bland, I didn’t end up liking the main character and I think this is more due to the narrating rather than the writing so I didn’t really care what happened to anyone in the story.

Something a little lighter and with much better narrating (i.e. a John Scalzi comedy narrated by Will Wheaton).

Would you be willing to try another one of Helen Johns’s performances?

I would definitely be put off buying another audiobook which was narrated by Helen John.

I did like the ending and the general idea but didn't like anything in between I'm afraid.

took me a while to get in to it as I found it a bit ponderous to begin with but it locked in just in time. Narrator was good, story was good, one of them books that would have more impact as a film in my opinion

Would you consider the audio edition of The Forever Watch to be better than the print version?

Probably on a par, but a great listen for long distance journeys.

The initial setup and reveal was very interesting and full of suspense, and the very end was smart and right up there with great SF finishes.

First book I've listened to with a female lead and female voiced. Very interesting as most books I read are male orientated, featuring males as lead, so was very refreshing. this same reasoning made it seem odd at first but actually once i got over my own potential sexism, i thought the performance was very good and emotions ranged in synch with the story excellently. Would look for her voice again.

Yes, the loss in the middle. Cant say more than that without giving it away.

Very ambitious novel from an author I've not read before. Some sequences of it were gripping and a brilliant read. The end third lost it way a bit compared to what was a fantastic first half, but it was made up for by a very smart and elegant finish.

Where does The Forever Watch rank among all the audiobooks you’ve listened to so far?

Its a solid story, with interesting ideas and good characters. Not the among the Iain M Banks of stories, but showed strong promise from the author.

What was one of the most memorable moments of The Forever Watch?

Not a single moment as such but the development relationship between the AI and the lead character was extremely well done.

Solid use of voice changes, with excellent inflection and feeling.

Some things are secret for a reason

Definitely worth a listen, you'll enjoy it.

The Forever Watch is the sort of Sci-fi I fall in love with. Set in a utopian/dystopian future, on a generation ship flying between the stars, it ticks all the boxes, examining themes from state oppression, family and motherhood, freedom and self-determination. There are great twists and turns, none of which I fully anticipated. The audiobook performance was excellent - tender and thoughtful during quieter moments, tense and stark during the darker passages.

Considering this is a first time novel for David Ramirez, I was surprised by the depth of this book, and would fully recommend it to any fan of the genre.

This novel is a mix of conspiracy thriller, science fiction adventure and dystopian fiction, all set in the far future. Early on, the author spends a lot of time establishing the characters, and describing the depressing dystopian world in which they live. The plot starts out as a slow burn conspiracy thriller. Later on, the story becomes a fast moving science fiction adventure, full of plot twists which call for ever greater suspension of disbelief.

For the most part, I enjoyed The Forever Watch. I found the characters believable and sympathetic. The setting is well worked out. The plot is internally consistent, and contained plenty of twists that I didn't see coming.

However, for me two things slightly spoil the story, making this an OK novel rather than a great one. First, it isn't very original. The story is packed full of science fiction cliches. Second, the constant changes of tone and pace make the story feel disjointed.

The narration is competent throughout. The reader captures the narrator's emotions, but struggles to make the minor characters sound different from each other.

This is a beautiful story with characters I totally fell in love with. The story is modern with many of the qualities that make classic Sci fi so readable. It has a an intricate and complex narrative which is executed wonderfully.

The narration is just perfect, so soulful and emotional. The audio version is the only way you should read this book.

I read a lot of Sci fi and this is an instant favorite.